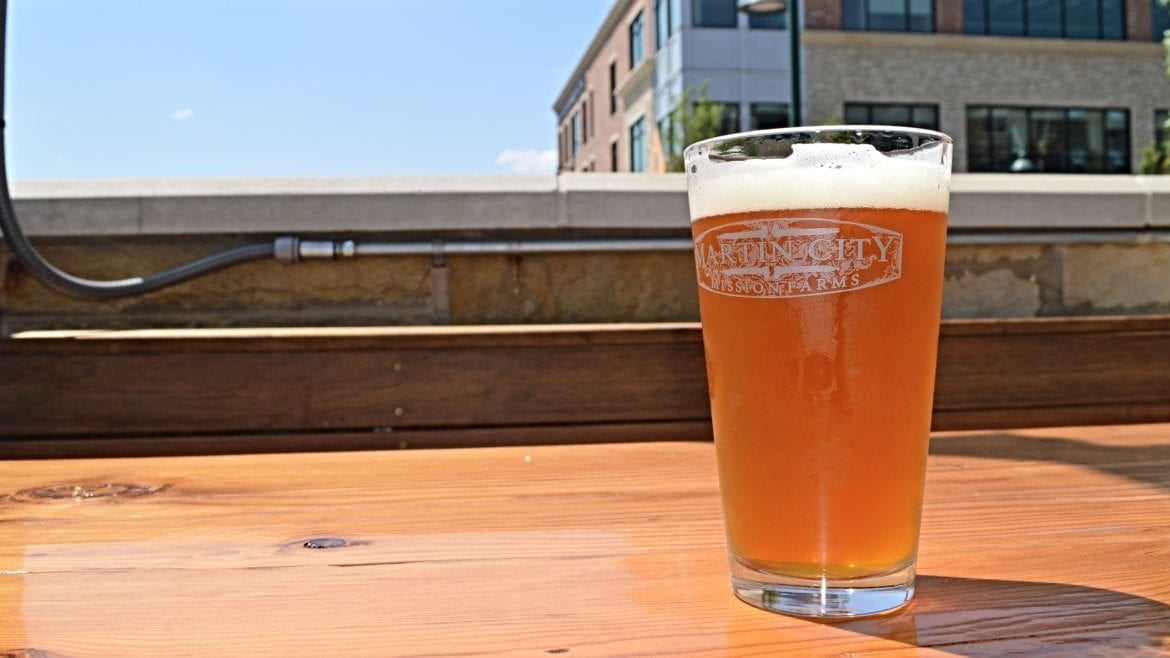 “We made it work in the corner of the universe in Martin City, and we hope we can make it work here,” co-owner Matt Moore said.

Martin City Brewing Company’s first pub opened at 500 E. 135th St. in 2011. MCBC’s Pizza & Taproom, where the brewhouse is located, is just down the street and was added in 2014. The newest location has been in the works since December of last year, which is when general manager and partner Trevor Ashby sent a text to Moore that the Mission Farms location was available. Moore thought the pizza and tap concept would be a good fit for the mixed-use development. Ashby is an industry veteran who has worked at Grunauer and Gram & Dun. 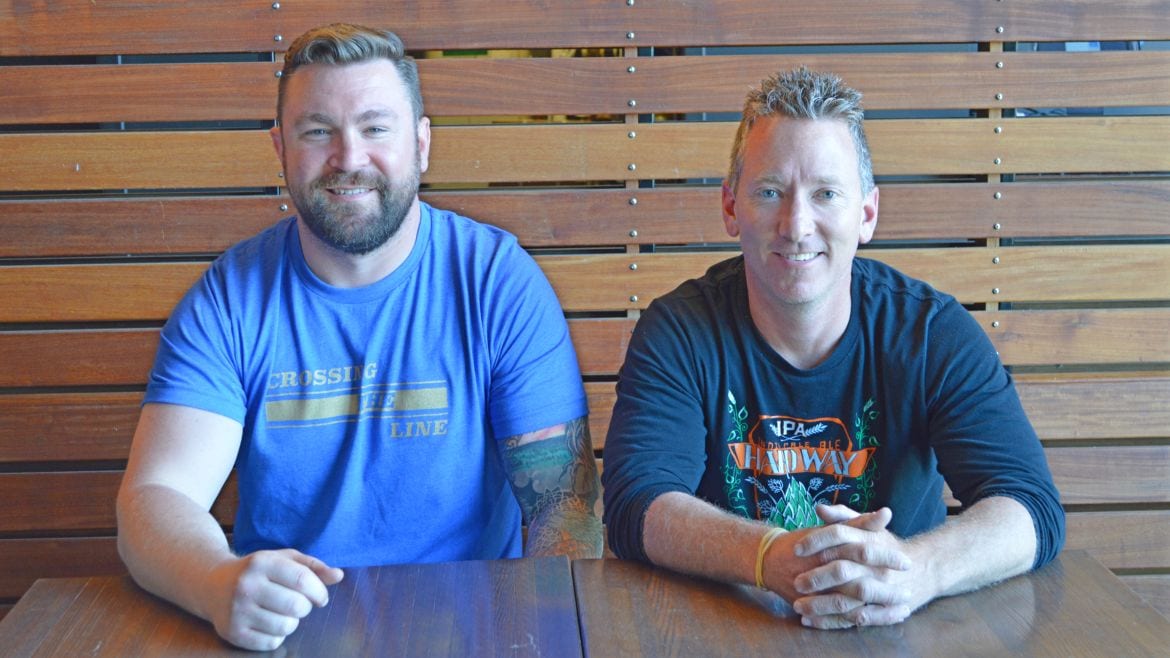 Moore describes the look of Martin City Mission Farms as “rustic-industrial.” Warm brown woods are lit by ornate metal light fixtures created by Moore’s brother-in-law Ryan Lamfers, a metalworking artist out of Georgia. Black and white photos of the brewhouse in Martin City line the walls.

The menu at Mission Farms, overseen by chef Brandon Moore (no relation), will be familiar to those who have been to the taproom. At Mission Farms, they’ll serve stone-fired pizza, Bavarian pretzels, salads and sandwiches. A new addition is Sunday brunch, which includes biscuits and gravy, prime rib and a bloody mary bar.

The pizza oven is twice as big as the one in Martin City. Moore’s go-to pie is the Espana (chorizo, red onions, cherry peppers, tomatoes and manchego cheese).

“The Espana is the best. It’s got sweet sauce, but burn from the peppers,” Moore said. “It’s some meat and some veg; you’re hitting all the food groups.

The Chicken Spanakopita — the top seller in Martin City — is a white pie with chicken, garlic, artichoke hearts, spinach, feta, parmesan and a garlic-Alfredo sauce. For those with a gluten-free diet, gluten-free crust is available, as is Martin City’s Yoga Pants, a gluten-free beer.

Martin City will have a full bar with wine, cocktails and 16 beers on tap. That list currently includes its Belgian Rye Blonde, Yella Agate, a New England-style IPA and Fullfister IPA.

Moore noted that you can expect plenty of small-batch and limited releases, which will only be available in Mission Farms and Martin City. The brewery has a host of beers in the works, including Old Glory Pilsner. The beer, formerly known as Boss Battle, should be out just before the Fourth of July. 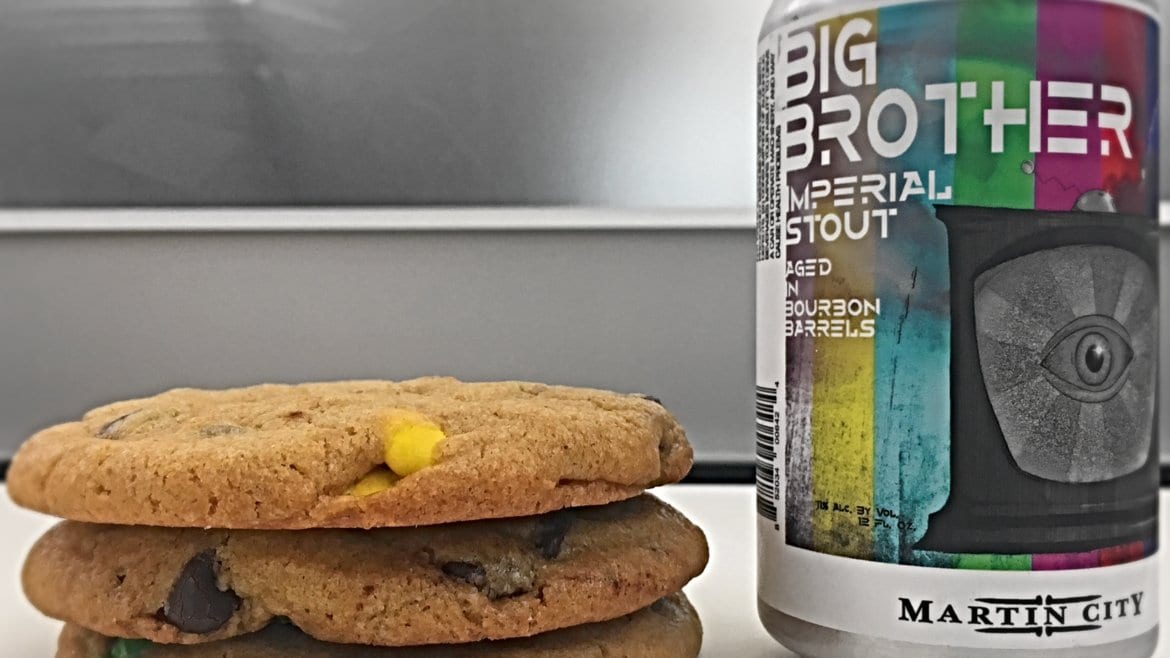 Martin City’s Big Brother Imperial Stout is a big, bourbon-barrel-aged brew that needs a strong cookie in its life. The Go Big Cookie from Heirloom Bakery is a mash-up of peanut butter, chocolate chips and M&M’s (think Monster cookie from your childhood). The beer gets a warm, almost caramel ribbon from the cookie pairing, while the cookie’s peanut butter sings with each sip of Big Brother.

Fest Up | Get Ripped

The Big Rip Brewing Company (216 E. Ninth Ave., North Kansas City, Missouri) is turning five years old, and it’s throwing the Get Ripped! Brew Fest on Saturday, June 2, to celebrate. The party runs from noon to 4 p.m. with a host of local breweries and distilleries participating (Apex Aleworks and SD Strong Distilling, among them). Hawg Jaw BBQ will be on site, and Big Rip will be holding a wiener dog race. Tickets are $30 and include a pint glass. The festival is also a benefit for Miles of Smiles.

23rd Street Brewery (3512 Clinton Parkway, Lawrence, Kansas) has its watermelon wheat on tap. Go ahead and meet summer in a glass.

Miami Creek Brewing Company will be closed this weekend, but it’s got a pair of new drinks in the works. Brewer and owner Will Reece is working on a test apple cider and the Wild Scotsman, a “Scotch ale fermented with rosemary and wild oak.” Colony KC (312 Armour Road, North Kansas City, Missouri) hosts a Star Wars trivia night. The free battle of wits kicks off at 7:30 p.m. If you want get a little funky, they’ve got Impersonator, a peanut butter and banana brown ale that is a nod to Elvis Presley.

Whole Foods (301 E. 51st St.) opens today at 9 a.m. If you’re asking why a grocery store is in a beer column, it’s because of The Fountain Room, a tap room inside of Whole Foods. The Fountain Room has 22 taps with Missouri and Kansas brews, including its own special release: Martin City Brewery’s double dry-hopped Black Rye IPA. Beer is available on draft or to go in 32 or 64-ounce growlers. The taproom will also serve J. Rieger & Co. cocktails, as well as wines from Amigoni, Somerset Ridge and Fence Stile.

Movie magic doesn’t just happen on the big screen. Screenland Armour (408 Armour Road, North Kansas City, Missouri) will have a new barrel-aged brew in honor of “Solo: A Star Wars Story.” Han Shot First is an imperial porter with cinnamon and vanilla. The beer has been aged in Union Horse whiskey barrels for six months. It debuts at 6 p.m. alongside glassware that honors the theater’s 10th anniversary.

Kansas City Bier Co. is hosting a tap takeover at the Lone Elm Taproom inside Whole Foods (14615 W. 119th St., Olathe, Kansas) from 5 to 7 p.m. While you’re there, keep an eye out for mini donuts, the grocery store has a machine that cranks them out to order.

See the breweries of the future at the ninth annual KC Nanobrew Festival from 2 to 6 p.m. at Berkley Riverfront Park. Take a spin through more than 200 homebrews. The festival has grown to include more than beer, you can also sip on mead, kombucha and cider. Tickets are $35.

Stockyards Brewing Co. (1600 Genessee St., Suite 100) has Old Sound, a musical trio, from 3 to 6 p.m. for its Stockyards Sunday series. Check out a new brew, French Bottoms IPA, which is made with rye and wheat malts, as well as Mosiac and Opal hops.

Brewery Emperial (1829 Oak St.) hosts Let’s Get Trivial With Zeb, a free trivia night, starting at 8 p.m. Brewery Emperial just extended its Sunday hours — the kitchen is open until 10 p.m., and the beer flows until 11 p.m.