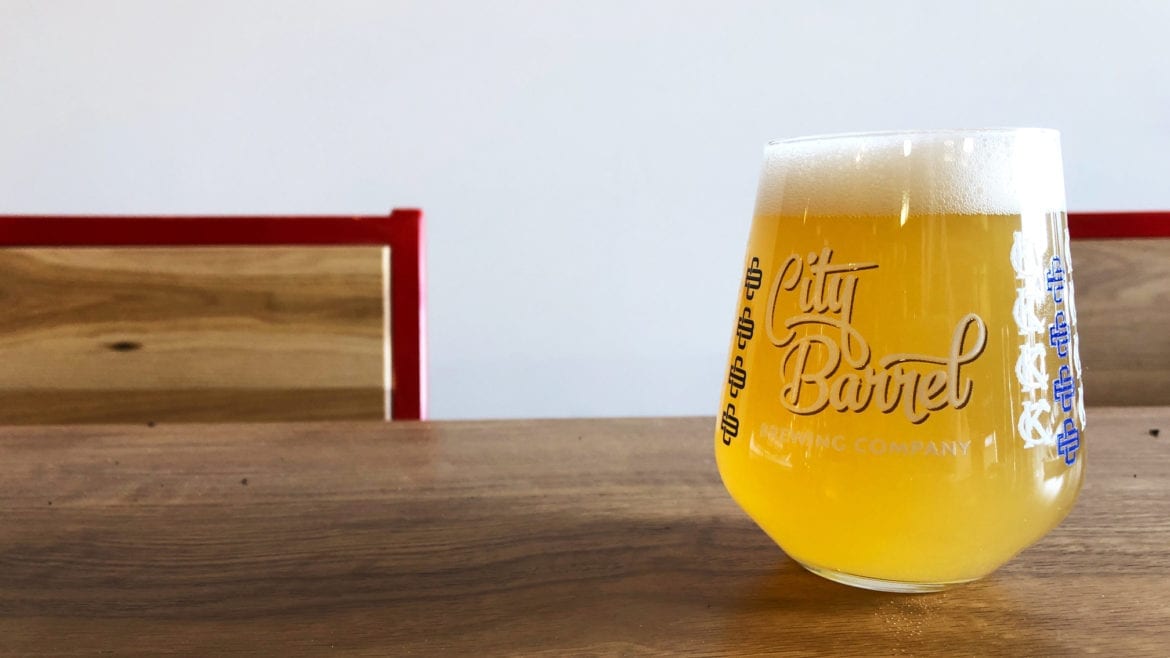 City Barrel Brewing Co. will have six beers on tap, including Rad AF, when it opens this Friday. (Jonathan Bender | Flatland)
Share this story

Shrimp get a quick cure in sour beer at City Barrel Brewing Co. (1740 Holmes St.), which opens this Friday in the Crossroads.

The sour beer ceviche is just one of the reasons — a wine-beer hybrid and brews based on Tiki drinks are among the others — that City Barrel is going to alter your idea of what a brewery in Kansas City should be.

“We’re an open-concept brewery and restaurant,” said co-founder James Stutsman, referring to the fact that visitors can walk through the brewhouse and see into the kitchen. “But we’re most proud of our liquid. And that liquid — wild, hoppy and sour beers — will speak for itself.”

“Rad AF is everything you’d want out of a hazy IPA. It’s got that great, soft mouthfeel. It’s just a juice bomb,” Stutsman said. “With 816, we took everything we knew about a hazy IPA and applied it to a blonde, because we wanted something that appealed to beer nerds and was also approachable.”

The initial lineup is hop heavy. Trouble is the brewery’s West Coast IPA, made with Citra and Amarillo hops. Cashmere is a Brut IPA made with Cashmere hops that Stutsman thinks is the “perfect balance of bubbly and dry — Champagne meets IPA.”

Classy is a semi-sweet beer that pours dark pink thanks to heaps of blueberries, raspberries and cranberries. Ahoy! Is another fruit-forward brew, a sour made with pink guava (700 pounds of fruit), lime and salt, that will rotate with the seasons.

The bar itself, where six beers will be on tap, is a three-foot wide slab of Missouri oak with a live edge. The wood cladding behind the bar is pine reclaimed from the walls of the Nelson-Atkins Museum of Art. If you look closely, nail holes are still visible from where art once hung.

A secret panel in the back wall hides a pair of taps reserved for members (membership, which gets drinkers a discount and access to special releases, will be available starting this Saturday). Those taps will hold Foundation (a golden sour aged in red wine barrels), a sour milkshake (a beer made with lactose to mimic the creaminess of the dessert) and a New England-style IPA made with apricots, raspberries and vanilla bean.

The exposed brick space was designed with Instagram in mind. A square neon sign with the brewery’s tagline, “Love Your City,” awaits between the beer garden and the more formal dining room. The dining room, which has a 10-person chef’s table across from the open kitchen and tables made of Missouri oak, is dotted with sculptures of animal heads, like a white unicorn with a golden horn.

“We’d like to work the beer into the culinary side as much as possible without forcing it,” Stutsman said.

Executive chef Benjamin Wood was previously at the Kauffman Center for the Performing Arts and the Corner Restaurant. City Barrel plans to launch a five-course, beer-paired tasting menu in the coming months. The tasting menu will rotate weekly with two seatings on Friday and Saturday nights.

City Barrel Brewing Finds a Home in The Crossroads