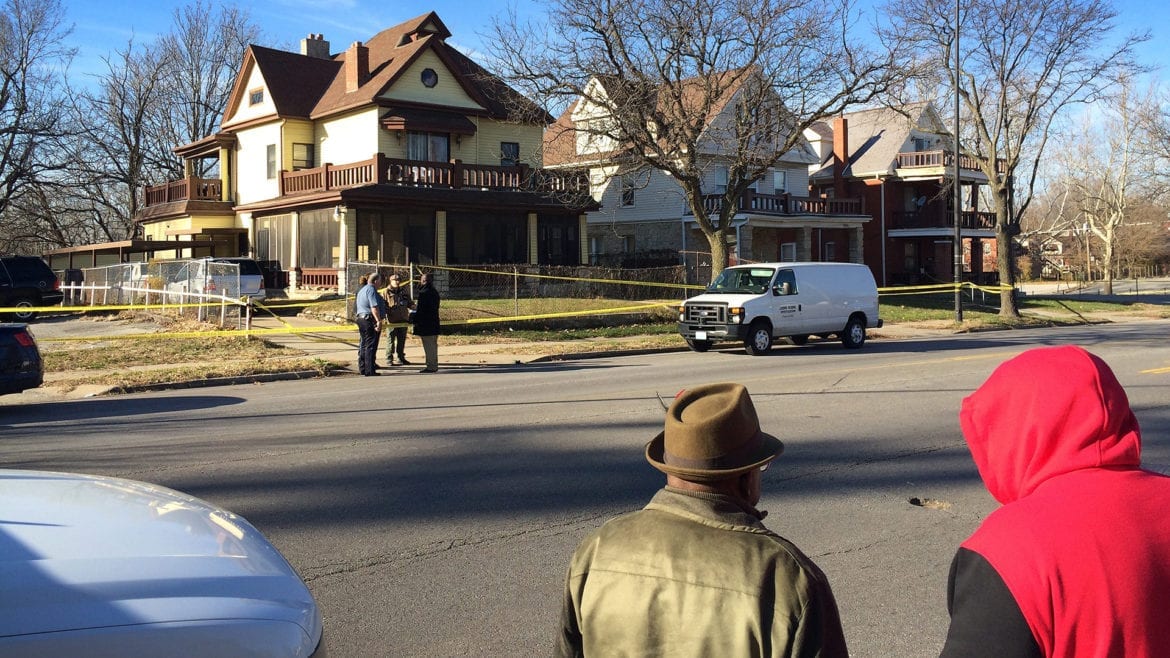 In this Dec. 12, 2015 photo, Kansas City police investigated a fatal shooting after finding a dead man behind a residence in in Kansas City, Mo. (Keith Myers | The Kansas City Star via AP)
Share this story

As mayor of Kansas City, Missouri, Sly James has grown accustomed to phone calls from the police chief about yet another homicide.

Sometimes James goes to the scene, and the details of one, from a Sunday morning, are seared into his memory. A wailing mother, still in her nightgown, was kneeling in the middle of the street — grieving for her child, who had been shot dead as the unintended victim of a drive-by shooting.

“Why!” the mother was screaming.

James told that story during his final State of the City address, which the term-limited mayor delivered on March 26 at Rockhurst University. And taking his cue from that distraught mother, he asked: Why can’t the city and its leaders figure out a way to stop violence and cut the murder rate?

Whoever is elected as the next mayor will be expected to bring answers for a community that, as of the April 2 primary, was on track to meet or exceed last year’s homicide tally of 137 deaths.

City Council members Jolie Justus and Quinton Lucas are the two general election candidates, and whoever wins the June 18 general election could get a boost from a significant revamping of one of Kansas City’s signature anti-violence initiatives.

The program is the Kansas City No Violence Alliance (KC NoVA), a prevention effort started in 2013 as a way to disrupt networks of people prone to violence. It is part of a nationally recognized strategy known as focused deterrence.

The Kansas City Police Department is shifting the program to focus more intentionally on individual violent felons: the people who police believe are the most likely to pull a trigger next.

For months, the department has been combing crime data and criminal records from the past several years, making decisions about who fits their new criteria. Kansas City Deputy Chief David Bosworth has gathered input from all patrol commanders as part of the change.

The new approach is patterned on the Violent Impact Player program in Tampa, Florida, which was recognized late last year by the U.S. Department of Justice as a standout initiative through Project Safe Neighborhoods. Tampa lowered its violent crime by nearly 8 percent.

Kansas City is calling its version Prolific Violent Offender. Bosworth said violence committed during robberies and domestic assaults will be be among the offenses considered, as well as gang affiliations.

NoVA’s initial focus was based on research showing that a small percentage of the population is generally responsible for the vast majority of violent crimes.

“I’m willing to try anything different.”

The mayor, Kansas City police chief and the Jackson County prosecutor help coordinate the program along with regional representatives from several federal agencies, including the FBI; the Bureau of Alcohol, Tobacco, Firearms and Explosives; and the U.S. attorney for the Western District of Missouri.

By teaming with criminologists at the University of Missouri-Kansas City, police created intricate maps tracking groups of people involved with crime and those who are associated with them.

The theory was that if police identified these most violent offenders and their social circles, they could lower the crime rate. The concept included offers of help if people wanted to change.

But the large numbers of people being tracked by their social networks became unwieldy. And with the Jackson County Detention Center overcrowded, the threat of jail time became little more than a “veiled threat,” Bosworth said.

In one stark review of the program posted online late last year, the federal National Institute of Justice placed it in its “no effects” category.

There was an initial drop in homicides the first year of the program, but the analysis concluded that “two years post-implementation, there was no statistically significant impact on homicides, group-member-involved homicides, and aggravated assaults.”

Prolific Violent Offender is aimed at addressing one problem of NoVA’s old approach. Some of the most violent people in the city didn’t belong to any of the social networks police identified, Bosworth said.

Jackson County Prosecutor Jean Peters Baker has been one of the most outspoken advocates of NoVA.

She’s also a student of current strategies in criminal justice, often carrying a book or report that critiques current systems or a thick binder of trial preparation. So she is open to shifting gears if it will positively affect crime and its impact on the community. “I’m willing to try anything different,” she said.

Baker and other NoVA officials are hoping to capitalize on the U.S. Department of Justice’s current emphasis on reducing violent crime, mindful that federal priorities — and funding — can shift as new officials are elected or appointed.

And like Bosworth, the deputy chief, Baker is keenly aware of the problems presented by the Jackson County jail.

She knows that the community expects those who fire guns, as well as those accused of domestic violence and rape, to be locked up. But she also knows that overcrowding and other issues at the jail mean that even violent suspects are not always behind bars as they await trial.

“Not all of our murder defendants are in that jail,” she noted.

Finally, many of the mayoral candidates waxed poetic about their desires to curb violent crime. But there are limitations to what they could accomplish.

Kansas City’s mayor is but one voting member of the Board of Police Commissioners. And Kansas City, unique among large metropolitan areas, doesn’t have local control of that board.

The governor does. This is a throwback initially intended to counter corruption during the era of Prohibition. The governor selects local residents for the board, and the mayor is also guaranteed a seat.

Several candidates for Kansas City’s next mayor expressed support for changing to local control, an idea that arises with some regularity as it could allow citizens here to decide members of the police board and hold them accountable.

The campaign trail also featured a lot of talk of accepting that Kansas City’s violence is a public health issue. That perspective mirrors a growing acknowledgment nationally that unsolved crimes, seemingly endless gun violence and unresolved grief undercut the health and welfare of entire communities.

National experts note that cities that impact their crime rates often do so by understanding the neighborhoods where people are struggling to find work sufficient to meet their family’s needs.

Webster noted that no magic recipe has been found for reducing gun violence, saying that one roadblock is the simple fact that there are more guns in circulation today than there has been in the past.

And he suspected that Missouri’s lax gun laws, in relation to other states, have impacted the sustainability of focused deterrence approaches like KC NoVA.

The next mayor and City Council could address the root causes of crime by earmarking more city funds for low-income neighborhoods. Direct spending on public safety (police, fire and ambulance services) already comprises more than 75 percent of the city’s general operating fund.

The latest budget, approved by the City Council in March, contained funding for 12 additional police officers.

But the department isn’t fully staffed, so new officers are assigned to patrol duty in one of the six division stations based on the needs at the time, said Sgt. Jake Becchina, a department spokesman.

In the end, the bully pulpit is perhaps the single most effective tool the Kansas City mayor has to help reduce the city’s violent crime problem.

And that is something that James, the current mayor, has not been shy about using.

He regularly teamed with political counterparts in St. Louis to try to influence the General Assembly in Jefferson City to tighten licensing and permitting  for firearms, largely to no avail. Police here regularly emphasize that most violent crime in the city is driven by gunfire.

James has long categorized Kansas City’s gun violence, and the resulting trauma it unleashes, as being akin to a “slow-motion mass murder.”

The phrase is emblematic of James’ no-holds-barred oratory. The next mayor might not be quite as blunt, but unless things change, James’ successor might be left asking the same question James posed in that last State of the City address.