Former Manufacturing Hub Could Be Poised For Comeback 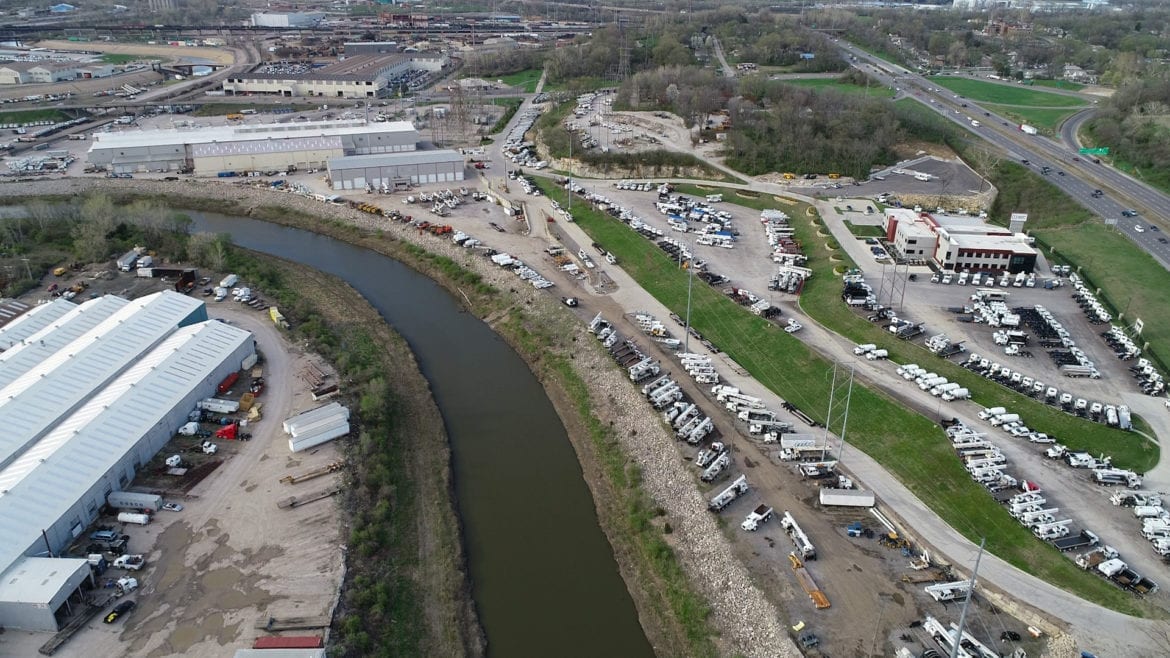 It took a flood at his family’s business – Custom Truck One Source – to lead a frustrated Chris Ross back to his childhood stomping grounds in the Blue Valley neighborhood of Kansas City, Missouri.

Custom Truck’s swamped site was located in the East Bottoms, but Ross knew that city leaders had invested millions in flood control in the industrial area a few miles south, which sits along the Blue River. The area was once home to Armco Steel.

Upon his return in 2005, he looked past the dozens of tires and heaping trash bags littering the sidewalks and hillsides. He wasn’t intimidated by the gritty junkyards, homeless camps, dilapidated houses or lingering crime. Nor was he deterred by the possible environmental headaches he might find; the massive building he had his eye on was a sturdy steel-framed structure.

The 12 Ross siblings had grown up within walking distance from the site. His heart never left. That scouting mission soon turned into something grand for Kansas City as Custom Truck has flourished.

Ross and his family take pride in reinvesting in their old neighborhood. “This is where our heritage is,” he says.

Yet as Ross drives around the site on a sunny spring day, he wonders whether other entrepreneurs would have taken the risk? Why wouldn’t they simply build on a suburban field where incentives are plentiful and politicians are eager to offer more?

Area residents have the same questions and are looking for answers from the next mayor and City Council, who will take their seats after the June 18 general election.

The right leadership could really make a difference for a community that is desperate for rebirth, says Greg Flisram, senior vice president of business and real estate development at the Kansas City Economic Development Council (EDC). “You’ve got to be talking about getting people to work.

“We feel this should be the next thing that the city puts its shoulder into.”

The EDC believes in this area so strongly that it has made it one of its top priorities for business and job growth. The Blue Valley industrial zone has a lot going for it: It is situated at the intersection of two interstate highways, the convergence of several large freight railroads, and is already zoned for heavy industrial use.

“We feel this should be the next thing that the city puts its shoulder into,” Flisram says, adding that brokerage firms are excited about the potential too.

The EDC also envisions a significant amount of public investment, including federal money, to help accelerate development in the Blue Valley industrial area, including millions of dollars of road improvements.

The development agency also suggests a range of tax incentives, including existing programs that provide property tax abatements of as much as 100 percent over 10 years. The EDC also suggests reducing utility taxes as one additional way to help new and growing companies.

But talk of tax breaks for businesses comes as these financial incentives are a hot-button issue in the city and the ongoing campaigns.

Voters will be asked in June to decide on a ballot question that would limit incentives for developers to a 50% abatement of their property taxes. It does allow impoverished neighborhoods to apply for up to 100%, says Jan Parks, spokeswoman for the Coalition for Kansas City Economic Development Reform.

The plan doesn’t offer many exemptions like the city’s current ordinance. But, Parks notes, the Blue Valley neighborhood is an example of where the city could – and should  – offer the full extent of its aid.

Parks argues that many tax incentives are approved west of Troost Avenue for glitzy projects pushed by savvy developers with high-dollar attorneys. Parks’ group is using this campaign season as a way to continue its “TIF 101” presentations to neighborhood groups, which aim to educate small-business owners about these tax incentive programs.

Custom Truck had overall revenue of about $850 million last year and is expected to hit $1 billion by year’s end. The business – which equips truck fleets with custom booms, cranes, mixers and more for businesses across the country – remains in full expansion mode with the help of equity firm Blackstone Group LP, which now owns 70 percent of the business.

Custom Truck, with Chris Ross’ brother Fred leading the charge as CEO, has quietly invested $40 million into the site and the business. They’ve renovated more unused buildings, employed 550 people in Kansas City, and about double that across the country.

The Ross family has done it with business acumen — and some assistance from the city.

For his part, Chris Ross found out about one of the property tax abatements when a contractor came out to work on the building. He applied and ended up saving his company roughly $50,000 annually for 25 years, he says. It offset an employee’s salary during the Great Recession.

“Any little bit helps; it really does,” Ross says.

Ross believes the city should do a better job of holding people accountable for the tax breaks. He promised to reinvest the money and add 50 employees. He kept that promise and then some. Ross hopes others do the same to benefit everyone.

Yet Ross and other business owners in the Blue Valley region understand that incentives are hardly the panacea.

“Incentives alone aren’t going to fix the problem,” Flisram says. “That’s why it has to be a multi-prong attack.”

Area business leaders wish the city would get back to the basics – clean up the blight and illegal dumping, curb panhandling and enforce code violations. One advocate described the area as post-apocalyptic. It’s hard to get multimillion-dollar investors to see beyond the graffiti.

“We need the infrastructure in the area to be cleaned up. More than anything I just want to be an advocate to get more people to invest in the area and get it cleaned up,” says Steve Ornduff, executive director at Moly-Cop USA, which manufactures and supplies equipment to mining operations.

The EDC has already started work on a plan, which goes way beyond road improvements, that helps level the playing field in Blue Valley with the suburbs. It blends innovative ideas with good old fashioned, boots-on-the-ground hard work.

For instance, the agency has begun resolving title problems on abandoned property and accumulating smaller tracts into bigger parcels as land becomes available. No company is willing to spend five to 10 years assembling and buying tracts of land for their site, Flisram points out. It will be up to the city to do that sort of grunt work. That effort has already started, he says, with $250,000 of seed money.

The EDC is also implementing a plan to redirect local earnings tax to companies willing to hire and pay targeted employee groups – ex-offenders and the long-term unemployed – at least $15 an hour. The group is also working to rebrand the entire area. It includes better upkeep and more green amenities along the Blue River.

At some point, Flisram also thinks businesses there would benefit from establishing a single liaison to work with the city to address issues like illegal dumping, security and beautification.

Regaining its financial footing will hardly be easy. Some environmental cleanup work needs to be done after years of steel, auto and other manufacturing in the region. But Flisram and the Blue Valley Industrial Association leaders agree that the cleanup work is hardly insurmountable.

Blue Valley’s location provides more than just proximity to transportation options. The area is also home to a largely untapped labor force, something that sets it apart from suburban warehouse and light manufacturing jobs.

Not every unemployed Blue Valley resident has the training to work in the industrial operations there now, but the EDC has made job training part of its mission to help the region. That’s key for places like Custom Truck and Moly-Cop and several other businesses that offer well-paying trade jobs.

“We have some civic responsibility as well,” Ross says, noting that Custom Truck is working with local vo-tech schools and recruiting within the community. Other companies need hard-working employees too.

Ornduff worked at Armco out of college, and he also feels a pull to restore the region.

He knows there will never be another place like Armco Steel, which employed 5,000 employees – many of whom lived in his Blue Valley neighborhood – and often had an additional 1,000-plus on call to keep the manufacturing lines moving. But his international work with Moly-Cop has also taught him that regions like Blue Valley, with the tax incentives, zoning, rail and interstate access are difficult, if not impossible, to find.

Chris Ross, too, feels a deep connection. The family drove past the Armco plant and industrial area on their way to the ballfields. He vividly remembers touring the plant in 1976 on a school field trip. He left that day with a bolt just like every other kid his age. When the plant closed it devastated the neighborhood. Housing prices have since plummeted while crime increased.

Flisram isn’t fooling himself. There’s no panacea to fix the all the societal woes in the Blue Valley neighborhood. But, he believes, it’s time for Kansas City to reinvest in Blue Valley and create a culture shift.

Leaders with the resolve to slowly work on this problem won’t see instant gratification. But they will lift an industrial zone and the surrounding neighborhood in desperate need of a lifeline.

“It’s not a silver bullet,” Flisram says. “But one way of getting people back connected to work is putting jobs where jobs used to be.”

Tags: economy • Who Will Lead KC?