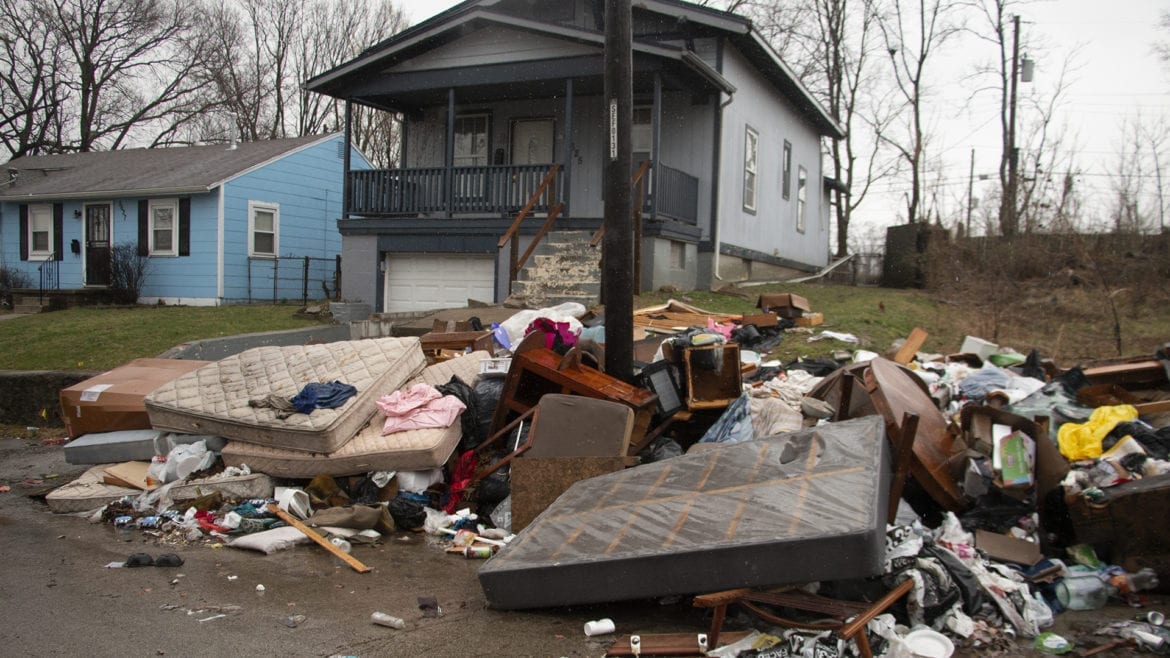 This illegal dumping site, in the 5600 block of Paloma Avenue in Kansas City, Missouri, remained even after a large-scale neighborhood cleanup on March 30, 2019. (Mike Sherry | Flatland)
Share this story

Ellen Boyd, a resident of Kansas City, Missouri’s, Historic Northeast area, isn’t surrounded by vacant homes. But she has counted nearly two dozen of them in a nine-block stretch along the route to 27th Street and Indiana Avenue, where her son’s father lives.

And there’s no question in her mind about what the city should do about these trashy lots and boarded-up buildings.

“They need to be brought down to the bones,” she said. “Who wants to buy one of those houses and fix it up when there are others around it where there is meth or squatters? Who wants to live on a road in the middle of that?”

A few years back, the city tried to eliminate some of the blighted housing by offering it up to intrepid remodelers for a buck. The program had limited success, and Boyd could understand why not everyone would want to purchase a vacant home surrounded by other hovels. She can’t understand how it can be less expensive for the city to keep selling homes that end up abandoned and need maintenance later — when buyers don’t follow through on renovations.

The fact that the blight is visible from Interstate 70 probably makes it even less appealing for homebuyers and developers, she said. She advocated clearing the homes, cleaning the lots and attempting to get the private sector to rebuild.

“Then, when they build it up, there won’t be anything around it that makes the area look bad,” she said. “They keep trying to plant seeds in stuff that isn’t going to take.”

As part of its coverage of this year’s city elections, Flatland put out a call to residents through curiousKC to see what questions they had for the mayoral candidates. Boyd asked, “How do they plan to rid KC of vacant homes, overgrown landscape and trash?”

We put that question to the two general election candidates. Here’s what they said:

Lucas said one way to deal with the issue is to make sure the homes don’t become vacant in the first place. The city currently assists homeowners with minor home repairs – providing $1,000 to $2,000 in assistance. What he would like to see is an increase in these amounts so homeowners can perform major repairs, up to $25,000, to avoid abandonment.

“I would like to create more funding for homeowners which allows people to age in place and allows the neighborhoods to stay secure,” he said.

And he is a proponent of renovation. The city found millions of dollars for demolition, but he advocates rehabbing and selling the homes. He also thinks money would be well spent by providing gap funding for people to make down payments on some of those vacant homes.

Finally, cleaning weeds and trash off the lots would be easier if the city had a better way to transfer properties from the Land Bank. Instead of speculators coming in and buying land, he prefers it go to homebuyers, or even neighbors, who want to fix up the lots.

“We need to work with Jackson County, state legislators and others to make sure we have laws that more easily transfer those properties,” he said.

Justus’ ideas on vacant housing comes from her time doing pro bono legal work for the past couple of decades. She thinks rehabilitation is the way to go; there just needs to be a lot more of what the city is already doing.

Getting clear titles on these properties is the first hurdle. After that, it’s finding money for rehabilitation.

“A lot of them are just hung up: literally abandoned,” she said. “Someone walks away from it or died and didn’t take care of probate.”

To clear the titles, the city has to go through legal battles, which takes “an army of volunteer lawyers.” Once the titles are cleared, the city works with nonprofits like Habitat for Humanity to rehab and sell the places.

Her law firm, Shook, Hardy & Bacon LLP, teamed up with Legal Aid of Western Missouri to represent Ruskin Heights, and they are in court on a regular basis clearing titles so the homes association can start doing rehab work. The Lykins neighborhood (between Benton Boulevard and Hardesty Avenue just north of I-70), she said, is another example where neighbors are going block to block dealing with the issue.

“When you have neighborhood participants and free lawyers doing the hard legal work, it makes a difference,” she said.

And rehabbing homes in the urban core is also a solution to another of the city’s predicaments.

“It will be the quickest path to fixing the affordable housing crisis,” she said. “There’s no problem attracting residents to these neighborhoods. There would be a waiting list if we could scale our efforts up and increase availability of the existing vacant properties.