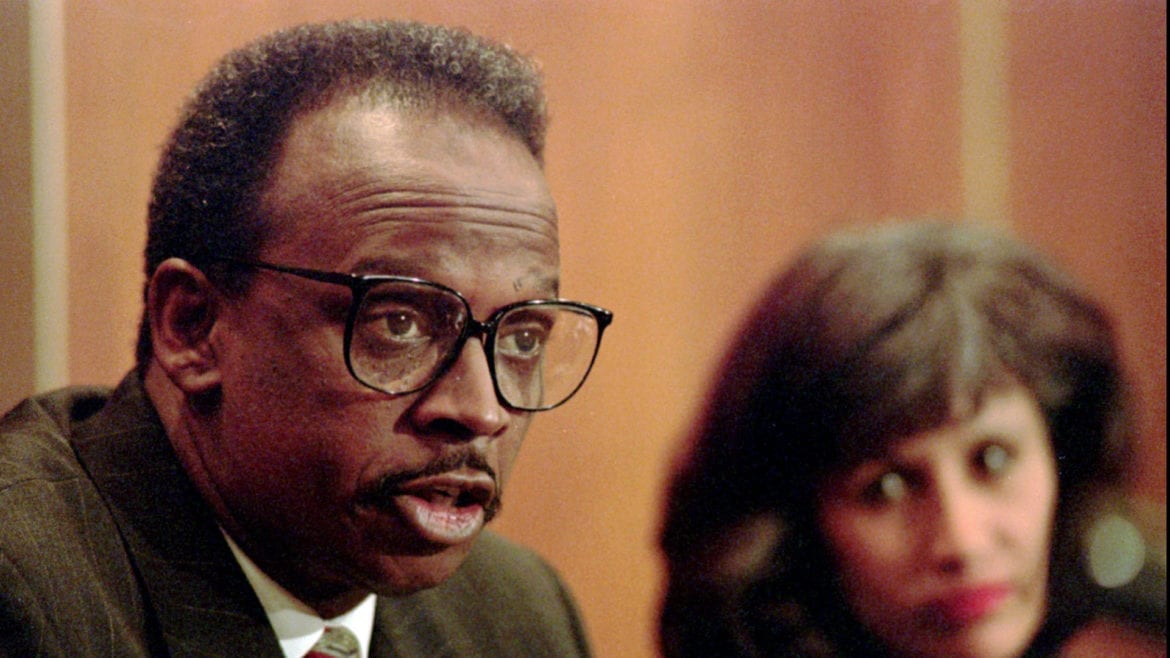 A curiousKC question hearkened back to the school desegregation case in Kansas City, Missouri. In this file photo from March 25, 1997, School Board President Edward Newsome discusses a federal court ruling in the case as school board member Sandy Aguirre Mayer looks on. (Ed Zurga | Associated Press)
Share this story

Earl Fleer is nearly 80 years old now, and he lives about a dozen miles south of his hometown of Hermann, Missouri.

But some months back, when he came across an online prompt for our curiousKC reporting initiative, his mind drifted back to his days as a public information officer in the mid-1970s for the Kansas City, Missouri, school district, which is now known as Kansas City Public Schools (KCPS).

Fleer came to the district after the superintendent recruited him away from his broadcast news reporting job here in town.

One of his roles at the school district was to help do research during the early stages of the historic desegregation case that ran from 1977 until 2003. One of the key flashpoints leading up to that court battle was the refusal of the majority-white voters to approve a tax increase for what was becoming an increasingly minority student population.

Fleer remembered that a common refrain among some voters during his time at the district was that, if the district needed more money, it should raise it from businesses in what these critics perceived to be a very property-rich district.

The one thing that naysayers missed, Fleer said, was that some of the property within the district was tax-exempt, such as churches, cemeteries and the like. He remembered the district at one point got an inventory from the Jackson County Assessor’s Office that listed just how much untaxed property there was in the district.

So, when he saw that curiousKC prompt, this question popped into his head: “(What is) the amount of untaxed real estate property in the KC Public School District. If taxed, how would the district benefit?”

Well, that was not as straightforward a question as one might think. In fact, Flatland went back and forth with Jackson County officials for months trying to find that answer.

And then, on May 15, we got our answer. In an email, the county said the value of untaxed property within the Kansas City school district is nearly $1.5 million. But only a certain percentage of that would come to the district based on tax rates.

The total assessed value of all property within the district is approximately $3.2 billion, according to the Missouri Department of Elementary and Secondary Education. That figure represents about one-third of the more than $10 billion in assessed value within the dozen school districts in Jackson County.

A different tax issue dogs the district today — the question of how much money is diverted from its coffers to property developers through tax abatements.

This is a front-burner question for city leaders now and a hot topic in the mayoral and City Council races that will be decided on June 18. That ballot also includes a measure that would allow abatement of no more than 50% of a project’s property taxes.

Developers often argue that these tax incentives are worth it because they help projects that end up generating additional tax revenue for the district and other public institutions, such as the Kansas City Public Library, that rely on property tax revenue.

The current debate is a little different than the one Fleer recalled, but the second part of his question remains relevant today: What would the district do with the money it loses through tax abatements?

First off, Linda Quinley, chief financial and operations officer for KCPS, said that the district loses an estimated $29 million a year to abated taxes, which would boost its annual property tax revenue by nearly 25%. The district has an operating budget of about $230 million.

Quinley said the district is good at “adapting to the revenue stream they have and making it work.” But the district does have a wish list of things it would put extra money toward.

One example is a welcome center for the growing number of non-English-speaking, immigrant students coming into the district, she said.

The district would also like to integrate special education students into regular classrooms more than it currently does, which would mean hiring more special education teachers. And KCPS would like to bump up its career- and technical-education offerings for non-college-bound students.

Building upgrades aren’t on the list because money for capital projects typically comes from bonds. But the district is shy there, too.

The city’s voters haven’t passed a general obligation bond since the late 1960s, Quinley said. Then, in the mid-1980s, the district received money from the federal desegregation settlement. Much of that was designated for facilities. The problem now is, there are 20-year-old pools and other structures with no funding for improvements.

KCPS has taken steps to increase its income. It joined with other districts in Jackson County to hire a firm that helped Jackson County update is property assessments. (The county was lagging because of state legislation that capped fees counties could charge for taxes. This, in turn, reduced the number of assessors they could hire, Quinley said.)

The county expected assessed valuations to increase a bit this spring. Quinley hoped to see new funds coming in from the higher property values. But it’s unfortunate, she said, that tax abatements (which can be good for the local economy) put more pressure on residents and businesses that do have to pay taxes.

As for Fleer, along with the desegregation case, he also worked on another project at the school district that had a profound impact on the city (and which is near and dear to our hearts).

He helped transition the local public television station from the district to the community-licensed operation that continues to operate today as Kansas City PBS. His job was to dispose of the old equipment that the new station did not need as it debuted with color television.

As time wore on, and as the desegregation case heated up, Fleer said the district phased out his job in favor of an outside public relations firm.

He left the district in 1978 to resume his radio broadcasting career, eventually returned to Kansas City to work in cable television, and finally retired in 1991.

“It was an interesting ride,” Fleer said, “and I wish the school district the best of luck.”


—Tammy Worth is a freelance journalist based in Blue Springs, Missouri.

Tags: curiousKC • Who Will Lead KC?