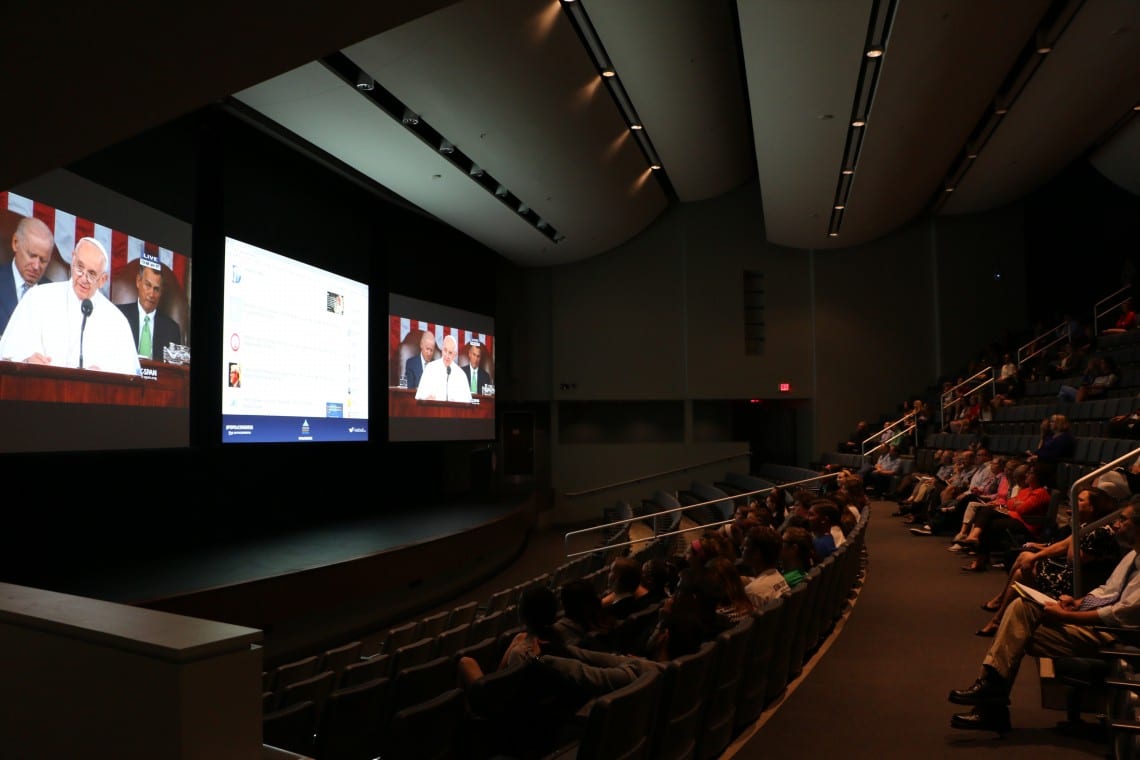 The "Pope 2 Congress" watch party at Rockhurst University drew applause from the crowd on several occasions throughout his speech. (Photo: Daniel Boothe | Flatland)
Share this story

Pope Francis’ speech to Congress Thursday morning — where he stressed the need to bridge the political divide — might as well have been directed at Kansas City lawmakers, said the Rev. Mark Lewis, director of the Thomas More Center for the Study of Catholic Thought and Culture at Rockhurst University in Kansas City.

“Kansas City is struggling with some very important issues, and it divides us,” he said. “For Kansas City, that’s the challenge. How do we listen to people who don’t agree with us? If that is what we can learn to do, I think the pope’s visit will have accomplished a lot.”

Addressing the joint session of Congress, Pope Francis challenged the lawmakers and the rest of the country to foster in a spirit of cooperation and to “grow as a nation” by working together across party lines for the greater good.

“At their best, both parties and politicians want to do what is best for the people,” Lewis said. “This is a city and an area of the country that has people who are struggling, are hurting, so we need to make sure the poor and the most vulnerable in our midst are cared for, and that should resonate in both parties.”

Rockhurst hosted a “Pope 2 Congress” watch party, as students, faculty, and members of the Catholic community gathered in the Arrupe Hall Auditorium to hear the first-ever papal address to Congress.

In addressing Congress, the pope said:

“Politics is an expression of our compelling need to live as one, in order to build as one the greatest common good: that of a community which sacrifices particular interests in order to share, in justice and peace, its goods, its interests, its social life. I do not underestimate the difficulty that this involves, but I encourage you in this effort.”

That struck a chord with Lewis.

“I think the challenge is, and I think it is what the pope was trying to say to Congress as well is, how do we dialogue?” he said. “Because I think we are in an age of very strong ideals and ideas, so pragmatism has moved away in favor of ‘I have to hold this position at any cost.’ I think that invitation to dialogue truly means that we have to be able to listen to each other.” Rev. Mark Lewis Ph.D, is the Director of the Thomas More Center for the Study of Catholic Thought & Culture and a Jesuit priest. (Photo: Daniel Boothe | Flatland)

The pope has supporters and critics on both sides of the political spectrum. While his stance on issues like abortion, marriage equality, and euthanasia align with conservatives, he has been outspoken on more traditionally liberal issues like wage disparity and the contributions that consumerism has had on global warming.

Rockhurst is a Jesuit university, and the pope is a member of that religious order as well.

Unlike priests, jesuits do not report to a particular archdiocese or bishop. Founded by St. Ignatius Loyola in the 16th century, the Jesuits are “committed to the service of faith and the promotion of justice.”  Upon being ordained, Jesuits take solemn vows of obedience, chastity, and poverty.

In keeping to those vows, Pope Francis has refused to wear the traditional Papal robes adorned with fur or custom made red shoes as did his predecessor, Pope Emeritus Benedict. His papal ring is made of plain silver as opposed to traditional gold, and when appointed to the highest position in the Catholic church, he elected to live in a small room in the Vatican hotel, passing on the 12 plus-room papal apartment on the top floor of the Apostolic Palace. He is the first Jesuit priest ever elected to the papacy.