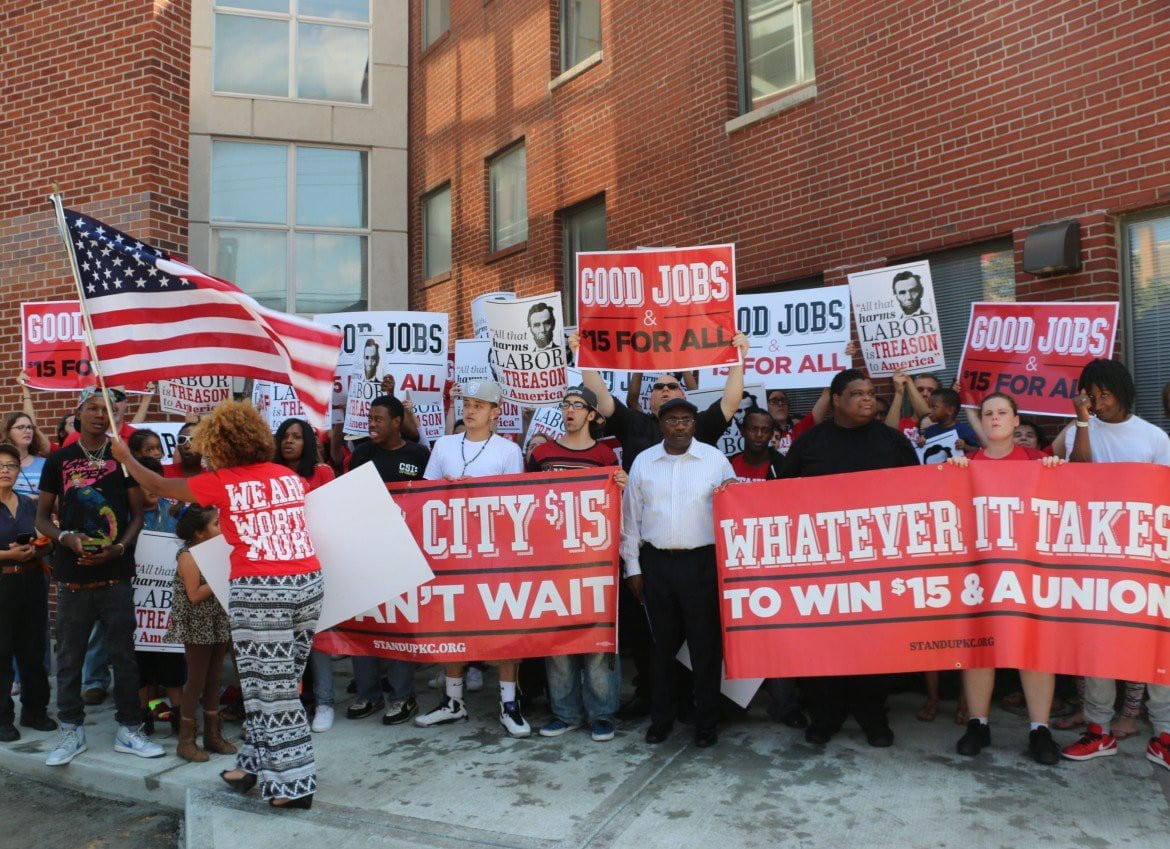 Rev. Rodney Williams, center, and those protesting the current minimum wage, block the entrance to the building that occupies the KC Restaurant Association. (Photo: Daniel Boothe | Flatland)
Share this story

As it turns out, for Kansas City minimum-wage activists, the city’s proposed $13 an hour increase is not enough.

Singing “Hey Hey, Ho Ho, these poverty wages have got to go,” a group of about 50 protesters briefly rallied outside the building that houses the Kansas City Restaurant Association in downtown Westport Thursday afternoon, calling for a minimum-wage increase of “no less than” $15 an hour.

“We are standing here today in front of the restaurant association in a state of jubilation and disappointment,” said Rev. Rodney Williams, pastor of Swope Parkway Christian Church.

“We celebrate the victories of fellow workers in Seattle, San Francisco, and Los Angeles, and soon to be New York. But we are still disappointed that Kansas City still lags behind,” he said.

Williams was referencing New York Governor Andrew Cuomo, who at the same time Thursday was joined by Vice President Joe Biden in New York City to officially announce his support for a statewide $15 an hour minimum wage.

“Every man and woman deserves $15 as a minimum wage, and we’re not going to stop until we get it done,”  Cuomo told the crowd in Manhattan.

In Kansas City’s Westport, the protest was partially an attempt to piggyback off Cuomo and the national attention the Fight for 15 movement has generated.

Seattle, San Francisco and Los Angeles recently have raised their minimum wage to $15 an hour.

Mayor Sly James and the city council of Kansas City voted in July to raise the minimum wage to $13 an hour by 2020 in annual increments. The first increment was scheduled for this past August.

However, a group of restaurant owners started a petition in July to try and overturn the new law. They successfully collected enough signatures to pass a referendum and halt the minimum-wage increase for the time being. The City council members, who already voted 12-1 in favor of the increase, are now forced to reexamine the issue. The council is scheduled to vote on the referendum September 16th.

“The workers of this city, the mayor of this city, and the city council won a raise for thousands of workers … But politics and industry special-interest groups are challenging the victory,” he said.

“And we are here to not only challenge them back, but to say that low-wage workers in this city and across America are in need of a minimum of $15 dollars an hour.”

The Kansas City Restaurant Association declined to comment. The employees at their offices at 4049 Pennsylvania turned off the lights, locked up the office entrance, and exited out a back door as protesters marched towards the building.

KCPT and the Hale Center for Journalism present “Getting By,” a series of stories and discussions examining the impact of inequality in KC, at kcpt.org/gettingby.