A challenge, from TEDxKC Speaker Martin Pistorius: Expand your possibility 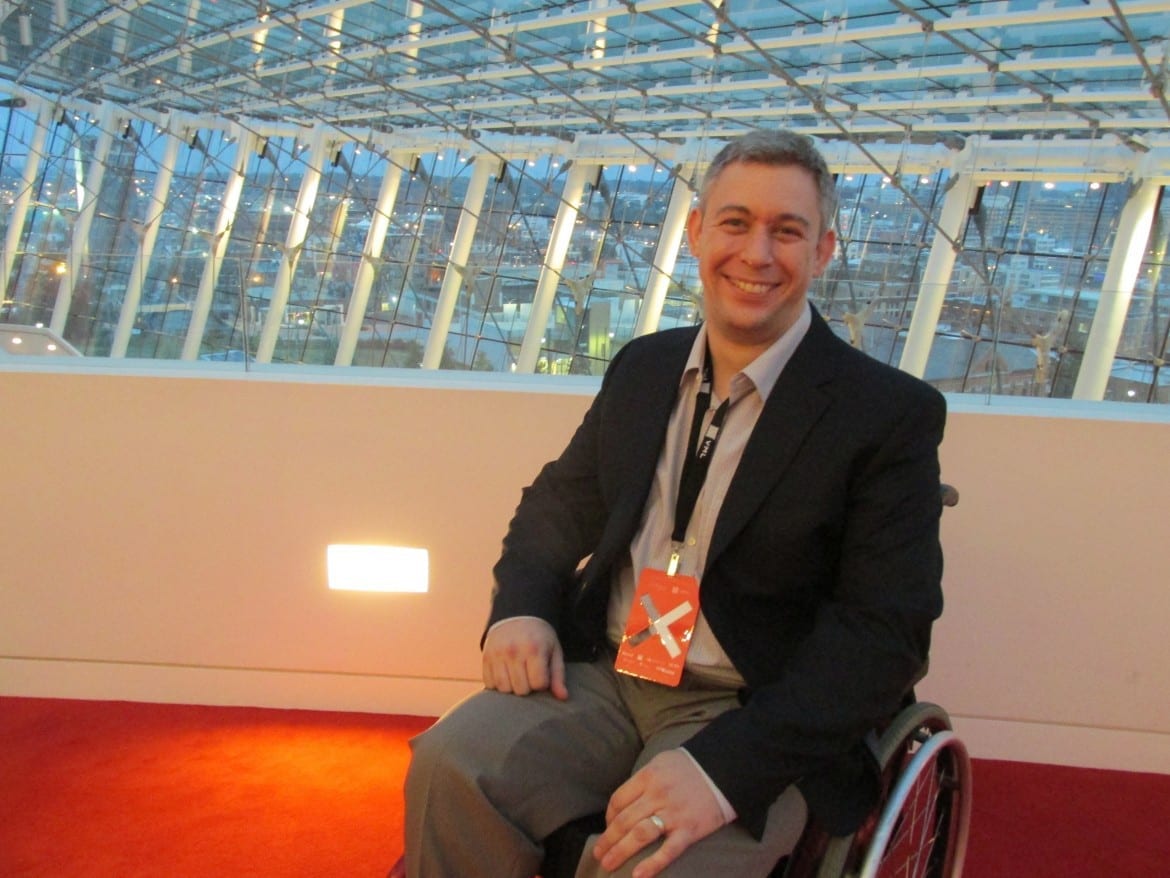 “I think my biggest hope with sharing my story is that it could maybe help others and make a difference,” Martin Pistorius told Flatland writer Jesus Gomez-Lopez before his presentation at TEDxKC. (Photo: Jesus Gomez-Lopez)
Share this story

There’s a long list of things TEDxKC speaker Martin Pistorius can’t do, speaking and walking being one of them.

There’s another list, a list that rivals the first one in length. That is the list of things he can do: run a business, express himself expertly, engage and command a room like he did at TEDxKC, in front of a sold-out crowd at the Kauffman Center for the Performing Arts Saturday night.

“Yeah, I just got my license, which was great,” he said, via keyboard, on Friday at a cocktail and mingling party the night before TEDx. The words flashed across an iPad connected to a keyboard, which rested on his lap.

The wheelchair-bound author, who is known for his warm demeanor and the open manner of an old friend, was regularly interrupted by new contacts, including fellow TEDx speakers like renowned humanitarian and innovative disaster zone worker Dara Dotz. She greeted him warmly. Pistorius passed along words of confidence before bidding her goodnight.

Back to learning how to drive.

“I remember the first time I started learning to drive,” he said. “I was really nervous and thinking, ‘I am in control of something that could actually kill someone,’” he typed with a mischievous grin.

The dark joke won him a laugh from the HarperCollins staffer who joined him at the event. The publisher sells Pistorius’ book “Ghost Boy,” the novel in which he details his illness and his life during and after it.

Pistorius has a modified car with an accelerator and brake combined on a lever, and a regular steering wheel.

As buoyant as his manner is, Pistorius doesn’t look like someone who spent most of his formative years with a debilitating illness, someone who for years coped with the inability even to express his most basic needs.

The night after our interview, Pistorius took the TEDxKC stage, to tell the heartbreaking story of a day when his mother came into his room and expressed her wish that he would die.

“I think my biggest hope with sharing my story is that it could maybe help others and make a difference,” Pistorius said Friday night.

One of the broader themes of his story is a redress of the biases adversely applied to people with disabilities. Pistorius said he wants to help create a more inclusive world in which all individuals are invited to participate.

“It’s not the wheelchair that makes me disabled; it’s the stairs,” he said.

“I think, and this was also part of the reason I wanted to share my story, because I feel despite having a disability you can still have a rich and fulfilling life,” he wrote. “It’s not always easy, but then again whose life is?”

He said the reaction his story gets was completely unexpected.

“I mean, when you write a book, you always have these dreams of being on the “New York Times” bestseller list, but you never actually think it will happen.”

Pistorius said he was an established fan of the TED lecture series when he was approached to give a speech.

As someone with a disability, Pistorius has taught himself web development and landed a job there at a company he created. He’s also become a successful novelist and survived prodigiously adverse circumstances with a full spirit. Now, he said he wants to enjoy what he’s worked for.

“I think a lot of my focus is on just really enjoying life. I have been through so much that I appreciate what I have now compared to what my life used to be,” he said.

Today, Pistorius lives with his wife in England, just outside London. He started his own web development firm.

In literary terms, his story falls in to the romance genre, a tale that starts in a dark place and comes together at the end, usually finishing with nuptials.

Pistorius said he shares the narrative as proof that the realm of the possible is wider than assumed.

“I think a lot of my focus is on just really enjoying life. I have been through so much that I appreciate what I have now compared to what my life used to be.”

“I think my story is proof that amazing things can happen,” he typed. “And I don’t mean that in an arrogant way. I mean it in a way of there always being hope and that life can change.”

Saturday’s TEDxKC featured a series of lectures and performances focused on the theme “Breakthrough.” Pistorius addressed how central words and expression have been in enhancing his ability to connect with the world. His speech was delivered through a computer voice, the words entirely his own.

The speech was lively, funny and serious when it needed to be, just like Pistorius himself. It was uniquely moving, one of the few performances that got a standing ovation, even though he never said a word throughout.

One of the few times the audience may have been aware of Pistorius’s apparatus is when he broke the fourth wall and commented on it himself.

“One most difficult obstacle to my way of communicating, is that sometimes I want to shout,” the computer voice said, reading Pistorius’s words while he looked faced the audience, a solitary figure in the TEDx spotlight.

There are things Pistorius can do, and the things he can’t. But the division between the two isn’t very neat sometimes.

“It all sounds the same,” he told the TEDx crowd. “But if you can, please imagine these next few words as warmly as you can.”

Your fave TEDxKC Speakers: Where are they now?