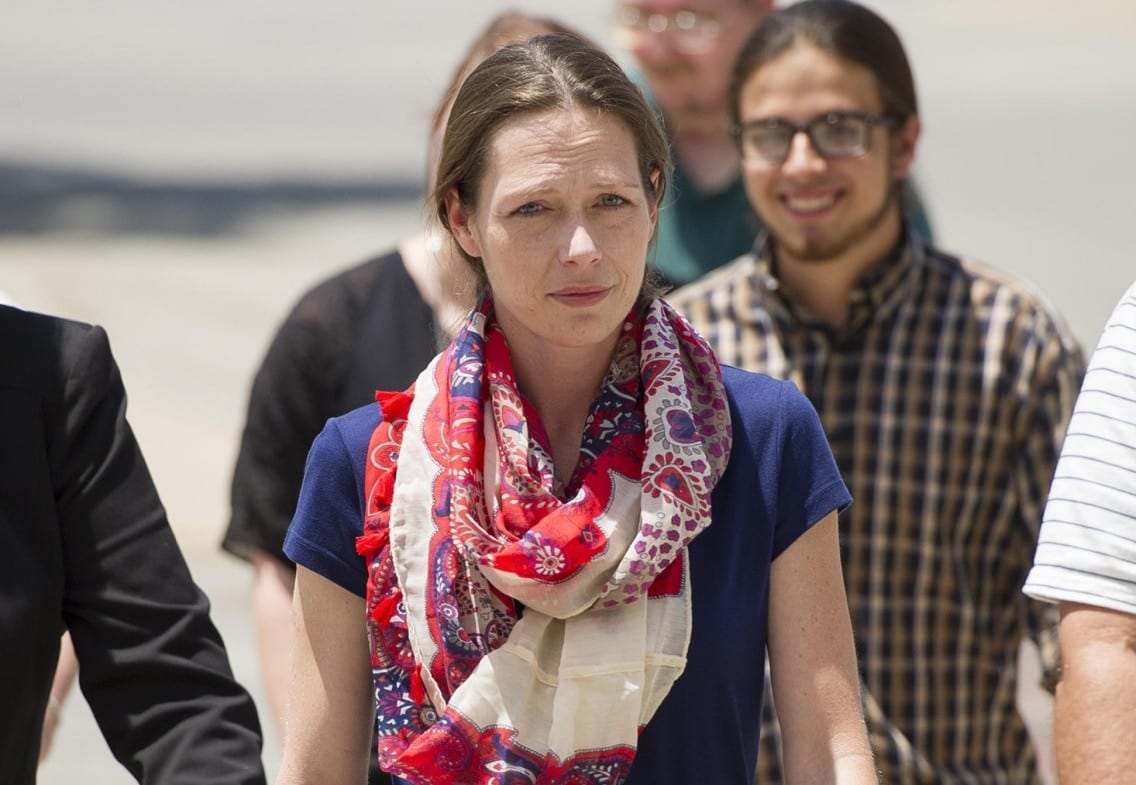 Shona Banda, shown here after she was booked into jail and then released after posting bond in June for drug-related charges, is preparing to sue Kansas Gov. Sam Brownback, the Kansas Department for Children and Families and the Garden City Police Department. (Photo: James Dobson | Garden City Telegram)
Share this story

Lawyers for Garden City resident Shona Banda have prepared a lawsuit against Gov. Sam Brownback and the state agency that has custody of her child, claiming she has a constitutional right to use cannabis to treat her Crohn’s disease.

Banda self-published a book and posted videos online in which she says cannabis is the only treatment able to calm her condition. The national medical marijuana movement has rallied around her since March, when Garden City police came to her home and confiscated her cannabis after her 11-year-old son spoke up about her use of it at a school anti-drug presentation.

The Kansas Department for Children and Families subsequently took custody of Banda’s son, saying the home environment was not safe for him, and the Finney County attorney filed drug-related criminal charges against her.

A draft of the lawsuit to be filed in federal court was posted online last week. It asks for the state to return custody of Banda’s son to her. It also names the Garden City Police Department as a defendant, claiming the search of her home was not constitutional.

Kansas And Missouri Lag In Reducing Numbers of Uninsured

Both Kansas and Missouri are underperforming when it comes to reducing the number of uninsured within their borders.

From 2013 to 2014, all 50 states recorded statistically significant reductions in their uninsured rates, mostly because of the implementation of key provisions of the Affordable Care Act, according to new data from the U.S. Census Bureau. But most states saw bigger reductions than those posted in Kansas and Missouri.

The drop in Missouri’s rate, from 13 percent to 11.7 percent, represents an overall reduction of only 10 percent. That was better than only Alaska’s 7 percent reduction.

Kansas performed better, dropping its rate from 12.3 percent to 10.2 percent, an overall reduction of 17 percent. But it also lagged far behind the best performing states.

Kentucky led the nation, dropping its uninsured rate a whopping 41 percent, followed by West Virginia, 39 percent, and Rhode Island, 36 percent. Oregon and Washington rounded out the top five with reductions of 34 percent each.

All of the top five performing states expanded their Medicaid programs to cover non-disabled adults earning up to 138 percent of the federal poverty level —$16,105 annually for an individual and $32,913 for a family of four. In addition, three of the five — Kentucky, Oregon and Washington — established their own online health insurance marketplaces. Neither Kansas nor Missouri expanded Medicaid or established its own marketplaces.

Registered nurses at 17 HCA-owned hospitals in five states, including two in the Kansas City area, have tentatively approved a new collective bargaining pact covering wages, staffing, scheduling and workplace safety. Nurses at Research Medical Center in Kansas City have ratified the agreement and nurses at Menorah Medical Center in Overland Park are scheduled to vote on it later today.

“It helps for us to continue to recruit good nurses and to retain the nurses that we have,” said Carolyn Lusby, a registered nurse at Menorah. “For us it’s about giving good quality care. We’re doing that now, and the thing we gained in our contract will help us to continue to do that,” she said.

The agreement grants nurses pay hikes of up to 15 percent over three years, enhances enforcement of staffing practices and strengthens grievance procedures, among other measures.

In recent months, nurses at Research and Menorah have protested what they said were unfair work conditions at the hospitals. They complained the hospitals had failed to comply with their own staffing plans and paid wages below the national average. The nurses were represented by National Nurses United, which claims to be the largest organization of RNs in the country with 185,000 members.

The scheduled closure of the only hospital in the southeast Kansas community of Independence could create new urgency around the Medicaid expansion debate.

Advocates of expanding the Kansas Medicaid program — known as KanCare — say the additional federal money it would generate would help stabilize a growing number of struggling hospitals in the state and might have helped save Mercy Hospital Independence. They point to estimates produced by the Kansas Hospital Association that showed expansion would have generated an additional $1.6 million in annual revenue for Mercy.

Rep. Jim Kelly, a Republican from Independence and chairman of Mercy’s board, said he hopes the scheduled Oct. 10 closure of the hospital will spur a more serious discussion about expansion in the 2016 legislative session.

“For me and for some others, particularly in this section of the state, this will be kind of a poster that we can carry forward and say, ‘This is happening, and it’s going to spread if we don’t come up with a way to deal with health care in rural Kansas,’” Kelly said.

An informal coalition of Kansas mental health advocates is close to proposing legislation that could prevent hundreds of people with serious mental illnesses from ending up in jails, emergency rooms, or a state-run hospital.

“This has the potential to be one of those win-win-win situations that, frankly, in my 38-year career I can honestly say doesn’t come along very often,” said Bill Rein, commissioner of behavioral health services at the Kansas Department for Aging and Disability Services.

The proposal would let Kansas communities open secure “receiving centers” that would be allowed to hold people who appear to be seriously mentally ill and in crisis for up to 72 hours. These admissions would be involuntary, and patients would not be allowed to leave early unless they are assessed as unlikely to harm themselves or others.

Under current law, involuntary patients cannot be held for more than 24 hours — 48 hours on a weekend — without first being taken to court and having a judge decide whether they pose a danger to themselves or others. Oftentimes, the patients remain in jail or are taken to the state hospitals in Larned or Osawatomie because they are in crisis, uncooperative and have nowhere else to go.

— Dave Ranney is a reporter for KHI News Service in Topeka, a partner in the Heartland Health Monitor team.

How Delta-8 THC is Shaking Up the KC Cannabis Industry