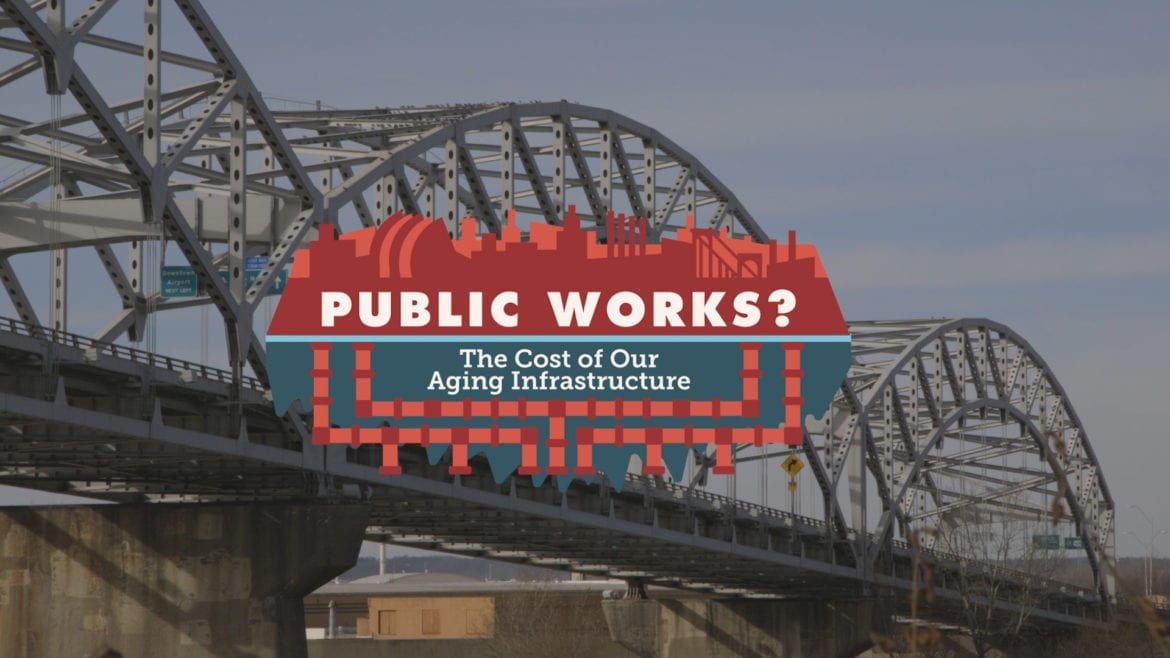 Watch as we tag along with an inspector at the Buck O'Neil Bridge in Kansas City. Formerly the Broadway Bridge, this structure is considered deficient by the Federal Highway Administration. (Video: John McGrath | Flatland)
Share this story

When it comes to the sorry state of Kansas City bridges, City Manager Troy Schulte says the one that keeps him up at night is the old Broadway Bridge over the Missouri River.

But a Flatland analysis of bridge inspection data reveals that there are enough problem bridges in the metropolitan area to keep Schulte and other area officials up at night for most of the year.

In fact, the National Bridge Inventory database shows that the Broadway Bridge, which has been renamed the Buck O’Neil Bridge, is just one of 246 bridges in the eight-county area that are considered “structurally deficient.”

The designation does not mean those bridges are about to collapse, said Brian Kidwell, assistant district engineer in Kansas City for the Missouri Department of Transportation.

It simply means those bridges will soon be costing taxpayers money because they need significant maintenance, major rehabilitation or, eventually, replacement. In fact, many bridges on the deficient list are not too concerning, Missouri and Kansas officials said, because they are structurally sound and will be closely monitored.

But it’s only prudent to note that the same rating was given to a Minneapolis bridge that is no longer in the database. That’s because it fell into the Mississippi River in 2007, killing 13 people and injuring 145.

That bridge on Interstate 35, which had been scheduled for replacement in 2020, was later found to have had a critical design flaw.

The 246 area bridges considered structurally deficient, according to the Federal Highway Administration’s 2016 data, are spread throughout Platte, Clay, Jackson and Cass counties in Missouri, and Leavenworth, Wyandotte, Johnson and Miami counties in Kansas.

The majority of them are in Missouri. The oldest were built in 1900, mostly in Cass County in Missouri and Miami County, Kansas. The newest of those deficient bridges has been around only since 2003.

Average daily traffic over those bridges varies greatly. The most heavily traveled, an Interstate 29 bridge over Route AA near Houston Lake in Platte County, sees more than 88,000 vehicles every day, while a Leavenworth County bridge that carries 11th Street over Three Mile Creek has almost no daily traffic.

Kidwell said that, given the scarce resources available, the best MoDOT can do is prioritize those bridges that are in the worst shape and that carry the most traffic. Age itself is not a prime indicator of the condition of a bridge, he added, noting that traffic loads and the spreading of salt during winter are prime reasons for bridge deterioration.

One example of what heavy loads can do to a bridge, he said, is the Grand Boulevard Bridge over Interstate 670 in downtown Kansas City, which had to be replaced last year at a cost of $3.5 million.

It began to fail in May, on the same day Kansas City inaugurated its $100 million 2.2-mile light rail system running from the City Market to Union Station.

That bridge failed in a way no one expected, and it was not on anyone’s radar, Kidwell said. “My suspicion is that something very heavy went across it at some point and accelerated the structural problems.”

In its most recent report card on America’s infrastructure, released March 9, the American Society of Civil Engineers gave the nation an overall score of D+, the same as in its last report four years ago. The report covers roads, bridges, airports and other critical infrastructure.

The engineering society, whose members benefit from infrastructure projects, found decent improvements in some categories.

But the engineers noted that “reversing the trajectory after decades of underinvestment in our infrastructure requires transformative action from Congress, states, infrastructure owners, and the American people.”

The 2017 report card estimates that it will take $4.5 trillion in new investment between now and 2025 to bring current infrastructure to a grade of B, which ASCE considers to be adequate. Money spent on new projects, such as an expansion of light rail systems, would be in addition to that figure.

Kansas and Missouri both got an overall C- on the 2013 ASCE Report Card. State-by-state grades for 2017 won’t be completed until May 2018, according to an ASCE spokesperson.

That’s an improvement over the past decade.

But despite that, ASCE engineers estimate there’s a $123 billion backlog in needed bridge maintenance nationwide. The state of Missouri estimates it would take $50 million alone to refurbish the Buck O’Neil Bridge and its surrounding roadways.

The association also said in its latest report that Missouri scored in the bottom five of all states in the number of structurally deficient bridges, with 3,195. Updated 2017 bridge scores for Kansas and Missouri also will be released next year.

Other poorly performing states include Iowa, with nearly 5,000 structurally deficient bridges, and Pennsylvania, with 4,500.

Only 60 of those 246 problem bridges are located in the four Kansas counties of the metropolitan area, according to new data provided by the Kansas Department of Transportation, but not yet reported to federal officials, a spokesperson there said.

On the Missouri side, the numbers are more troubling but not surprising.

MoDOT engineer Kidwell notes that the state has the seventh-largest road and bridge system in the nation and the fourth-lowest funding per mile.

That places Missouri in the bottom five of all states and territories in the number of structurally deficient bridges.

“I think we can tread water given current funding,” Kidwell said. Right now we are keeping up, he added, even as MoDot is seeing bridges quickly deteriorate.

What that means for the traveling public, he said, is that available funding will have to be spent on keeping infrastructure safe with fewer dollars spent building a wider, smoother, more efficient transportation system.

“Something is going to have to give with the voting public and elected officials,” he said. “What do you want, and what are you willing to pay for?”

— For more on the current state of the metro’s infrastructure, follow our series, Public Works? The Cost of Our Aging Infrastructure and online with #KCPublicWorks.

Respond to Our Story

Crunching the Numbers Behind the Pothole Plague