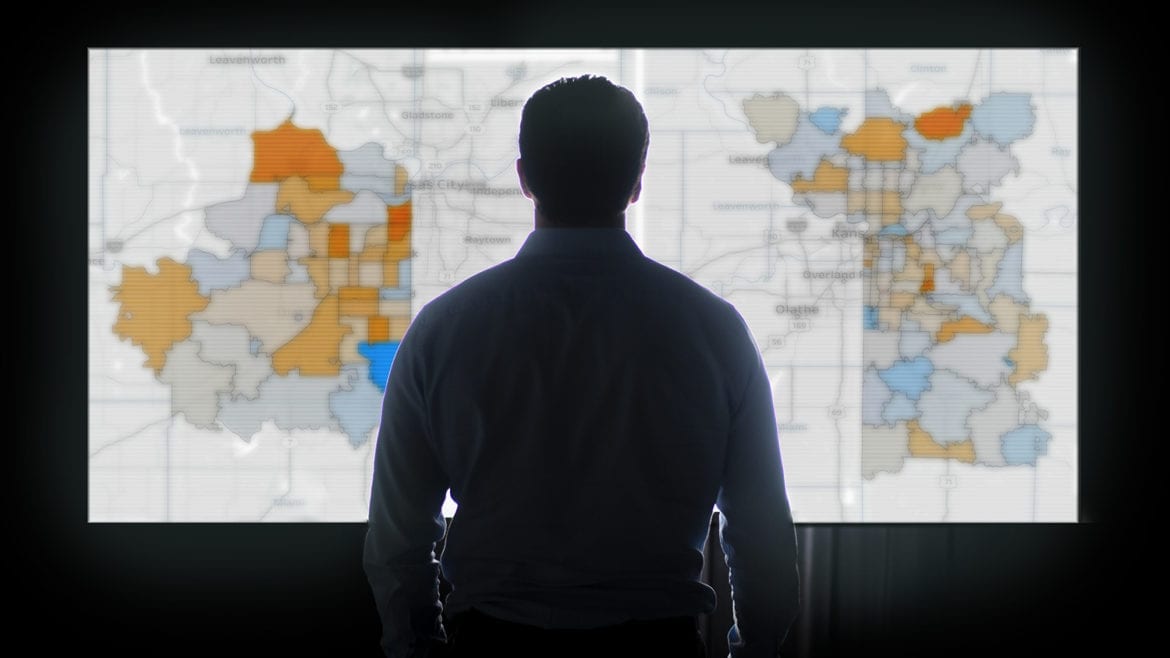 44 days. That’s how long it took our research intern to obtain all the eviction information for Wyandotte County.

Across that month and a half, Flatland’s Ryan Hennessy spent about six hours a day combing eviction records the only place they were available: on one of three public computers on the first floor of the Wyandotte County Courthouse.

By Day 22, he was having second thoughts. He didn’t quit, though, and in the end combed through 4,519 individual eviction cases spanning the past two years in Wyandotte County.

Before this, an analysis of evictions on both sides of the state line had never been published.

See How We Put the Data to Use

Changed Locks: Getting Evicted in WyandotteIt takes two minutes for the woman in the wheelchair to roll in front of Judge R. Wayne Lawson. It only takes another two minutes for her to be legally evicted. “You have to leave, just not today,” Lawson tells…

Wyandotte was a different story. The open records request received a curt denial letter from the Kansas Supreme Court, citing a 2005 order that prohibited bulk requests. Hennessy then unsuccessfully appealed to the high court in Topeka. The state’s legal attorney even reached out to FullCourt Enterprise, the New Mexico-based case management system used to maintain the state’s record system, to see if it could help out Hennessy’s research. No dice.

So to the courthouse he went, the only place to access the information. There, Hennessy got into a routine. Belt off to go through the metal detector. A quick chat with the bailiff about the weather. Set up at one of the early model Dell computers with FullCourt on it, and occasionally steer confused members of the public toward the proper exit door when they came off the elevator. At midday, he ate his brown bag lunch.

Hennessy had been able to obtain a PDF with the case numbers for all evictions in the county for the past two years. He turned this into an Excel sheet and typed each case number into the courthouse computer. From there, he was able to see the Record of Actions. He’d first read the landlord’s petition, the official notice given to the tenant of impending eviction.

Most eviction cases involved money, and the amount claimed is found here. Outside of dollar figures, a landlord can cite poor behavior, like the case he found where the tenant bit off his girlfriend’s earlobe after she had stabbed him in the wrist.

Then came the subpoena, which let the tenant — now a defendant — know his or her court date. Hennessy would check those two documents against each other to confirm addresses and names, even for a John Doe. The last record was usually a judgment, handwritten by a judge and scanned in to the system, with the outcome of the case. Appeared and confessed, it might say, or Default Judgment.

Hennessy would type all this information into his own computer, tracking names, addresses, amounts each tenant owed and outcomes. He occasionally doubled back to spot-check his work.

The last step, before moving on to the next court case, was to check for an order of garnishment. While rare, Hennessy said one of the more unusual orders he found was to garnish a tenant’s wages for $9 after he was evicted.

This data — all 4,519 pieces — have been used throughout this month’s cover story and will be used in future ones. It allowed us the analyses of where these evictions are happening in the county, for how much money owed, and the average time to be legally evicted (roughly a month and change).

When asked if he’d do it again, Hennessy didn’t hesitate. Of course, he said. When he got really frustrated with the system, he’d remember it was for everyone. We’re bigger than one county, he pointed out, and we need the view from the other side.