You Asked, It Became Part of a National Controversy, and We Made a Map 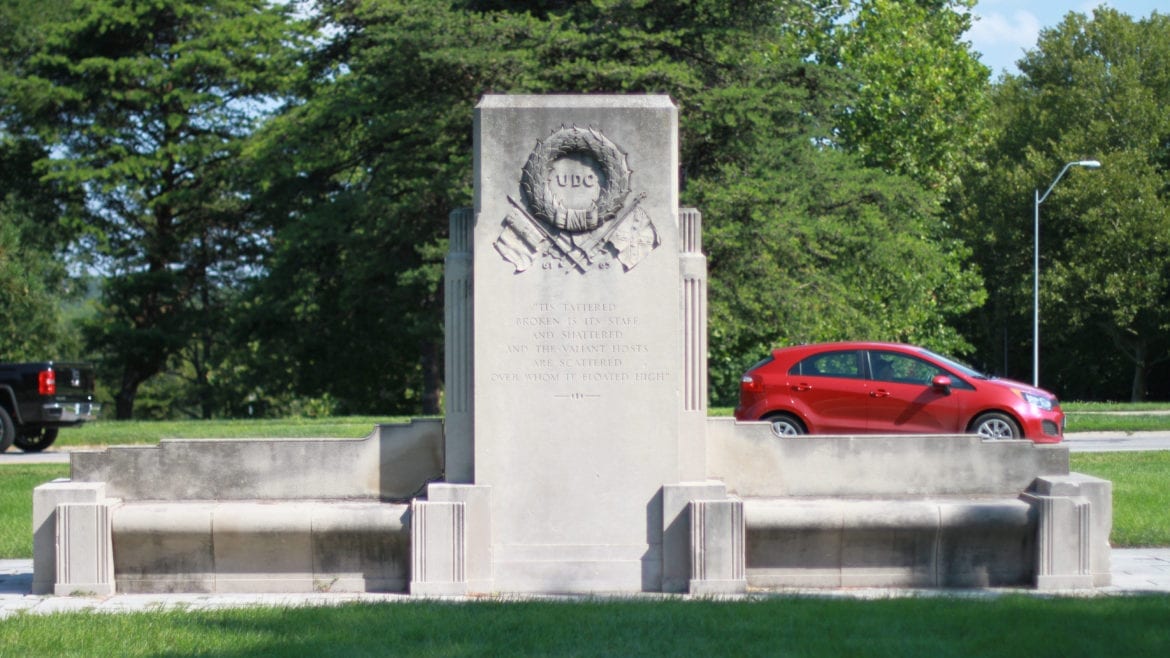 The United Daughters of the Confederacy Memorial was dedicated in 1934. The city is moving it from its spot along Ward Parkway because of the controversy surrounding such monuments around the country. (Cody Boston | Flatland)
Share this story

A few months ago Chris Dixon, who drives on Ward Parkway every week with his family to go to church, sat at a stoplight. Dixon looked over and noticed something on the median where Ward Parkway meets W. 55th Street. He saw it was a monument dedicated to the women of the Confederacy.

The rest, they say, is history. As we’ve been tracking down information about this monument — and other interesting ones around the Kansas City area — Confederate monuments across the U.S. have shot into the spotlight. Spurred by the white supremacist marches in Charlottesville, Virginia and exacerbated by President Trump’s divisive comments, the controversy came home to roost in KC over the weekend. The United Daughters of the Confederacy Monument, at this location since 1958, was vandalized overnight on Friday. By Sunday morning, KC’s Parks and Rec department had boarded up the monument and prepared it for removal.

Daughters of Confederacy have also asked that it be removed. It will be stored until a suitable museum home can be found. https://t.co/Z141Ob2SOG

Ann McFerrin, an archivist with the Parks and Recreation Department, said the memorial honors the civilian women who lived through the difficulties of wartime. It was a gift to the city from Chapter 119 of the United Daughters of the Confederacy, McFerrin said.

“I drove by it for a year without even realizing what it was,” Dixon told curiousKC in an email.

Now this one is on its way to storage, but you can use our map below to see it and other memorials that are off the beaten path.

To use the map, scroll over the colored dots to see the name, location, artist and dedication date of each monument. Keep reading past the map to see a photo of each monument accompanied by its history and background.

Area Memorials Off the Beaten Path The pergola and terrace are based off designs by John Van Brunt. While the mall was not made with Bea Davis in mind, the Kansas City Parks and Rec Department dedicated it to her to honor her work and service with parks and boulevards. The U.S. District Court in Kansas City received a plaque commemorating the bicentennial of the U.S. Constitution. Shirley Wright, the wife of one of the judges, suggested that they choose her art teacher, Kwan Wu, to design a display for the plaque. Wu was a naturalized citizen and emigrant from China. Local lawyers, judges and businesses raised more than $600,000 to fund the sculpture. The hands on the statue are from people in each of the 50 states and represent all ages, races, religions and genders. This memorial commemorates black veterans throughout American history. The memorial includes a walkway connecting a polished granite monument with a flagpole. The sidewalk is lined with benches, lights and oak trees. This memorial commemorates the life and career of Charlie Parker, the legendary jazz musician from Kansas City. The sculptor, Robert Graham, and his wife, actress and model Anjelica Huston, attended the dedication. The bright green sculpture is a large version of Parker’s face. The sculpture wasn’t cast whole but assembled piece by piece, which creates a grid pattern on Parker’s face. James Pendergast, a Kansas City politician and First Ward alderman of Kansas City in the late 1890s and early 1900s, was the older brother of renowned political boss Thomas Pendergast. When James died, his brother used public money to fund the statue of James and his two children. The memorial’s first location was in Mulkey Square in West Terrace Park, and the statue moved to its current location when the construction of Interstate 35 destroyed the square. After the move, some cleaning and repairs, the memorial was rededicated on March 17, 1990. This memorial to President John F. Kennedy was donated by the Campo-Manfre-Barbieri Legion Post No. 151. Joseph Jr. and Michael Cirese donated the eternal flame on top of the memorial, which sits atop a sandstone slab with a bronze bas-relief profile of Kennedy. In the 1970s, the Parks and Recreation Department collaborated with the Kansas City Art Institute to help beautify Kansas City while providing a showcase for artists’ work. Karen Slack was a student at KCAI who was killed during a hit-and-run in Manhattan, Kansas, in 1979. Her parents gave her sculpture to the city, and the department placed it at The Paseo, a location she had been considering for it. This World War I monument is lesser-known than Liberty Memorial, but it honors the 440 men and one woman of Kansas City who died in the Great War. Bronze tablets list each name. The gateway was dedicated on Nov. 11, 1930, and the flagpole was dedicated on the same day 10 years later. The Kansas City chapters of the Daughters of the American Revolution and Sons of the Revolution placed the memorial. N. Clyde Degginger willed money to the city so it could purchase a bronze statue. Degginger owned a general store in Kansas, but he lived the last 40 years of his life in Kansas City. The sculptor, Henry Moore, designed the statue to complement the agriculture of the plains. Moore lived in England, which is where he got the inspiration for the abstract statue. Sculptor Phimister Proctor was thinking about creating a tribute to pioneer women when Howard Vanderslice, a member of the Kansas City in Art Commission, approached him about the same idea. Vanderslice had stipulations to its creation, including never revealing the cost of the project, as well as destruction of the molds so the memorial could not be duplicated. It’s located near a branch of the Santa Fe Trail. The memorial represents the struggles of pioneers who headed West despite the challenges. It was restored and rededicated in 1989. The Rev. John W. Williams is memorialized in 7 feet of bronze. Williams was a civil rights activist and pastor of St. Stephen Baptist Church, located on Truman Road and The Paseo. Tom Corbin, a local sculptor, was selected from a national competition. According to the Parks and Recreation Department, William’s widow liked the bust of her husband that Corbin submitted him to the competition, and he won unanimously. The cannon, named “Sancho el Bravo,” was cast in 1856 in Spain. It made its way to Santiago, Cuba, where it was used to defend the Cuban coast. When the city surrendered on July 17, 1899, to American forces, the arms from the city were dispersed around the United States. Most were melted for use in World War II, but Kansas City’s cannon survived. Ann McFerrin, an archivist with the Parks and Recreation Department, said the carriage it sits on was designed by John Van Brunt, who designed many buildings in Kansas City and parts of the parks and boulevards system. The carriage has fallen apart, and the cannon has been put in storage until a new carriage can be built, McFerrin said.

United Daughters of the Confederacy Memorial This memorial to the women of the Old South was a gift to the city from Chapter 119 of the United Daughters of the Confederacy. The memorial honors the civilian women who lived through the difficulties of wartime, said McFerrin. The memorial was moved to its current location in July 1958.

Chris Dixon had heard us talking about another curiousKC story on 90.9 The Bridge, and that prompted him to ask his own question. You can ask yours here:

— Catherine Wheeler is a multimedia intern for Flatland. She is a graduate student studying journalism at the University of Missouri, Columbia. Catherine has a bachelor’s degree in English-Writing from Fort Lewis College in Durango, Colorado. Additional reporting by Kirstin McCudden.