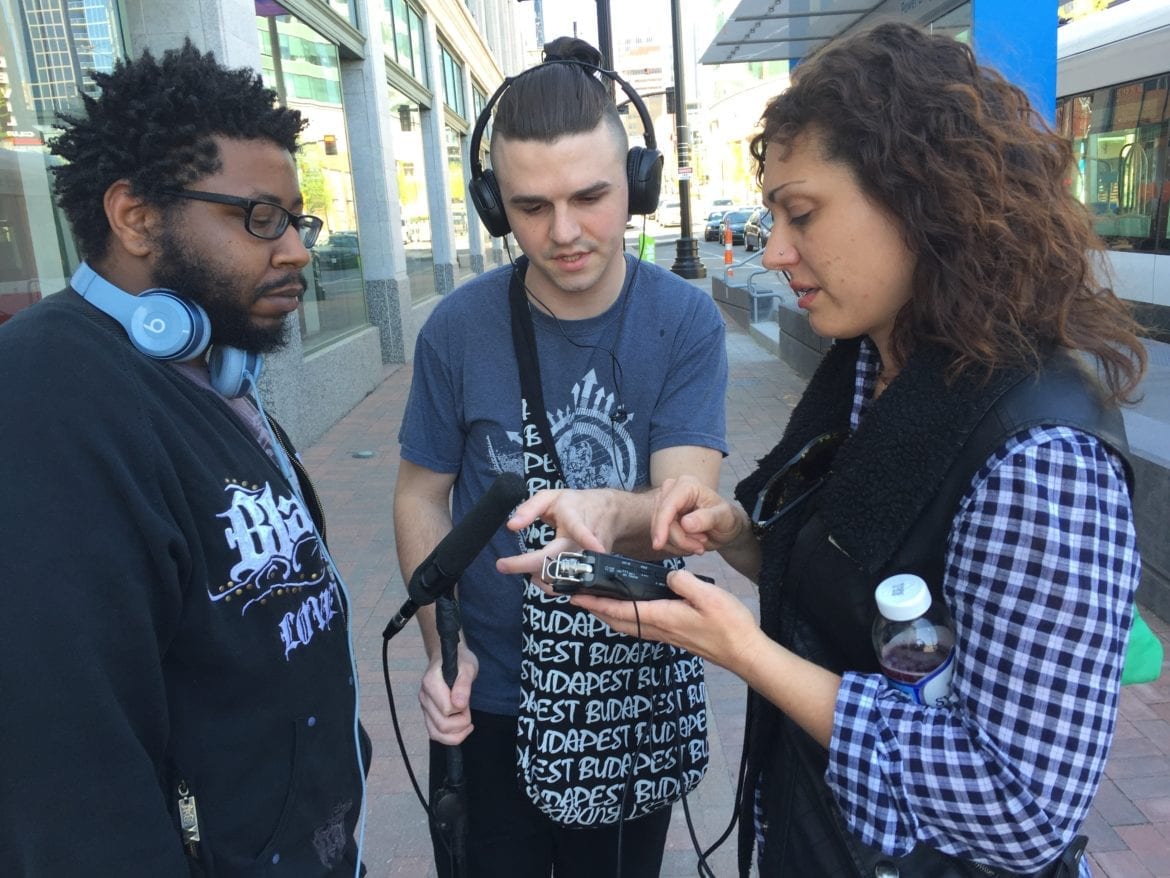 Above a shop in the Crossroads Arts District a group has assembled with video equipment to venture out for street reporting.

“Where do you guys want to go?” Lisa Marie Evans asks the others. She lives in the space adorned with framed artwork that has a sophisticated balance of welcome and edge.

“P & L,” Josh Atkinson says. He’s referring to the nearby Power & Light District, where there may be good chance of catching people in the late afternoon.

Evans turns to Cleveland Neal and asks what kind of microphones he is using.

“Do you just want to ask the same questions as before?” Hope Austin says to the group, including Ayah Abdul-Rauf who has now joined them as they gather their reporting gear.

Evans carries a bag filled with water bottles. She asks if they need a tripod.

“I’m just going to be there as a resource for you,” she says as they head out the door.

Evans’ resource role is one of co-producer and mentor to the four young people who are part of KCPT’s Beyond Belief crew. For the last few months they have been interviewing people on the street and reporting at events for the project that looks at faith and religion in Kansas City.

Beyond Belief is part of a larger project called Localore: Finding America, a project created by AIR, a Boston-based collective of independent media makers.

Washington, D.C.-area producer Steve Mencher has been placed by AIR in Kansas City to lead KCPT’s Beyond Belief project. He brings with him a diverse background that includes theater, media, radio, television, and video. His work has taken him to Carnegie Hall, NPR, and the U.S. Department of Defense.

“What is needed in media is to find new and better ways to connect people so the media doesn’t come from some place on high,” Mencher said of the Localore project.

Mencher connected with KCPT to create the Beyond Belief initiative, which has as its primary goal to encourage people of different faiths to get together while documenting the important events of the faith community.

In the last few years Flatland, KCPT’s digital magazine, had covered topics in religion, but recognized a need to go deeper.

“They were looking for a way to engage with these communities,” he said. “They also wanted to have a strong training component because diverse voices in the newsroom is one of the things that mainstream media has not always done a great job of. So we said, ‘We are going to find some fabulous people and give them responsibility and challenge them to achieve and put them right in the middle of this project.’”

That’s where the crew on the street comes in. Mencher selected Abdul-Rauf, Austin, Atkinson, and Neal. He brought on Evans as co-producer, mentor and teacher.

Just beyond the Alamo Drafthouse on Main Street the group sees a young couple in a pickup truck parked along Main. They agree to be interviewed. When the background noise is too much the couple step outside onto the curb.

During the reporting Atkinson holds the microphone, Neal positions the camera, Austin asks the questions, and Abdul-Rauf approaches subjects to see if they would like to be interviewed.

To a question about the difference between being spiritual and being religious, the young woman tells the producers, “You can be both.”

Afterward Evans joins the group and commends Abdul-Rauf for catching an answer that wasn’t stated in a complete sentence. Abdul-Raul had asked for a clarification to get a better quote. 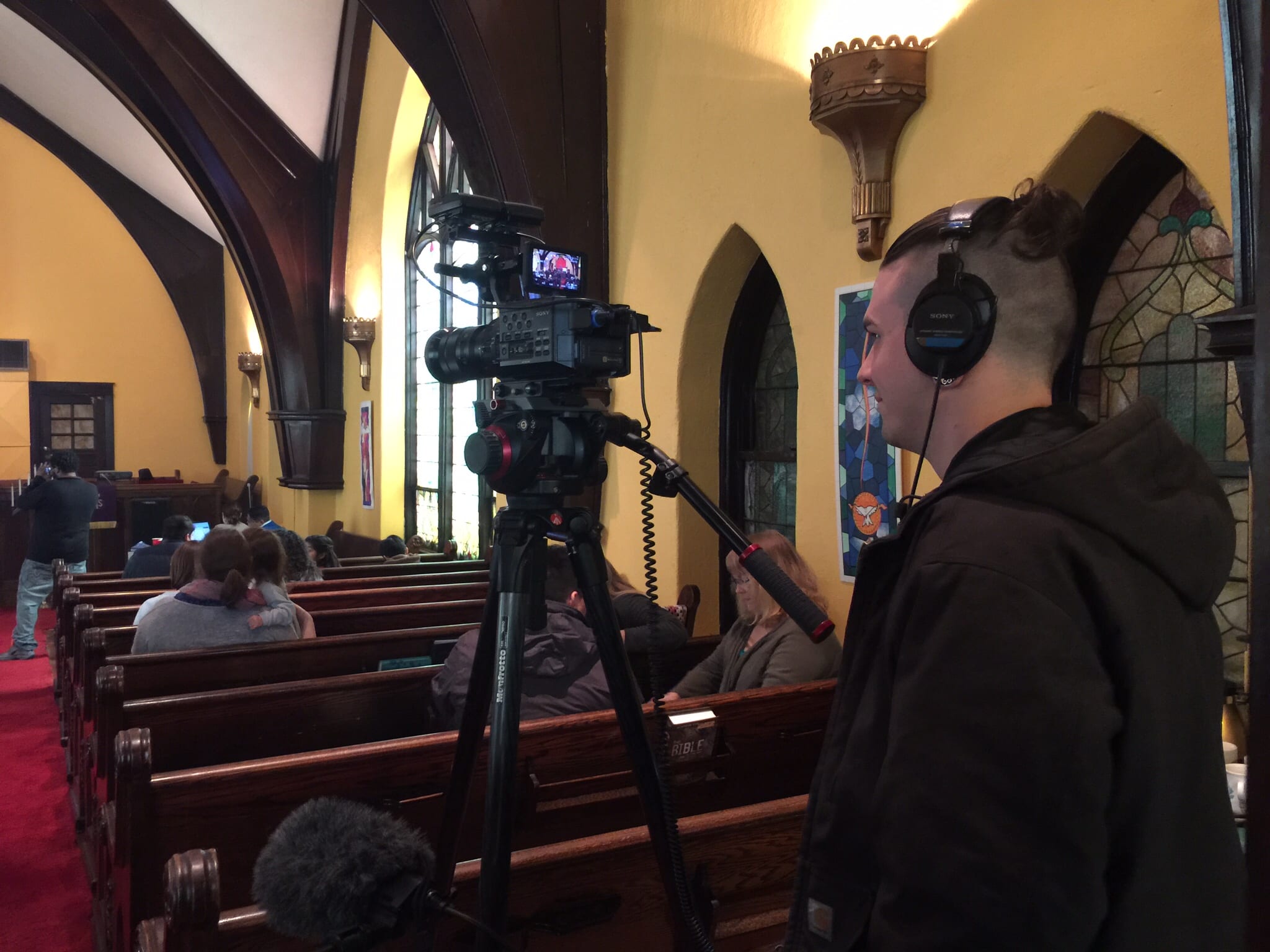 Evans is an experienced filmmaker and artist in Kansas City. She has taught all ages and served as a youth mentor for different groups, such as Jackson County Family Courts in a Sentenced to Arts Project, and Camp Fire USA. She also mentored youth to create a documentary on hate crimes for the organization Youth Out Loud.

Ayah Abdul-Rauf is studying at the Kansas City Art Institute and picked this internship to fit her double major in filmmaking and creative writing. She says the work is challenging.

“You have to be open to a lot of possibilities,” she says. “As a student I am used to predictability. I am learning a lot from the openness of what will happen.”

“This was probably the best thing for my career, filmmaking wise,” he says.

Hope Austin is editor-in-chief of the University News at UMKC. She says she took the internship because she wanted more multimedia experience.

The assignments are different from print journalism, she says, because you “have to direct people to say things so [anyone] can understand without the context.”

“What is needed in media is to find new and better ways to connect people so the media doesn’t come from some place on high.” — Beyond Belief producer Steve Mencher

Cleveland Neal already has cinematography experience and met Mencher at the Kansas City International Film Festival when one of Neal’s shorts, “Robin Hood,” was shown there. He needed an internship for his program at Avila.

Neal says the experience has him addressing personal challenges. He served two tours in Iraq and has suffered from post-traumatic stress disorder. He says interviewing people on the street is helping him to engage with people again.

“It’s like therapy,” he says. “With a documentary you don’t know what can happen. In a narrative you can say, ‘OK. Cut. Change this.’ It’s all under your control.”

“Everybody has a different skill set,” Evans says. “We take what they are skilled with and see where they want to grow. I want them all to embrace those skills.”

About a dozen people applied for the Beyond Belief group, Mencher says.

“These were the four strongest candidates and it just so happens they are a wonderful group with very different experiences,” he says. “Most important of what we are doing is modeling the idea that there is no excuse not to have a diverse group of producers. They are out there.”

One of the last interviews on this chilly reporting day is in a small park downtown. A man sits on a bench and when the producers strike up a conversation, he begins talking about his dark, troubled past, and the redemption he believes he’s finding in his life.

“If you believe in God that’s all that really matters,” he tells the group, who are lined up in front of him, listening intently, and recording his words.

The producers shake hands with him afterward and thank the man for his time.

The group’s interviews will provide “interstitials” or breaks within a larger documentary to feature the project’s reporting over the past several months.

“Their prime responsibility is to help get from section to section in the documentary,” Mencher says of the group’s assignment. “(Their mission) is for them to connect with people in the community and help in learning the techniques of filmmaking.”

Looking back over the project Mencher says he hopes the station continues to work with the religious community to help solve problems that stem from economic inequity and racial divides.

“Religion is not the most important thing to everyone,” he says, “but I have not seen anything, anywhere, that has replaced religion in being the social fabric of a city, especially in Kansas City.”

Beyond Belief is a KCPT and Hale Center for Journalism project featuring a series of stories and discussions about faith and the different faith traditions in our diverse city. The project is part of Localore: Finding America, created by AIR, a Boston-based network of independent public media producers. Principle funding comes from the Corporation for Public Broadcasting. Learn more about “Beyond Belief” here.