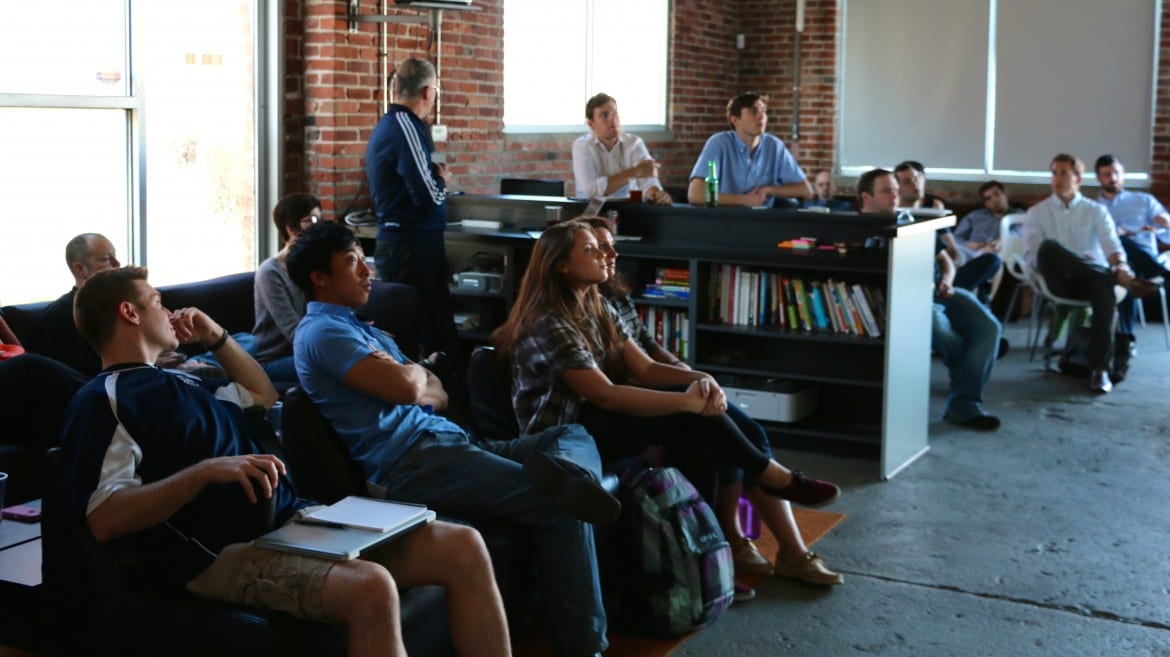 Participants at the Space Apps Challenge learn what their assignments will be for the weekend.
Share this story

Students, developers, designers and marketers split into three groups and build different applications in just three days. All of these efforts are made for a chance to win one of five global awards: best use of data, most inspiring, best mission concept, best use of hardware and galactic impact. There is also an award for people’s choice.

Mike Wilson is the president of Ingenology and he

lped organize this year’s event in Kansas City. Wilson explained that, due to the open government initiative, NASA needed to find a way to get average citizens involved to help NASA reach their goals. Wilson said this is why they created the NASA Space Apps Challenge. This is the third year since its inception, and it has expanded to include 95 different competing locations spanning six continents. The Space Apps Challenge allows participants to use NASA data in order to create solutions for different challenges.

This is the second year that Kansas City has been involved in the challenge. Last year the Kansas City team won the award for best use of data with its app “Sol,” which is considered to be the first interplanetary weather mobile application. Sol lets users see the temperature of Mars in real time, similar to  earth-based weather applications. This year the Kansas City group developed three products: Alviss, Yorbit and the NERO Project. Wilson explained the efforts that Ingenology has taken in order to have another successful year.

“This year we have more people,” Wilson said. “We have got about twice the amount of people, and of course we are trying to out do ourselves from last year.”

Wilson also explained that Ingenology is going beyond just participating in the challenge. “You don’t get a physical award sent to you, and we thought that kind of let us down a little bit. We were hoping for some cool Moon Man MTV award. This year we decided we are going to make our own award and offer it up to winners of all the categories.” Wilson and company collaborated with people from around the world to create a physical, 3-D printed trophy that features the pixelated rocket logo from the challenge’s website.

Ryan Schneider is the Marketing Coordinator for Salva O’Renick and Ingenology. He played a role in making sure that all of the projects chosen to go to NASA were submitted properly. Schneider explained what each of the projects aimed to achieve.

Alviss is an application made specifically for the Pebble smartwatch that allows users to see data and metrics that they deem important, like calendars or vital signs. In order to figure out what data would be the most useful for astronauts, the Alviss team spoke with an individual from NASA who had been in space.

“The deal with that challenge was really [to create] anything that astronauts can wear in space that could make them informed about what’s going on, whether that’s in space, in the space station or if there’s things back home that they need to be informed about,” Schneider said.

The goal was to make sure that astronauts could use the wearable technology to access any information they needed on their wrist. Since an astronaut’s schedule is highly regimented, the possibility to have information easily accessible can make the day-to-day routines in space easier to manage.

According to a video produced by Ingenology, the Alviss project is named after the legend of a wise dwarf with the same name.

Yorbit is a web application that allows the user to access detailed satellite images of earth by region and date, which can then be edited by adding text. According to the description in the official NASA submission, Yorbit aims to “give people a deeper, more unique perspective to specific times and places in their lives through an easy-to-use tool for searching, sharing and personalizing beautiful NASA images of the Earth.”

“One of the examples we had was Cabo,” Schneider said. “You can type in ‘Cabo,’ and you can see a couple different types of views, whether you wanted it day or night. We also worked to overlay Google maps along with it as well…You can go in and add some text, add a few shapes, add color to the text, so you can give that image a bit of a personal touch.”

The NERO Project aims to create an open source platform that, according to the official submission, would utilize the over “20 million DSLR camera owners around the world to become citizen scientists.” The project team aimed to create an artificial intelligence platform which  would use photos from “citizen scientists” to potentially detect abnormalities like asteroids in space almost instantly.

“We are trying to open-source the idea that people have DSLR cameras and they can use those to capture images of space, upload them into the system and really help classify near earth objects through the web-based artificial intelligence recognition engine,” Schneider said.

Lawrence Friedl is the Director of the Applied Sciences Program at NASA. He spent the first day of the Space Apps Challenge in Kansas City, and offered advice to the participants.

The campaign for the NERO Project is based on safety. In a dramatic video produced for the project, the speaker describes a seemingly disastrous situation to the viewer: “Imagine thousands of huge chunks of rock, asteroids bigger than a football field, posing a potential threat to our planet.” The speaker is accompanied by dramatic background music and video of asteroids around the earth. The video goes on to explain how the NERO Project can help protect the planet from a disaster of this magnitude.

Lawrence Friedl is the Director of the Applied Sciences Program at NASA. He explained why he attended the first day of the weekend-long challenge in Kansas City.

“One of the reasons we are here in Kansas City is that we are trying to cover the breadth of the 93 locations of where we are having the challenges this year, and Ingenology, last year, won two awards,” Friedl said.

When asked if he had found an answer for Kansas City’s success he replied “The hosts have really done a lot of the homework to think through a lot of this ahead of the time. I’ve been impressed that this isn’t projects having to come together. They have helped narrow it down and really made sure that they invited people in that they think are going to provide the appropriate skills to do these. I’ve really been impressed by how much forethought that the hosts have put in and that Ingenology has put in.”

Ingenology completed the weekend and submitted two of the three projects to NASA, omitting Alviss. Schneider says that, while Alviss will not be going to NASA, there are other potential applications that earth-bound users could enjoy. Now the teams will wait for NASA’s decision, at which point they can decide to continue to develop the product further for the challenge, outside of the challenge, or stop development completely.

The 10 (OK, 12) Most Significant Chiefs Games of All Time

Where Do You Think They Rank?

Prepping for the Chiefs