Whatever Happened To…Those Other Burger Places?

You Asked and We Couldn’t Leave You Hungry 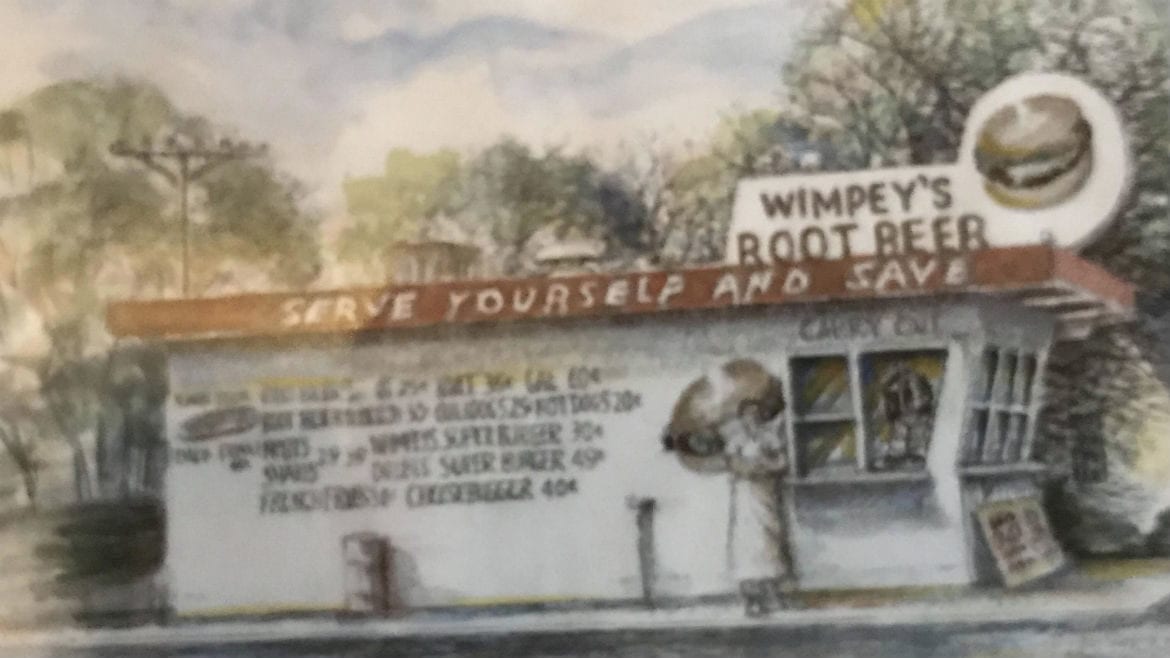 Wimpey's began as a walk-up burger stand on Troost. (Courtesy of Adam Schneider)
Share this story

It was that burger place your mom took you to after you bought shoes or the stop on the way home for an after school treat. Everybody has traditions around food — a restaurant that marks a moment in time or period in your life. Flatland recently told the story of Smaks, a local burger chain from the drive-in era, as part of our curiousKC series.

Whatever Happened to Smaks?The elephant on Johnson Drive stopped traffic. “My dad [Bill Fielder] had met a zookeeper and he asked him to bring over an elephant for the opening of Smaks,” Wes Fielder said. “You’d watch the cars out front and people…

It turns out Smaks wasn’t the only place that Kansas Citians wanted to revisit. Soon after that story published, we got a half-dozen questions about restaurants and doughnuts that have been lost to time. So, we delved into what happened. You can find the questions and answers to your burger questions below and we’ll be back to answer your other food-related inquiries next week. Take a walk back through Kansas City’s food history and, as always, let us know what you’re curious to discover.

Susie Colley asked…What happened to Wimpy’s? Those were the best burgers ever!

The Kansas City Wimpey’s actually had an ‘e,’ in the name. And before we go further, I want you to know that it bears no relation to the national chain of the same name. That Wimpy’s dates back to 1934 when Edward Gold opened the first location in Bloomington, Indiana. It was known then as “Wimpy’s Grills,” a name inspired by the character from the Popeye comics. Wimpy’s had a large presence in Chicago and is still a popular chain today in South Africa. The Wimpey’s in Kansas City was started by Samuel Salvaggio. A merchant marine at 17, Salvaggio returned home from a stint in the Army and opened a walk-up burger shop at 7702 Troost Ave. in 1956.

“It wasn’t anything fancy or special, but it was something that he put a lot of effort into,” Mary Hannan, Salvaggio’s sister-in-law, said.

Salvaggio had been wounded in Korea. While he was awarded a Purple Heart, those wounds cost him his right eye and left him with severe ringing in his ears. Hannan remembers that doctors with the U.S. Department of Veterans Affairs told him that he’d nee`er be able to hold down a job. Salvaggio was determined to prove them wrong.

He had seen a Wimpy’s restaurant when he was stationed in Honolulu, Hawaii, and he had dreamed of opening his own in Kansas City. His wife Mary Helen ran the counter and took down orders on pads. She’d holler out the orders as Salvaggio manned the grill. The first day they made $12. Samuel Salvaggio, at age 17, when he entered the Merchant Marines. (Courtesy of Mary Hannan)

Wimpey’s had three different locations, which served thin burgers and Italian steaks — a blend of beef, veal, breadcrumbs and eggs that was pounded flat — topped with the restaurant’s own barbecue sauce. They also had shakes and tater tots and onion rings and fries. The root beer was made in the basement.

Salvaggio was known as “Uncle Sammy,” and Hannan says he invested in the kids who worked at his location. He helped them take out loans on cars and brought them down to his lake house on Tuesdays. Wimpey’s was closed on Tuesdays in honor of J. Wellington Wimpy. “Wimpy,” as he was more popularly known, was a side character in the cartoon Popeye and he famously and repeatedly decreed, “I’ll gladly pay you Tuesday for a hamburger today.”

Salvaggio retired in 1990 and the restaurant closed three years later. He died in 1993.

“He was plainspoken. He’d never tell a lie,” Hannan said about her brother-in-law. “He was determined to succeed.” Mike Gunter asked… What happened to the Nu-Way drive in? I believe it was on the north east corner of Linwood & Main sts. in KCMO.

Just like Elvis, crumbly burgers have left the building. However, if you’ve got a tank of gas, they’re still within driving reach. There’s five NuWay locations in Wichita, Kansas, and another in Leavenworth, Kansas.

For the uninitiated, NuWay served loose meat sandwiches (Maid-Rite was popular competitor) topped with mustard and pickle made on a custom cooker developed by founder Tom McEvoy. And, yes, they were called sandwiches. Let the burger-sandwich debate commence. Shakes, fountain drinks and Nu-Way sandwiches were all on the menu at the Nu-Way Drive-In. (Courtesy of Kansas City Memories: Facebook Group)

The first Nu-Way opened in 1930 at 1416 W. Douglas in Wichita and it’s still operating. They make their own root beer, served in frosty mugs, and onion rings alongside the crumbly burgers. The success of the burger stand in Wichita led to expansion in Hutchinson, Kansas, and here in Kansas City. Nu-Way briefly returned in the 1980s with locations in the Ward Parkway Center and the Blue Ridge Mall.

“We just closed all of them up because we simply couldn’t run them from out of town,” owner Neal Stong told The Wichita Eagle back in 2010.

If you’re looking for loose meat sandwiches right this very moment, Runza (out of Nebraska) in Mission, Kansas, Mugs Up in Independence, Missouri, and In A Tub in Kansas City all serve their take on a crumbly burger/pocket/taco/sandwich.