You Asked and We Got To Work 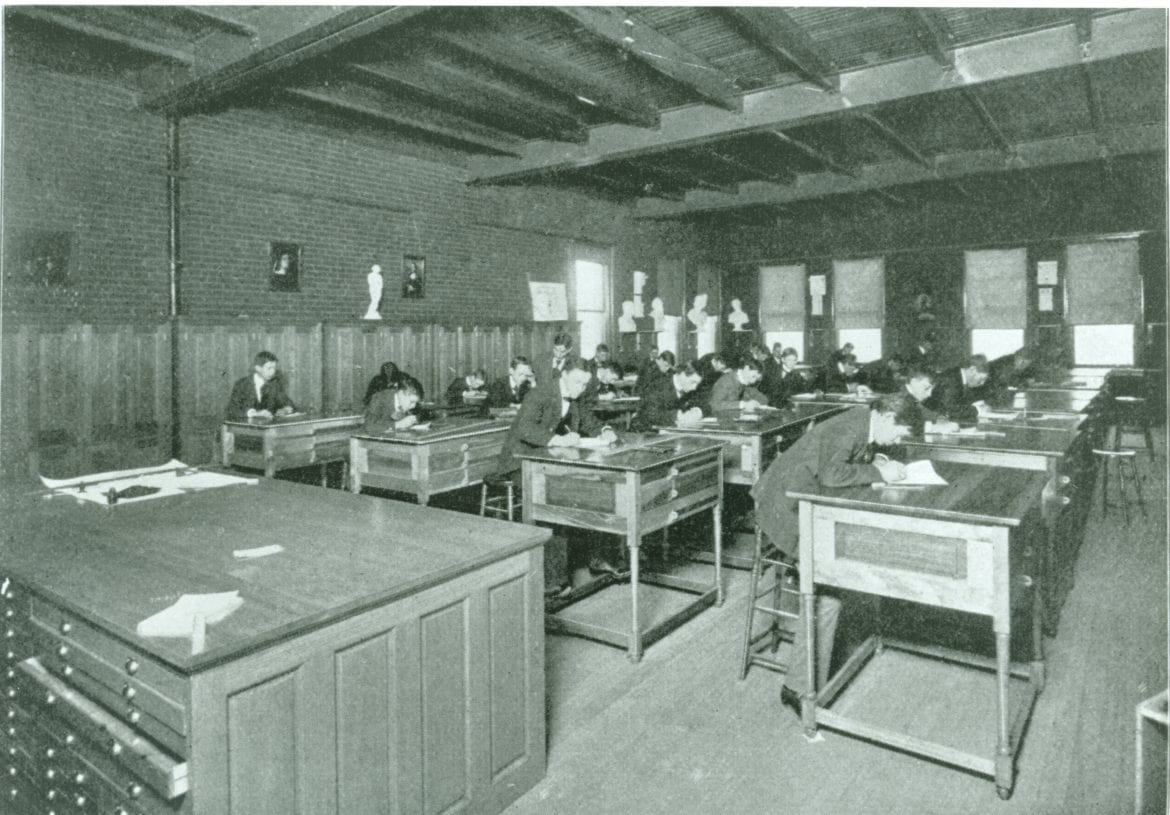 Like so many men of his generation, Jack Harrigan was a small-town kid born early in the 20th century, weathered the Great Depression, fought in World War II, then returned home to raise a family while working a blue-collar job until passing away in 1990 at the age of 75.

His daughter Marilyn Flook wanted to learn more about her father, who moved from his native Scammon, Kansas, to Kansas City in the 1920s. Flook turned to curiousKC, our initiative that invites you to tell us what you’re interested in, to seek information about the “location and history of (the) trade high school in Northeast KC early (in the) 1900s.” That’s the school her dad attended.

We will get to that in a moment, but first some background.

With some tracing the roots of “manual training” to Johann Heinrich Pestalozzi (1746-1827), a Swiss educational reformer, one of the first of these types of schools actually began in the state of Missouri.

Calvin Woodward, the dean of polytechnic faculty at Washington University in St. Louis, opened Woodward’s Manual Training School in 1879. The boys school taught the range of subjects you would expect from a high school — science, mathematics and literature — but also required shop work.

“The contrast between the listless and often inattentive attitude of children occupied with some ordinary class-lesson, and the eager eyes and nimble fingers of the same children at the carpenter’s or modeling bench, is most instructive,” wrote Sir Philip Magnus, an Englishman and one of the early supporters of manual training.

Adhering to this philosophy, Kansas City’s Manual High School opened in 1897 and still exists today as the Manual Career and Technical Center. That’s where Jack Harrigan went to school.

Media accounts and information from the University of Missouri-Kansas City provide a history of Manual.

The original Manual High School was a three-story brick building on Truman Road that sat just west of The Paseo and Parade Park — where it still sits today. The curriculum included sewing, cooking and art for the girls, and woodworking, forging, steam and electricity for the boys.

But Manual functioned much like other high schools, sending the Vikings out to the gridiron, thespians onto the stage and debaters to tournaments. By 1905, Manual had more than 1,700 students. But for the first half of its history those students would all be white.

Following the U.S. Supreme Court’s landmark 1954 decision in Brown v. Board of Education of Topeka, the Kansas City School District followed the mandate to desegregate its schools.

Manual was the first fully desegregated school in the district, and in the school year immediately following Brown, it merged with the black vocational school R.T. Coles.

After a fire razed the original building in 1969, Manual High School relocated to the former Kansas City Junior College building in Westport. By this time, Manual was moving beyond its original trades, such as forging, and using the latest technology.

The school’s faithful alumni have their own Facebook page, and that is how we found Art Avery, a 1976 Manual graduate.

“You know, we didn’t have the correct books to follow along in the classroom, but it seemed like at the tech school, everything was up to date,” he said in a phone interview. Avery specialized in graphic arts at Manual and then went on to use those skills in the U.S. Army.

Manual returned to its original location in 1990 with the name Metro Tech.

At that time, career counselors helped students pick the right curriculum as they moved from their freshman to their junior years, said Jack Bitzenburg, the former Kansas City Public Schools’ career and technical education director.

The school reverted back to its original name in 1998, but instead of a high school, it became a “career and technical center” that served juniors and seniors throughout the district. 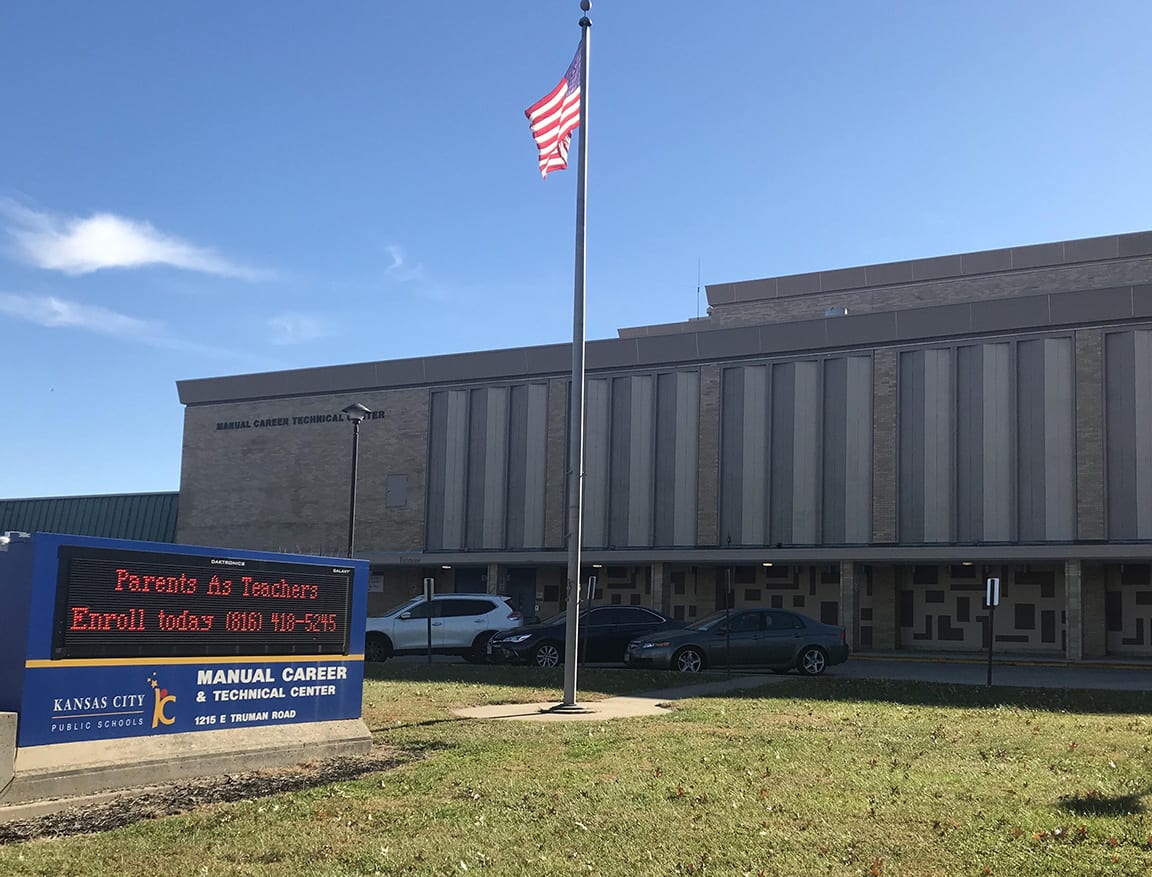 It was soon after this, in 2002, that the American Vocational Association changed its name to the Career and Technical Association. This reflected a broader and more diverse curriculum that included some of the original “manual arts” and also branched out into business, marketing, health care and engineering professions.

“Career and technical education is the idea of getting some work-based experience and knowledge and tying it directly to what students were learning in that classroom … and not like just book learning or just on the job training, but getting those two together,” Bitzenburg said. Manual today is similar to the earlier incarnations in its teaching philosophy.

Programs like construction technology and culinary arts have survived since the school’s founding. Health science, engineering and computer coding have also joined the curriculum.

The focus of career and technical education today isn’t necessarily preparing someone for the workforce directly out of high school. Community colleges have filled the gap in a lot of fields that are more technical and complex.

“The changing nature of work and technology means lot of these individuals have to be older and have more developmental experience,” said Anthony Barbis, a former associate teaching professor at the University of Missouri-Columbia who specialized in career and technical education. He is now a technology resource associate at the university.

Jack Harrigan, whose daughter asked curiousKC about his school, would not recognize many of the fields now taught at Manual, but the teaching method would not be that unfamiliar from when he attended in the 1930s.

This method may become more prevalent in the future, Barbis said.

“This is a trend where I see the distinction between career and technical education and general education blurring, and it’s because of the philosophical perspective,” he said. “I think you’ll see a lot of the techniques in career and tech ed integrated more into regular education, and it won’t be labeled as such. It’ll just be a project that you work on.”

— Jack Harvel wrote this article as a student in a multimedia journalism class at the University of Missouri.