Where, Exactly, is Midtown?

You Asked and We Answered 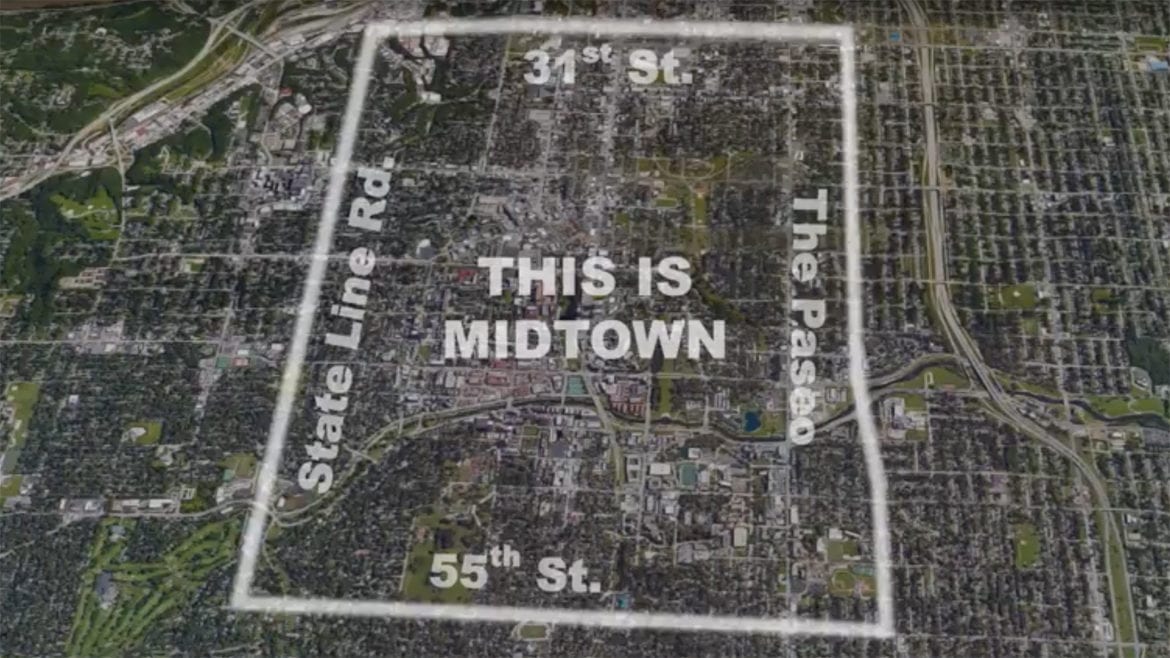 Ask a Kansas Citian where Midtown is, and you’ll hear a pretty wide swath of responses.

Oleha Verlander, who lives in South Waldo, submitted a curiousKC question asking us to narrow it down. “Where/what exactly is considered Midtown,” she asked.

So curiousKC spent an afternoon crisscrossing the city to ask others that same question. We heard everything from, “Around Union Station,” (nope, that’s downtown) to “the Crossroads Arts District,” (nope, still downtown).

So where, exactly, is Midtown?

While the term midtown is generally defined as the middle section of a city, the Kansas City government marks our Midtown’s official modern-day borders from 31st to 55th streets from north to south, and from State Line Road to The Paseo for its east-west outline. That contains around 7 square miles.

The boundaries of Midtown have moved over time and with the sprawl of Kansas City. In 1977 — the earliest we could find Midtown on a map — marked the southern line at 47th Street, which is eight blocks shorter than it is today.

If Midtown were a person, its heart would be Westport, or perhaps 39th Street would argue it’s a beating hub. The greenery of Jacob L. Loose Park would be the left foot, and the Nelson-Atkins Museum of Art the cultured left foot. The right knee would be Midtown’s inside-out mall, better known as the Country Club Plaza. The left shoulder — Martini Corner, and so on.

The anatomy of Midtown aside, there are more than 45,000 people who live in one of Midtown’s 22 neighborhoods.

A famous Midtowner? Painter and muralist Thomas Hart Benton lived in Roanoke until his death in 1975. His home is now a historic landmark.

We gave you the official numbers, but watch the video above to hear where Kansas Citians mark the boundaries, and thanks, Oleha Verlander, for your question. Midtown, downtown or out of town, if there’s something you’d like us to investigate, ask us.

More curiousKC: A Reader Follows Up

Not long after publishing this story, another curious Kansas Citian submitted a follow-up question. Candy Hargrove wrote in to curiousKC to ask, “What are the boundaries of Downtown? Some of my friends consider Westport and Plaza as downtown. My southern boundary is Crown Center.”

Well, Candy, you can tell your friends they should listen to you more, because you’re right.

According to Kansas City Planning and Development, the southern boundary line of Downtown begins at 31st Street and runs north of the river to include Harlem and the Charles B. Wheeler Downtown Airport. The eastern border is State Line Road and the western border is mainly Woodland Avenue. However, this map includes the West Bottoms as Downtown.

The Downtown Neighborhood Association thinks differently. Residents are allowed to join it if they live inside the downtown loop and River Market. Visit KC, our economic and tourism development organization, has the smallest idea of Downtown. It draws the boundaries between 9th and 19th streets and Washington and Locust street.

Thanks, Candy, for your question!

— Ryan Hennessy is a research assistant at Flatland. Reach him at rhennessy@kcpt.org.

This story has been updated to answer a follow-up curiousKC question and correct the spelling of Oleha Verlander’s first name.