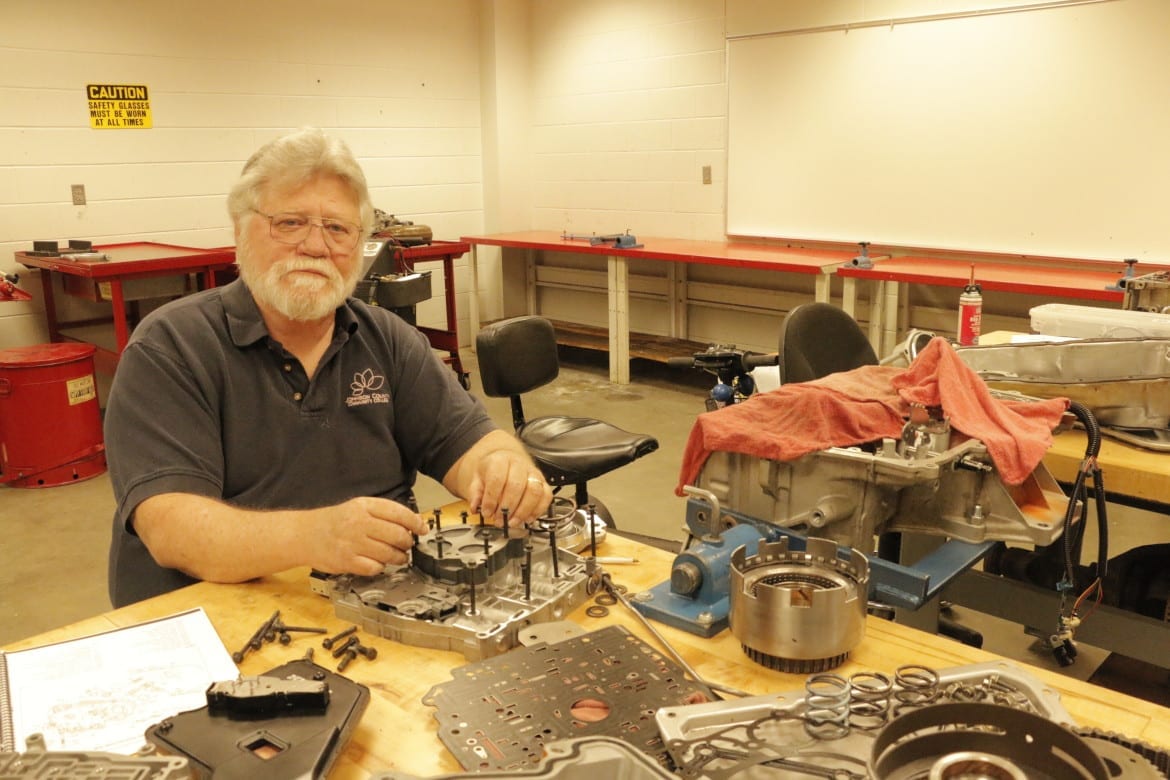 “I don’t think that success just hits you in the ass one day. I think it’s a planned event,” says JCCC automotive professor Bill Brown about his American dream. (Photo: Daniel Boothe | Flatland)
Share this story

William “Bill” Brown emerges from the workshop at his home on his mobility scooter with a smile and a wave. Tom Petty and the Heartbreakers’ “Mary Jane’s Last Dance” can be heard in the background. Lines of motorcycles can be seen in the workshop behind Brown as he launches into a story about how he started riding motorcycles at a young age.

“I was the second of seven kids,” he says. “Dad was a railroader, and Mom was usually pregnant.”

Brown laughs, his smile peering through his gray beard.

“Dad was good at training us and helping us learn about mechanical things, but he said, ‘We don’t have any money to buy stuff for you.’ So, everything I had was something I worked for. I had a little scooter that I’ve had all these years. I mowed an acre yard with a push mower, and a guy gave that to me … and that’s how I got started.” Brown is a full-time professor of automotive technology at Johnson County Community College, where he’s taught for 15 years and helped launch a course for motorcycle maintenance and repair. He’s been involved in the automotive industry for nearly 50 years, working at shops, eventually running his own facility and teaching automotive classes.

Although Brown’s life may appear fairly straightforward, it actually hides a history of challenges, including dropping out of high school, a near-fatal automobile accident, an extensive and difficult road to recovery, and a 23-year journey to obtain a degree.

“So, everything I had was something I worked for … and that’s how I got started.”

Brown says it’s his passion for motorcycles and a desire to enjoy life that have kept him going.

“For me, what I really wanted, as I define my own personal success, is to have enough money to go around and have enough time off to enjoy life, and I was given that gift,” Brown says, gesturing to the collection of over 60 motorcycles, scooters and mopeds in his garage. “I’m a success. I got what I wanted.”

But his path to that success hasn’t exactly been cut and dried. In high school, Brown decided his school was more about controlling people and less about independent thought. So he dropped out to work at a warehouse. After realizing warehouse work wasn’t for him, Brown returned and earned his high school diploma. He quickly moved on to turning wrenches in the automotive industry.

“I worked on VWs and made a commitment to myself that I’d be the best mechanic I could be for 10 years and then re-evaluate,” Brown says. “After nine and a half years, I had a car wreck that nearly ended everything.”

At the age of 28, Brown was struck head-on by a drunk driver driving down the wrong side of the highway. The accident was nearly fatal, and Brown says doctors initially told him he would be a quadriplegic and likely never work again.

“Some of the thoughts I went through in the first 30 days or so were, ‘Why did I live?’” Brown pauses briefly and glances to the floor. “You know, a mechanic that’s paralyzed is not much good. … I kind of fell back on my spirituality and said, ‘OK, you’ve done this to me now; there must be a reason. What’s next?’ Within just a few days, I came to the realization that I needed to concentrate not so much on what I had lost, but on what I had left.”

After being released from a nearly yearlong stay at the hospital, Brown decided he would work toward his Associate of Arts degree at the very college he’d end up teaching at years later, JCCC. His plan was to transfer to Pittsburg State to earn a bachelor’s degree in vocational education.

Recovery, however, wasn’t without its challenges, and alcohol was in and out of Brown’s life. When his second marriage began to fall apart, his drinking became more prominent.

After struggling through a divorce, Brown returned to JCCC and earned his degree, working to kick the alcohol habit throughout the process.

“I had some demons there. … Nothing good happens when you get drunk. You say things and do things that you really shouldn’t do, some that you wouldn’t do if you weren’t under the influence. I made enough stupid mistakes, and I don’t want to make anymore, so I just don’t drink anymore.”

After earning his A.A. degree, Brown did what doctors told him he wasn’t likely to do. He returned to work. He taught auto tech at the now-defunct Bailey Technical College in Kansas City for four years, then ran his own automotive shop for a number of years before ultimately beginning work at the General Motors Training Center, where he worked for 12 years.

A bachelor’s degree, which Brown didn’t have, was a requirement for working with GM. But because of his mechanical expertise, he was able to earn the job as long as he worked toward his degree, taking one class per semester at Pittsburg State.

It was at GM that Brown met colleagues he’d continue working with long after leaving GM. One of those colleagues shares not only the same name as Brown but also the same birthday. The two were born four hours apart, albeit across the country from one another. John William Brown, who also goes by Bill, initially met Brown at GM in the mid ’80s. Eventually, he would go on to become the technology department dean at JCCC, initially hired as assistant dean of industrial technology in 1999. Dean Brown, who retired from JCCC in 2015, kept in contact with Brown through the years before working with him again at JCCC.

“He wanted to work on his bachelor’s. … He slugged through that,” Brown says. “To find time to do even one course per semester is a pretty good challenge. He hung in there. It was a really proud day when he completed his bachelor’s.”

Eventually Brown moved on from GM to teach at Longview Community College for a year before taking a semester to finally achieve his bachelor’s degree at the age of 53, 23 years after he began. Shortly after that, he began his work at JCCC.

“At the time, and I think it’s still this way, nobody in the KC metro area was doing anything in terms of motorcycle maintenance,” his friend says. “A couple of them … had the rider safety course, but [Brown] wanted to do a maintenance and repair class. I worked with him, and he got through the flaming hoops there on campus, and he’s been teaching that for probably a dozen years or so now.” A passion for motorcycling is one thing that Brown hopes to pass on not only to students but also to family and friends.

“[I’m] putting together legacies, like these motorcycles that a lot of people have never seen. That’s part of what I want to leave and … ” Brown says, pausing for a moment to gather his thoughts. “And if I don’t need to sell the bikes in order to stay alive, then my plan is to give them to motorcycle people. People who can appreciate them. … If I give them a motorcycle that they can play with and enjoy, maybe take to bike shows, or even just put it in their den and have it there to look at, I think that’s probably a worthwhile thing.”

Success, though, is something that Brown thinks everyone can find.

“Everybody has to define their own success,” Brown says. “I don’t think that success just hits you in the ass one day. I think it’s a planned event. My ultimate goal in success has been to have enough time off to enjoy my life. Summers, when I don’t have school, I get up, go outside and sit out on my patio and drink a cup of coffee and look out over my meager 2 acres, which isn’t much, but … we do have a good life.”

Shelter Operator Has No Roof Overhead As Temperatures Drop

‘Boxing kept me off the street.’

American Dreaming | To Return, as an Inspiration

‘I want to go back home’