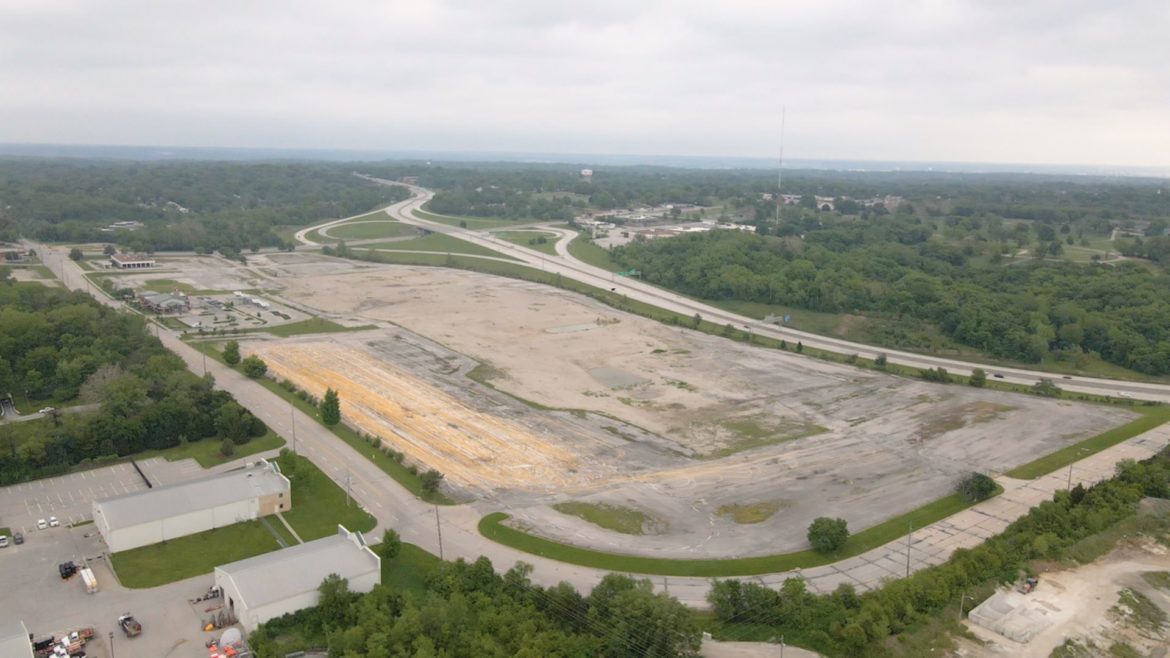 Scavuzzo's Foodservice Co. plans to build a new distribution center as part of a proposed KC Foodie Park on the site of the former Indian Springs mall. (Cody Boston | Flatland)
Share this story

Wyandotte County pines for the day when new development life sprouts from the vacant lot where the old Indian Springs mall once stood.

The forlorn tract, which once served as the hub of the county’s commerce at Interstate 635 and State Avenue, epitomizes decades of economic decline in older parts of Wyandotte County. Despite an explosion of development in the county’s western suburbs and an Amazon Fulfillment Center that set up shop in 2016, poverty continues to plague many older neighborhoods.

Last September, Scavuzzo’s Foodservice Co. received approval from the Unified Government of Wyandotte County/Kansas City, Kansas (UG) to develop a $140 million multi-phase project on the site of the old mall, which was demolished in 2016.

The Scavuzzo’s development site lies in one of 8,762 Opportunity Zones across the country. The Opportunity Zone program makes trillions of dollars available for reinvestment in economically distressed areas. Investors can defer paying capital gains by redeploying that money in one of these zones, with the maximum benefit going to those who wait 10 years before cashing out.

Scavuzzo’s, which is based in Kansas City, Kansas, plans a “KC Foodie Park” development that would include a 266,000-square-foot food service distribution center; a 20-acre solar energy field; neighborhood retail, entertainment and restaurant uses; and a new headquarters office for Scavuzzo’s.

“We appreciated when (Scavuzzo’s CEO) Richard Scavuzzo and the family came to us and expressed that they wanted to help create a new chapter for that location in Wyandotte County,” said Katherine Carttar, the UG’s director of economic development.

Greg Kindle, president of the Wyandotte Economic Development Council, said the Scavuzzo development would create jobs “close to where our workforce lives, particularly our working poor.”

Kindle said other development proposals were considered, “but it was very important to look at one with which we could drive development, drive revenue into the community.”

The Opportunity Zone designation that includes the Indian Springs tract was one of the components that made it “an attractive site” for Scavuzzo’s to consider for development, Carttar said.

But Carttar said Scavuzzo’s development plan hinges on a “very complex deal,” and that the company is “still exploring all their options and have not pulled the trigger” on whether to utilize Opportunity Zone incentives for the project.

“Opportunity Zones are not going to make a bad project good,” Carttar said. “They’re also not going to make a mediocre site suddenly a great site. But it is one more thing that, if all the stars align, that could be the thing that provides some extra benefit to get a project done in a distressed census tract.”

The UG has approved incentives for the Scavuzzo development that include tax increment financing, through which new tax revenues generated by a development may be used to pay for the costs of things such as site preparation, infrastructure and other eligible costs.

Scavuzzo’s has been operating in the Kansas City area since opening a butcher shop and meat market in 1924, according to its web site. In recent years, the company expanded into serving as a broadline food distributor for restaurants and casinos in 14 states.

Richard Scavuzzo could not be reached for comment on this story. However, he sounded optimistic when pitching the plan last year.

“We really fell in love with the Indian Springs site, and thought it would be a perfect distribution site for us,” Scavuzzo told the UG’s Economic Development and Finance Committee in September.

“We quickly learned that EDC had better plans for the property, and we started negotiating on what it would look like to have more than Scavuzzo’s distribution on there…,” Scavuzzo said. “We really feel like what we came up with is a really good compromise.”

The current plan roughly splits the tract between the Scavuzzo’s distribution center and related food and retail enterprises.

“What we really want to key on in this whole site is independently owned, locally owned partners, because that’s who our customers are, that’s who we interact with all the time,” Scavuzzo said. “I think that’s what is really going to bring the community together and make this all successful.”

Carttar said the construction delays were caused by issues related to hammering out a variety of development and land acquisition details, and Scavuzzo’s “getting all their financing in place.”

In addition, Carttar said the “complexities of the Opportunity Zones” also have been a factor in the development delays.

On top of all that, Carttar said the COVID-19 pandemic “has put an extra layer of challenge on everything trying to move forward.”

Nevertheless,  Carttar said the UG feels “very confident” that the Scavuzzo development will move ahead to a successful completion.

“They have assured me that they are still on target to break ground prior to the deadline we’ve given them for the end of summer,” she said. “We want to make sure from the UG perspective that we do this correctly and we do it right the first time. No one wants them to go out and just put a backhoe out there and move some dirt around.”

Kindle also takes a sanguine view of the construction delays.

“That site has been sitting there for a very long period of time with little to no activity,” he said. “We’re talking about a few months. In the course of the overall development it’s a very small amount of time. Long term we’re looking for success, and that’s more important than just jumping into it.”

The COVID-19 pandemic has presented significant challenges to supply chains in general and to meat distributors such as Scavuzzo’s. Kindle acknowledged that the pandemic brings an additional level of uncertainty to all development plans.

But Kindle added that COVID-19 actually could lead to a greater appreciation for what Scavuzzo’s and similar companies do.

“I think what the pandemic has illustrated is an even greater need for food logistics,” Kindle said. “When you look at the logistics model that Scavuzzo’s uses, to me there’s an even bigger demand for what they provide. We need to do a better job of having our supply chains in order within every metropolitan area, around food in particular.”

Last week, news emerged that the impact of the pandemic on communities of color had spurred the White House to look at extending the Opportunity Zones program, which is currently scheduled to sunset in 2021.

“I think that would be great,” Carttar said.

“If nothing else, I do see Opportunity Zones as a great marketing tool,” Carttar said. “It helps drive interest to areas where we would like to see development. Whether the tool is utilized in the end or not, the more people and companies I can get focused on specific areas, that doesn’t hurt.”

Similarly, Kindle said Opportunity Zones have been used as a hook to draw development to certain locations, and success does not depend on whether or not Opportunity Zone tax incentives are ultimately taken advantage of.

“We have a lot of incentives available to us,” Kindle said. “They all have their place, they all have their time. Ultimately, what we’re after is to increase overall wealth in Wyandotte County, and we think we landed on the right census tracts to do that. Hopefully, whether the Opportunity Zones come to fruition or not, we’ve landed on the right relationships to drive the kinds of projects that will ultimately drive economic growth in the county.”

Flatland is exploring the implementation of Opportunity Zones in the Kansas City area, on both sides of the state line, and tracing their impact. Take a look each Wednesday through June 10 as we examine the nuances of the law and the forces behind the opportunities. Next week, we’ll take a closer look at the Old Northeast area of Kansas City, Missouri.

Could Strong District Attorneys Be a Solution for Police Accountability?

Effort in Wyandotte County May Be Instructive

Cliffhanger: Boulevard Drive-In Open to Anything for 70th Season