Calls for Peace, not Pacifism 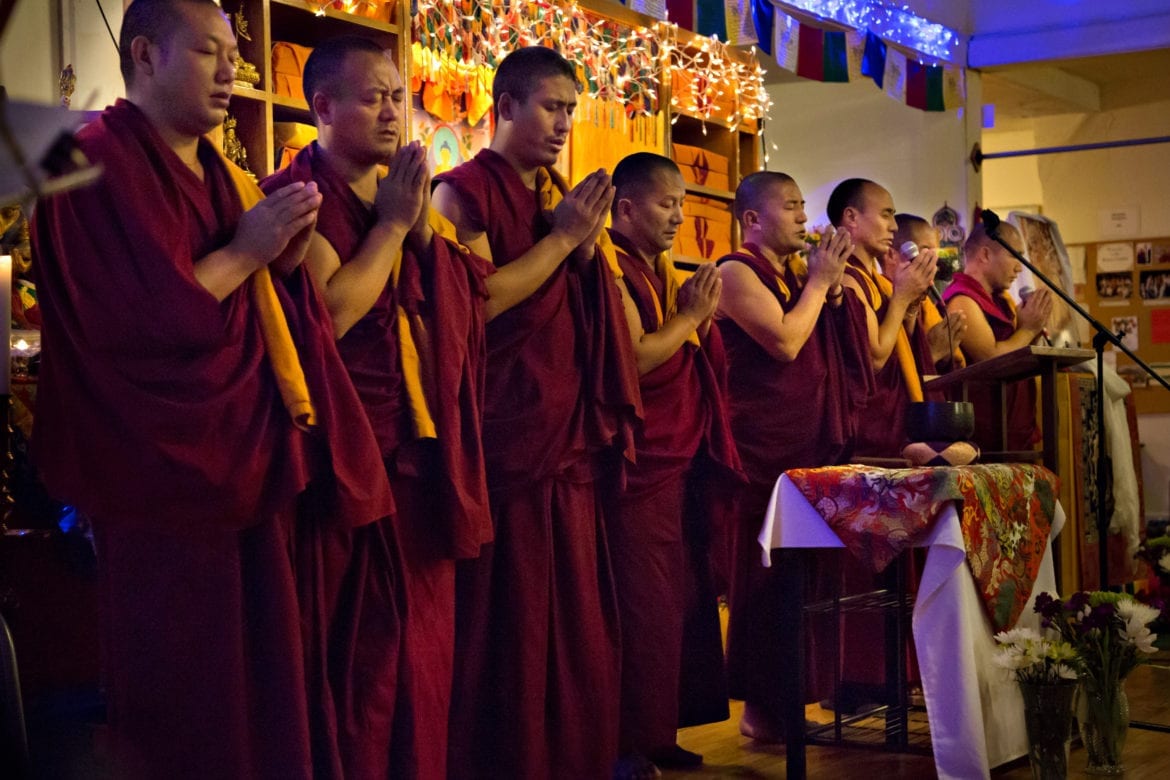 It was dark and cold outside Saturday as celebrants filled the venue on Kansas City’s West Side.

But this crowd was not gearing up for a party in the final hours of the year; it was instead a predawn gathering at the Rime Buddhist Center for the city’s 31st annual World Peace Meditation.

Kansas City’s service begins so early because it is part of World Healing Day, which calls for the observances to begin at noon Greenwich Mean Time.

He sat on a bench along the back wall behind rows of folding metal chairs. The service ran for about an hour.

An entryway table at the Rime Buddhist Center in Kansas City featured this Tibetan Nepal prayer wheel — each time the cylinder is spun, a million prayers from Earth ascend as a heavenly scroll. (Photo: Serena S.Y. Hsu | Flatland)

Members of the Greater Kansas City Interfaith Council offer up their individual prayers for peace.

Gabi Otto, executive director of Rime Buddhist Center, brings out a plate of food for attendees at the conclusion of the service. (Photo: Serena S.Y. Hsu | Flatland)

Diane Burkholder speaks on behalf of One Struggle KC, the organization receiving the 2016 "Bodhisattva Award."

The ISKCON Rupanuga Vedic College musicians begin the sunrise ceremony with a Kirtana, a devotional recitation.

Just inside the entry sat a table with 100 votive candles, lit by worshippers in the Tibetan Buddhist tradition of ushering in the light of truth.

A group of Tibetan monks, part of an exiled group living in the Drepung Gomang Monastery in southern India, sat cross-legged on the floor at the front of the room. The service coincided with their trip to Kansas City as part of a U.S. tour to raise awareness about their cause and money to support their community.

“I think after 2016,” he said, “we could definitely use a little more peace in the world.”

Speakers included Sam Nachum, who is Jewish, and Ahmed El-Sherif, a Muslim. Both men are natives of the Middle East and befriended each other when they ended up living in Kansas City.

The men appear together often throughout the community as symbols of interfaith reconciliation. But this time, Nachum spontaneously swapped his yarmulke for El-Sherif’s beret.

They embraced, and of his friend, Nachum said, “What a gift.”

The service also included a group meditation, but a common theme throughout the morning was that peace did not mean passivity.

Speakers invoked the ongoing protest against the Dakota Access oil pipeline near the Standing Rock Indian Reservation in North Dakota, along with efforts to combat discrimination against Muslims and gays.

This year’s event also honored One Struggle KC with its Bodhisattva Award, named for the Sanskrit term for one whose essence is enlightenment. One Struggle KC is a social justice coalition formed in Kansas City two years ago during the racial flare-up in Ferguson, Missouri.

Co-Founder Diane Burkholder said the award reinvigorated her for the coming year.