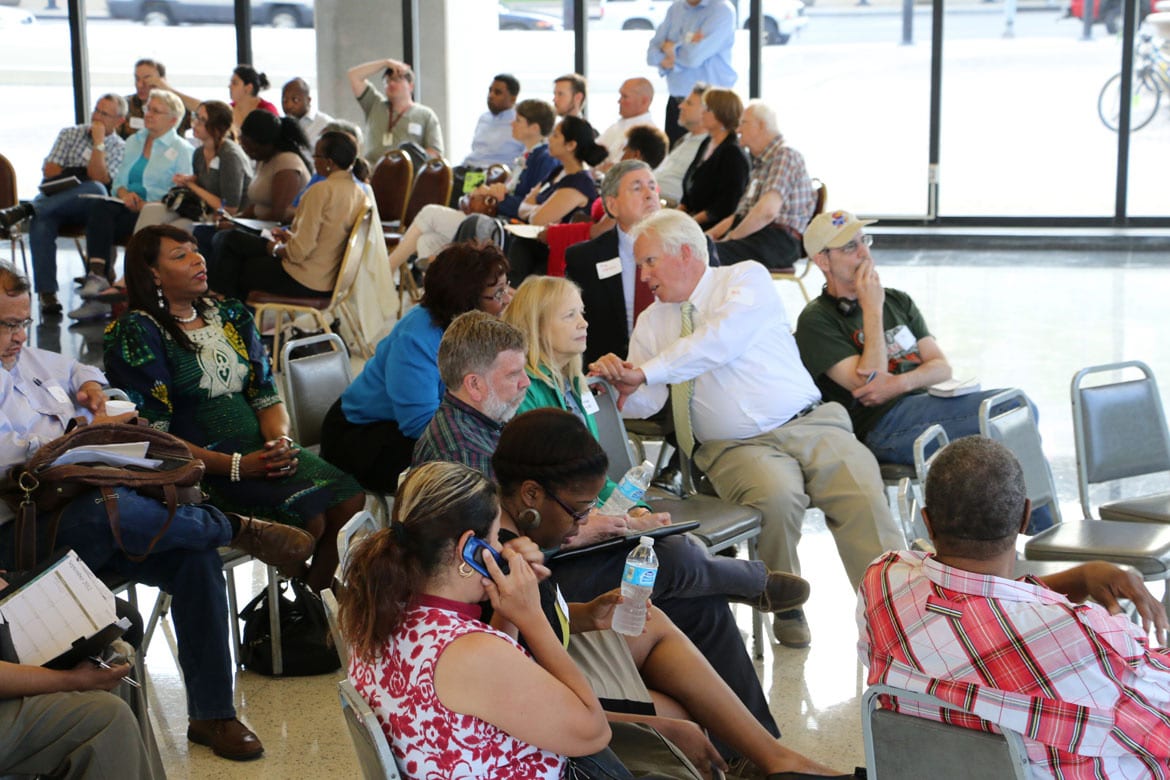 A town hall forum on a Wyandotte County health initiative drew a standing-room-only crowd to City Hall Thursday evening, but that level of interest didn’t mean participants believed government officials would follow through with the plan.

In reporting feedback from their break-out sessions, facilitators said many attendees were skeptical because they felt City Hall had not delivered for them in the past.

“Trust was a big concern,” said Gordon Criswell, assistant county administrator, who summarized the sentiment as, “We have been let down time and time again, and so … don’t set us up to fail again.”

Criswell said no one in his group mentioned any specific instances — it was just a general feeling that City Hall has let them down before.

County officials convened the forum to start gathering input on an idea, championed by Kansas City, Kan., Mayor Mark Holland, to create a healthy campus on the western edge of the city’s downtown.

Holland unveiled the idea in his Feb. 25 State of the Government address.

The mayor said he’d like to see a multi-faceted area sprout from two anchors proposed for the property around 10th Street and State Avenue: a grocery store and a new community center operated in partnership with the YMCA of Greater Kansas City.

Those two projects alone, he said, would represent roughly $30 million in economic development in that area of the city. Holland said he hoped both facilities could be operating within the next three years.

Elected officials from the Unified Government of Wyandotte County/Kansas City, Kan., have pledged $6 million in casino proceeds toward the community center.

And at the forum, Holland announced a $1 million grant from the Wyandotte Health Foundation for the healthy campus.

Foundation CEO William Epperheimer said it was the largest grant the foundation has made in its 17-year history, with the intention that money would go primarily toward the community center and perhaps a health clinic that would serve the uninsured and the underinsured.

The Unified Government has hired Gould Evans, a planning and architecture firm, to create a master plan for the campus. Organizers said they would incorporate community input from forums like the one held Thursday.

Holland said the skepticism expressed by some of the attendees, to a certain extent, represented the general distrust today of government at all levels.

Steps like the public forum, he said, are one way to regain the confidence of the community. But then, he said, you have to follow through.

“There is no shortcut to trust,” he said.

Other common themes that emerged from the break-out sessions were that the campus should be safe, well-lit and in keeping with the surrounding communities. Participants also said they’d like to see a broad mix of housing serving young and old alike.

Holland has said the Unified Government has been negotiating with a developer to bridge a financing gap to build the downtown grocery store.

On Thursday, YMCA CEO David Byrd outlined a list of amenities that community members had indicated they would like to see when the YMCA conducted a survey two years ago. The items included a teaching kitchen where people could learn to prepare healthy food, exercise equipment and community rooms.

Holland said he envisioned a facility of approximately 40,000 to 50,000 square feet that would incorporate the existing John F. Kennedy Community Center at 1310 N. 10th Street.

It’s important, he said, that they build a facility that is not only affordable to build, but also to operate.

Organizers of the forum said they would hold another gathering in August to give a progress report.

“I think we’ve got a big challenge ahead of us,” said Graham Smith, associate vice president with Gould Evans.

Fred White was one attendee at the forum. He is a native of Kansas City, Kan.

One opinion he expressed in his break-out session was that there needed to be a liaison at the campus to the school district and to public housing residents.

As someone who has seen promises come and go, White said he had no choice but to be skeptical of this current plan.

He liked the idea, though. “I hope it carries through,” he said.