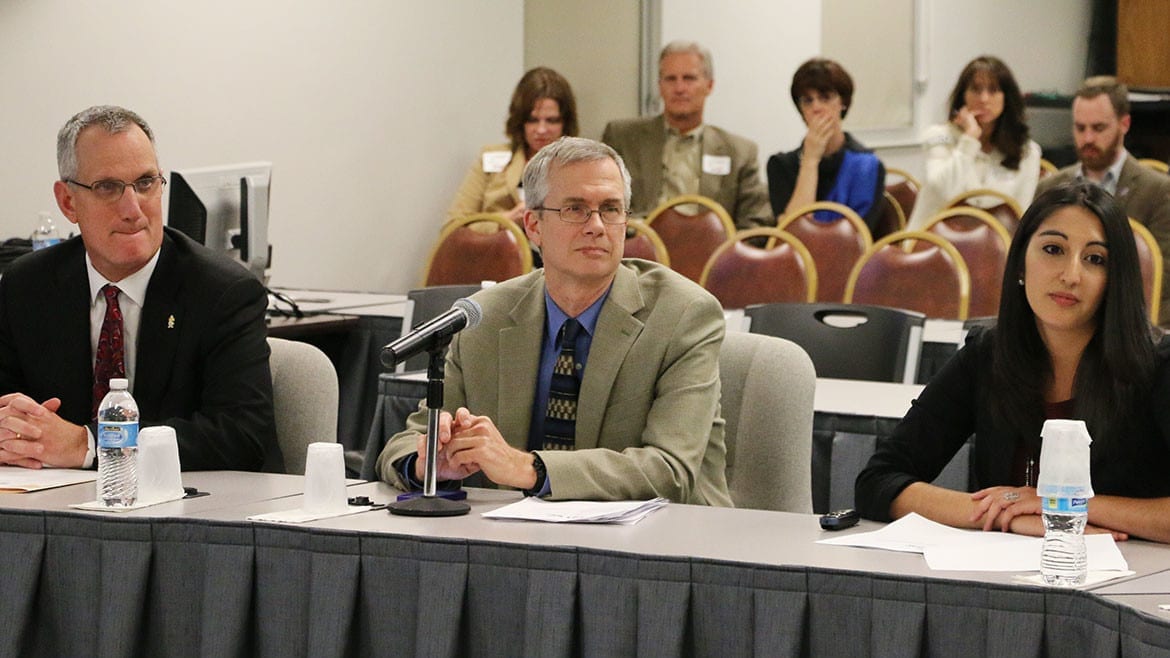 Representatives of Tobacco 21 | KC, a campaign to make 21 the legal age to purchase cigarettes in the Kansas City area, listened Monday night as they made their pitch to a legislative committee of the Unified Government of Wyandotte County/Kansas City, Kansas. The speakers, from left to right, were Dr. Robert Simari, executive dean of the University of Kansas School of Medicine; Dr. Edward Ellerbeck, chair of the Department of Preventive Medicine and Public Health at the University of Kansas Medical Center; and Rebecca Garza, Tobacco Free Wyandotte Coordinator. (Photo: Mike Sherry | Flatland)
Share this story

Supporters of banning the sale of cigarettes to teens and young adults in the Kansas City area may be close to landing their first major coup.

On Monday night, a legislative committee of the Unified Government of Wyandotte County/Kansas City, Kansas, one of the region’s largest municipalities, endorsed revising its legal code to ban the sale of cigarettes to anyone under the age of 21. The current age under state law is 18.

“We know it’s important,” Commissioner Melissa Bynum told representatives of the Tobacco 21 | KC campaign, an initiative of Healthy KC, which is a partnership between the Greater Kansas City Chamber of Commerce and Blue Cross and Blue Shield of Kansas City.

The full commission could consider the revisions as early as next month, said Commissioner Ann Brandau-Murguia, who is championing the campaign among elected officials in the unified government.

Announced last Thursday, Tobacco 21 | KC aims to make 21 the legal age of sale of tobacco products in all of the roughly 100 municipalities in the Kansas City region. Proponents argue that stopping people from smoking at an early age should cut down on the number of lifelong smokers.

With a population of nearly 162,000 residents, Wyandotte County has about 8 percent of the population in and around Kansas City. The county is nearly as large as Overland Park and has more people than Olathe, with 128,000 residents.

Commissioner Mike Kane was the lone dissenter Monday among the five members of the Administration and Human Services Committee.

“You did have a good presentation, but I’m not interested in it,” Kane told the Tobacco 21 | KC representatives. “We are here to govern, not dictate.”

He said that members of the armed forces are under a lot of stress – even those who are younger than 21 – and that they should have the right to purchase cigarettes if that helps them relax.

But as a self-employed optometrist, Commissioner Jane Philbrook identified with arguments from the Tobacco 21 | KC representatives that smokers can hurt the bottom line. Productivity suffers when smokers go outside to have a cigarette, she said.

The Tobacco 21 | KC campaign also points to research estimating that increasing the age at which people can buy cigarettes to 21 around the country would only decrease tobacco retailer and industry sales by about 2 percent.

Brandau-Murguia and other campaign officials stressed that it’s not their intent to criminalize possession of cigarettes among older teens or even target people who might buy cigarettes for under-aged youths.

“It is not a gotcha game,” Brandau-Murguia said.

She didn’t rule out a move in that direction, though.

Brandau-Murguia said other commissioners likely share Kane’s sentiments but the limited scope of the proposed ordinance change could garner a majority on the full commission.

The region-wide campaign comes at a fortuitous time for the unified government, said Wesley McKain, supervisor of the Health Department’s Healthy Communities Division.

With the help of a Chronic Disease Risk Reduction Grant from the Kansas Department of Health and Environment, the health department has just hired a tobacco-reduction coordinator.

The new coordinator is providing staff support to a newly created Tobacco-Free-Wyandotte Action Team, which has joined the five other long-standing teams that are part of Healthy Communities Wyandotte. The unified government began the effort six years ago when it finished last among all Kansas counties in overall health outcomes.