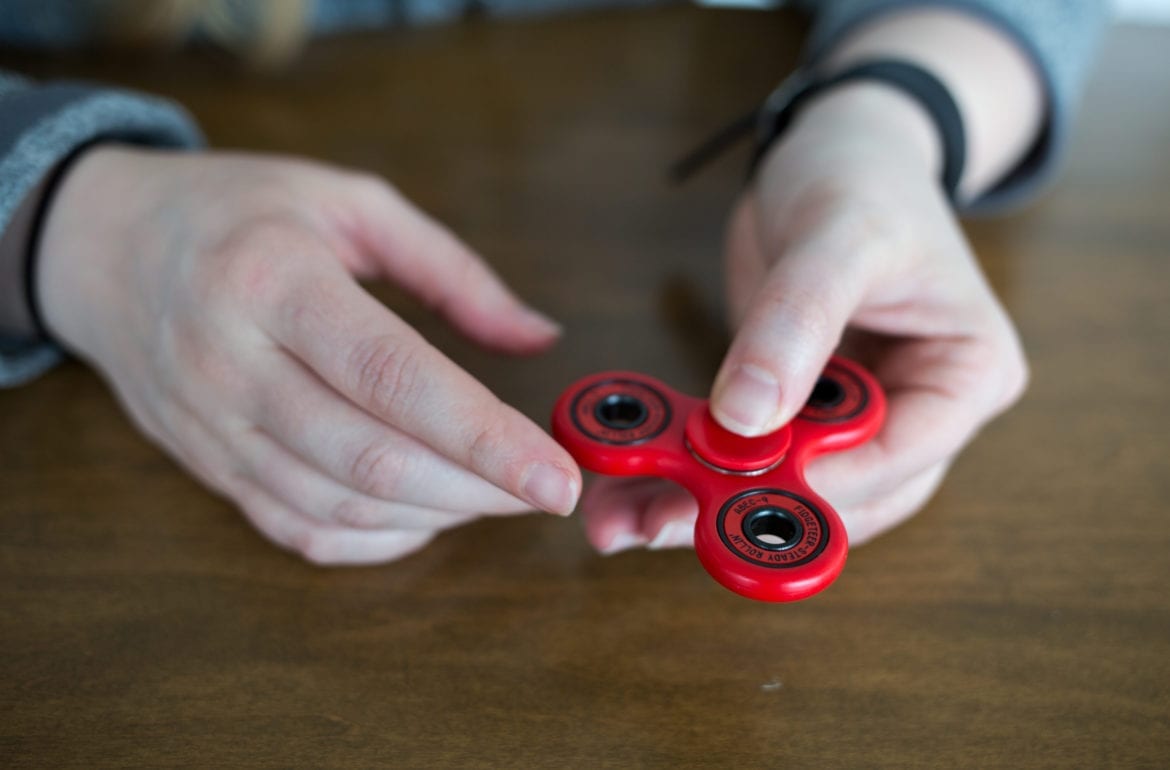 Fidget spinners come in different colors from a lot of different companies, but the basic one has three prongs centered around a circle with barrings in the middle. (Photo: Raquel Zaldivar)
Share this story

Fidget spinners — the trendy toy of the moment — are causing a commotion. A lot of kids love them, just as many teachers hate them and some people think they’re more than just toys.

The basic fidget spinner has three prongs centered around a circle with bearings in the middle. Take one prong, give it a spin and watch as the triangle shape becomes a blur, sort of like a ceiling fan. The toys are manufactured by several different companies, and sold all over the place — airports, gas stations, train stations, toy stores.

In many places where fidget spinners are sold, they’re touted as miracle toys that help people focus as well as aid people dealing with post-traumatic stress and other disorders, but one expert says those claims aren’t backed up by science. And some teachers have complained that the toys are causing disturbances in the classroom.

‘It just Adds to the Chaos’

While fidget spinners may seem simple and harmless, music teacher Elizabeth Maughan is not a fan.

“They do make a noise,” she says. “When you have 10 or 15 in a room, it’s just this whirring and it’s an irresistible siren call for everyone else to turn around and look at whoever has it out, and [it’s] completely distracting.”

Maughan teaches fifth and sixth graders in a school just outside Oklahoma City. She says the toys appeared there in the middle of April.

Fidget spinners got to be so much of a problem that Maughan’s school banned them.

And, her school isn’t the only one putting a stop to the spin, many others are prohibiting the toys in the classroom.

But some people are convinced fidget spinners are more than a just a distraction.

In fact, many retailers market the devices as a tool to help people focus, and help with controlling things such as PTSD, anxiety and attention deficit hyperactivity disorder. But according to Scott Kollins, a clinical psychologist and professor at Duke University, “there’s no evidence to support that claim.”

Kollins says that there’s been no research shown that proves fidget spinners are effective at addressing those issues.

“I know there’s lots of similar toys, just like there’s lots of other games and products marketed toward individuals who have ADHD, and there’s basically no scientific evidence that those things work across the board,” Kollins says.

According to the Centers for Disease Control and Prevention, as of 2011 as many as 6.4 million children between the ages of four and 17 had been diagnosed with ADHD.

Kollins says that because there is such a large number of children with ADHD, a lot of parents are searching for help, making them vulnerable to targeted — and potentially false — marketing.

“If their description says specifically that this can help for ADHD, they’re basically making false claims because these have not been evaluated in proper research,” he says.

Kollins says he hasn’t had parents or patients ask him about fidget spinners, yet, but he would rather they focus on some of the tried and true treatments.

“It’s important for parents and teachers who work with kids who have ADHD to know that there are very well studied and documented treatments that work, and that they’re out there, so there’s not really quick and easy fixes like buying a toy,” he says. “It’s important that people don’t get into trying these fads when we do have treatments that can help these kids.”