What Will It Take for Banks to Invest in Kansas City’s Low-Income Neighborhoods? 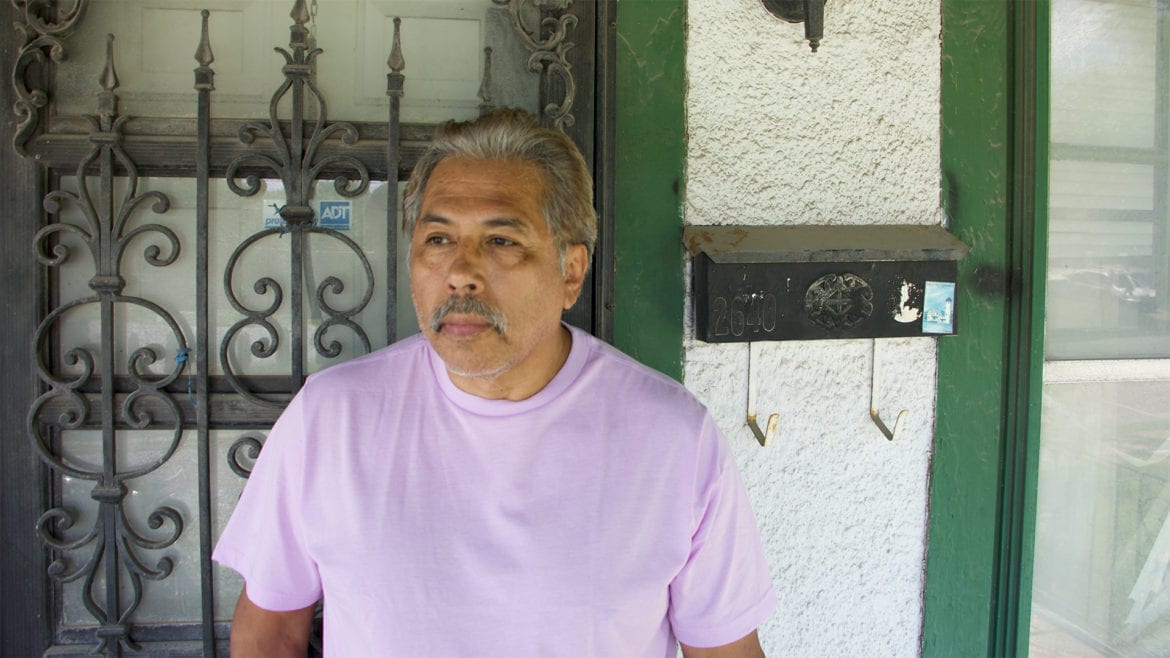 Tom Ribera stands in front of a house that he is rehabbing near Ninth Street and Gladstone Avenue in Kansas City, Missouri.(Jacob Douglas | Flatland)
Share this story

With just-dried paint on the walls, gleaming appliances in the kitchen and a few traces of sawdust still clinging to the newly laid floors, the small houses on the 5400 block of East 27th Terrace in Kansas City looked and even smelled like a fresh start.

While thousands of abandoned structures in Kansas City await a date with a demolition crew, these four had been redeemed and restored by a charity dedicated to improving neighborhoods and increasing home ownership.

But now what? A would-be homeowner with solid credit and cash for a down payment would be an unlikely house hunter in the Blue Valley neighborhood on Kansas City’s far east side. Once a bustling enclave for blue-collar families, it has struggled for decades with blight and abandonment.

On the flip side, hundreds of people around Kansas City are desperate for safe, stable housing. But they don’t have cash or credit to afford it, and both they and the neighborhood are too risky for most lenders.

“The vibrancy of our city at large is important to all of us.”

This is the conundrum found in big swaths of Kansas City as the June 18 election for mayor and City Council members draws near. While candidates speak often about eradicating blight and the pressing need for affordable housing, they rarely mention the longstanding reluctance of banks and other lending institutions to invest in low-income neighborhoods.

When good things happen, it’s often a result of efforts that have nothing to do with City Hall. On East 27th Terrace, four low-income Kansas Citians are thriving as first-time homeowners thanks to an unlikely partnership between a small Kansas City charity and a bank in Lenexa.

Tikkun first works out a payment plan with the people who move in. For about a year, they pay the charity a low monthly rent and build up their credit history. But the goal is for occupants to become homeowners. That’s where ANB Bank of Lenexa enters the picture.

ANB essentially acts as a mortgage lender, taking over the unpaid balance on the homes and working out a long-term payment plan with the occupants. As the seller, Tikkun receives a chunk of cash for its next project.

Brian Roby, bank president, describes ANB as a “small-to-medium-sized player” in the Kansas City market. He thinks it can have a bigger presence by doing good things.

“The vibrancy of our city at large is important to all of us,” he said.

ANB, like all banks, has an incentive to lend in an impoverished area like Blue Valley. By doing so it receives credit under the federal Community Reinvestment Act, which rates banks on their track record of actions that benefit low- and moderate-income neighborhoods.

For him, that means actually investing in impoverished areas, not simply sitting on nonprofit boards or donating to charitable causes. But in order for the investment to pay off, or at least break even, Roby has to do a lot of relationship building.

“I can’t emphasize enough how important it is to deal with a good operator,” he said. “There’s a lot of people out there who just want to buy something that’s cheap and rundown, and they want to get $500 worth of rent out of it until the roof caves in. We’re not interested in that kind of a borrower.”

The borrower he is looking for has experience, financial backing and an understanding of low-income neighborhoods. “It’s not for the faint of heart,” Roby said.

Myer checked all of Roby’s boxes. His finances are solid and so are those of Tikkun-KC, his nonprofit. He’s restored old houses as a business for 35 years. And he is fearless about going into the neighborhoods.

“I’ll walk a job site with Larry,” Roby said. “He knows people by their first names.”

Roby works with several borrowers in Kansas City. But projects take time, and the need is great. Borrowing money has long been a problem both for people who want to restore homes in low-income areas as a business and for would-be homeowners wanting to finance mortgages.

“I can get a bank loan if I put up my house and every other house and my firstborn child,” joked Tom Ribera, a remodeler and president of the Independence Plaza Neighborhood Association in northeast Kansas City.

He’s been in the business for a long time and is able to find investors to finance his projects in return for a portion of the profit once Ribera sells his restored vintage homes to people willing to take a chance on older neighborhoods.

“I’m always trying to put something together,” Ribera said. “Most of the banks don’t want to come in here.”

“The banks need to have some empathy for the neighborhoods.”

Part of the banks’ reluctance boils down to simple math, said John Wood, director of Kansas City’s Neighborhoods and Housing Services Department. Although houses can be obtained cheaply in many Kansas City neighborhoods, the cost of purchase and remodeling can easily exceed the appraised value of a property, making it a poor candidate for a loan.

Lenders can also be scared away by a drumbeat of bad news about certain areas of town. “A lot of negative press about crime and public safety and schools adds up,” Wood said.

About five years ago, the Federal Reserve Bank of Kansas City published a paper proposing that banks create “loan pools” to assist areas of town still reeling from the housing market collapse in the 2008 recession.

“Loan pools are finding success in cities ranging in size from Des Moines to Chicago,” the paper said. “A loan pool was recently started with three lenders in St. Louis, and proponents are exploring ways to develop one in Kansas City, Mo.”

They’re still exploring. Wood, who worked for several lending institutions and as a community affairs officer for the Federal Reserve before taking his job with the city, confirmed that discussions about a loan pool began in March 2012.

“We’ve been trying for years to pull it all together,” he said.

At this point, three banks have expressed willingness to put $1 million apiece into a fund to help low-income and first-time homebuyers obtain mortgages, Wood said. They have asked the city to act as a “subordinate lender” in cases when costs on a home exceed what banks would normally loan. In that position, the city would be the last to get its money back.

“We’re over 90% there,” Wood said. But even if the players finalize an agreement, approval by elected city leaders could present more challenges and take more time.

One tangible show of progress in recent months has been the creation of a “special improvement” loan pool for people wanting to get into the house rehab business in Kansas City.

The pool was created with $200,000 from local investors, plus a $105,000 donation from First Federal Bank of Kansas City, as part of a settlement of redlining complaints. The fund is managed by AltCap, a community development financial institution.

“There’s never been enough resources provided to the entrepreneurs who want to do development work,” said Davin Gordon, business development officer at AltCap.

Some of those entrepreneurs are now eligible for loans of up to $25,000 from the special improvement loan pool. AltCap has less stringent standards than traditional banks regarding credit scores and collateral requirements. It is working with several borrowers and looking for more.

“If the banks tell you no, we want to be able to tell you yes,” Gordon said.

While some loan and assistance programs offered by Kansas City attempt to build momentum by concentrating on up-and-coming neighborhoods such as Ivanhoe, Washington Wheatley and Santa Fe, social investment pool loans are available in 28 far-flung neighborhoods. That number includes Ruskin and Marlborough in south Kansas City and Blue Valley and its neighbors in far east Kansas City.

Getting capital into those lower-income areas can be measured in small steps right now. And small steps in the big picture are life-changing for people like the new homeowners on East 71st Terrace in the Blue Valley neighborhood, where an entire block has been given new life.

“You can’t change the world all at once. You have to do it one step at a time,” Roby said.

But as election time brings candidates into the neighborhoods, residents have expressed impatience with small steps, and politicians have echoed their frustrations. At a recent debate, mayoral hopefuls Quinton Lucas and Jolie Justus accused one another of moving too slowly on neighborhood and housing issues.

One big step that could speed up progress — getting banks and other lenders to act more willingly as partners — rarely gets mentioned.

The way Wood sees it, the banks, the city and the neighborhoods are engaged in a kind of standoff.