Most water in Kansas safe to drink 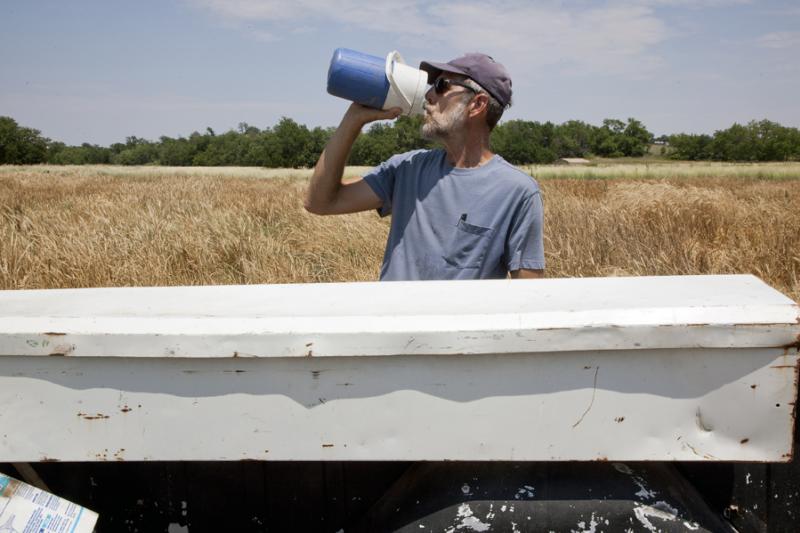 While about 96 percent of Kansans receive water from public water supplies that meet or exceed all state and federal regulations for clean water, some public water systems have one of more sources that exceed safe levels of contaminants. Photo by © Larry Schwarm
Share this story

The good news about the public water supply in Kansas is that almost all of it is safe to drink.

About 96 percent of Kansans receive water from public water supplies that meet or exceed all state and federal regulations for clean water, said Mike Tate, director of the Bureau of Water for the Kansas Department of Health and Environment.

“The vast, vast majority of Kansans are getting high-quality water,” he said.

All public water systems are required by law to supply clean and safe water to their customers, he said. Private wells are not held to the same standards, but Kansas has implemented progressive regulations for those who drill private wells that have significantly increased water quality, Tate said.

Yet about 120 of the state’s 1,011 public water systems are experiencing difficulty with one or more water sources that exceed safe levels of contaminants.

The most common challenge is treating nitrates, which are largely attributed to agricultural and landscaping fertilizers or animal waste from confined feeding operations.

Other naturally occurring contaminants of concern in Kansas include arsenic, uranium and selenium, Tate said. Some systems struggle with “disinfectant byproducts” caused by the reaction between chlorine, which is used to disinfect the water, and organic matter that isn’t otherwise removed in the treatment plant.

Increasing concern about uranium, selenium
Don Whittemore, a senior scientist at the Kansas Geological Survey at the University of Kansas in Lawrence, agreed that nitrates pose the biggest challenge to public water supplies.

“In places especially where the groundwater is at a shallower depth, it has been easier for fertilizers to reach the water table,” he said.

He also recently has been studying the effects of increasing concentrations of uranium, selenium and arsenic in the Arkansas River valley.

According to the U.S. Environmental Protection Agency, uranium can cause toxic effects to kidneys in humans and, over time, may increase the risk of cancer. Selenium can cause hair and fingernail loss and contribute to circulation problems.

“They have had to come up with a water treatment system that was quite expensive for the size of their community.” – Don Whittemore, a senior scientist at the Kansas Geological Survey, on the water supply in Lakin, where the groundwater naturally is high in uranium

The elements are naturally occurring in Kansas and eastern Colorado, where the Arkansas River flows, Whittemore said. Human actions such as irrigation and natural conditions such as drought can contribute to higher concentrations of the elements in drinking water supplies.

“They have had to come up with a water treatment system that was quite expensive for the size of their community,” Whittemore said.

Whittemore praised KDHE for its focus on preventing contamination of private wells, including regulations on the education of those who drill the public wells.

“Private water systems are better than they have been in the past,” he said. “Things in general have gotten better in terms of wellhead protection and well construction. What is going the other direction are the increasing nitrate concentrations that are working their way down in the aquifer.”

Safe water doesn’t always taste safe
Jerry deNoyelles, a professor of ecology at KU and a scientist at the Kansas Biological Survey in Lawrence, said many reported concerns about drinking water come from nontoxic sources.

“The average person will first detect some sort of taste or odor problem, usually an earthy taste or smell in their drinking water or in their shower, and they’ll call the water treatment plant,” he said.

That earthy taste or smell is caused by a chemical called geosmin, which the scientific community doesn’t believe to be toxic, deNoyelles said.

“Geosmin in and of itself is not really thought to be a health hazard,” he said. “But that’s what gets people thinking, ‘What’s really in my water?’”

Water treatment plant staff are “very aware” of the toxic chemicals that could be in the supply, deNoyelles said.

“All the safeguards are in place for the things you can’t smell and taste,” he said.

An area of increasing visibility is that of algal blooms in lakes and rivers. In the summer of 2014, an algal bloom in Lake Erie affected the water supply for the city of Toledo, Ohio. The city issued a “don’t drink, don’t boil” order for its residents, bringing in the National Guard to provide water during a hot weekend in August.

Algal blooms have affected numerous lakes in Kansas, deNoyelles said, including Cheney Reservoir, which provides about 60 percent of the city of Wichita’s supply.

“Wichita is particularly proactive in its treatment” of potentially toxic algae, he said. “Wichita as a community has invested a lot of money in water treatment, including treating the water regularly with ozone to get rid of those taste and odor issues. They’re some of the best people in the state to be on top of situations that might come up.”

Mike Tate, of KDHE, also complimented the leaders and employees at water treatment plants across the state.