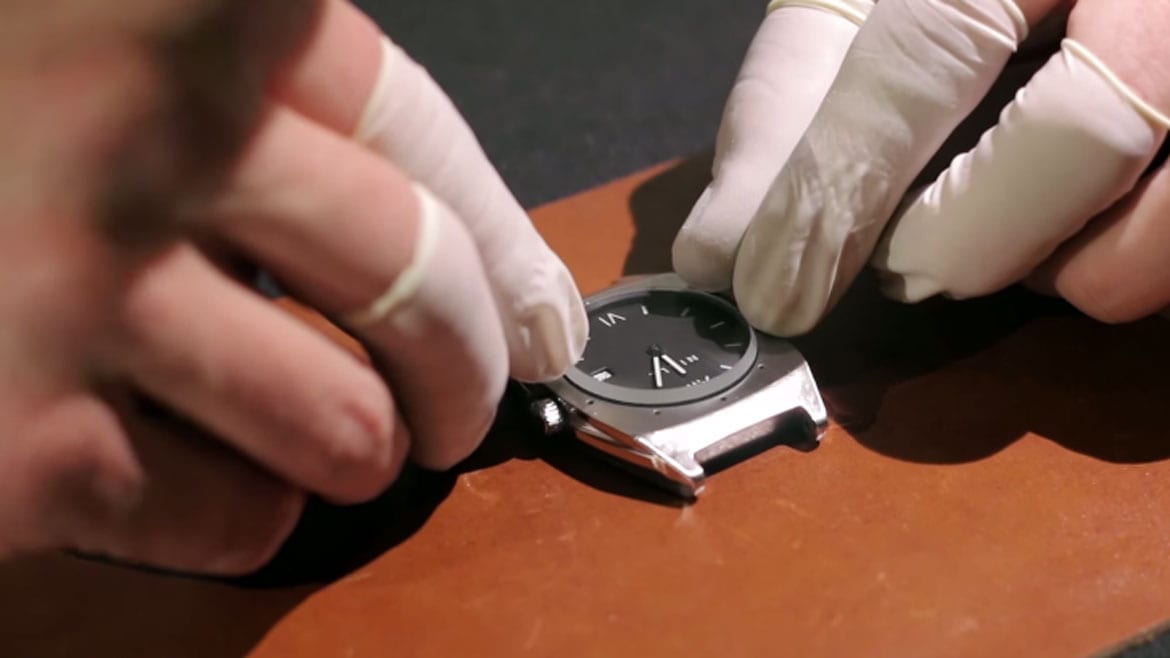 At Niall Luxury, watches like the one above are assembled here in Kansas City and by hand. However, according to the FTC that is not enough to be "Made in the USA." (Photo: Cole Blaise | KCPT)
Share this story

A recent investigation by the Federal Trade Commission (FTC) into the watch and timepiece industry’s use of the marketing slogan “Made In USA” focused extensively on local Kansas City watch company Niall Luxury, and Founder and CEO Mike Wilson isn’t thrilled about it.

The investigation by the FTC launched after Nicholas Manousos, vice president of the Horological Society of New York, wrote a blog on Hodinkee.com entitled “Smoke And Mirrors In The American Watchmaking Industry” and presented his findings to the commission.

While Niall manufactures every watch by hand here in Kansas City, their “movements,” the internal mechanism inside the timepiece that moves the hands, are made in Switzerland.

Apparently, there is a big difference between a watch being “assembled” in the USA, and “made” in the USA, a technicality Niall was forced to address. According to the FTC’s guidelines in order for a company to promote their product as made in USA “all or nearly all” of its components must be fashioned inside the nation’s borders.

In a letter to Niall’s lawyers, the FTC explained that even though the movements of Niall’s watches are small comparable to their overall US manufacturing costs, “the part is essential to the function of the watch” and “without it, cannot tell time.”

According to the letter from the FTC, Niall “implemented a remedial action plan to qualify its representations” and the investigation ultimately ended. However, Wilson is still fuming that his company’s reputation has been questioned.

Wilson talked to Flatland over the phone Monday morning and shared his thoughts about the investigation and how his company has been represented in the media.

What was your reaction to the FTC’s letter?

“Wow, this is great, you are really making my Monday. The FTC I am fine with. My biggest problem is the way this has been spun in the media. I appreciate you taking the time to call me, because, you know, the person who wrote that article, (Marketplace: The Slippery Slope of Made in USA Claims) never contacted me or asked me to comment.”

“If people actually take the time to go and read the actual FTC report, they will find out that Niall was cleared of all wrongdoing. We did not have to pay a single fine. It is unfortunate that a backdoor conversation between a blogger and the FTC became THIS, but Niall is being respectful, we are taking our hits on the chin, and in three months time, this will all go away. But we did nothing wrong, and I will add that the entire watch industry is being investigated, Niall was just the first. And again, if people would actually read the report they would find out that we were completely cleared of any wrongdoing. I also would like to add that we are the only watch company that has a transparency report on their website, so hopefully that shows who is being truthful and who is not.”

What do you mean about a “backdoor conversation”?

“This whole thing started when a guy (Nicholas Manousos) wrote a blog on Hoodinkie.com and then presented the FTC with a list of watch makers who were claiming to be made in the USA. Look, the FTC has to pursue a lead if there might be illegal activity taking place, so I am not upset at the FTC. It is just unfortunate that we got pulled into all of this. You know, everyone is a journalist these days, and everything is ‘fact’ and half the time, the facts are the furthest thing from the truth.”

What are some of the changes you will have to make?

“We’ll include “with Swiss movements” on our marketing. Again, it is just unfortunate that we had to be the first guy to take the shot, we had to spend a (ton) of money, we had to take the media’s (stuff), and ultimately we were never found of any wrongdoing. It’s unfortunate that this happened to our company when we are still very young and trying to grow and create something special. But again, I appreciate you calling because no one else has.”

KCPT’s Cole Blaise did a feature on Niall Luxury as part of the Show Me series in March of 2015 which highlighted the Kansas City based company’s manufacturing process. Watch below.

For the Planners and the Dreamers

A KC incubator for food and flavor

Show Me | The Lean Lab

KCPT's 'Show Me' team catches up with KC innovators

An entrepreneur, taking on a hidden need - the diaper gap