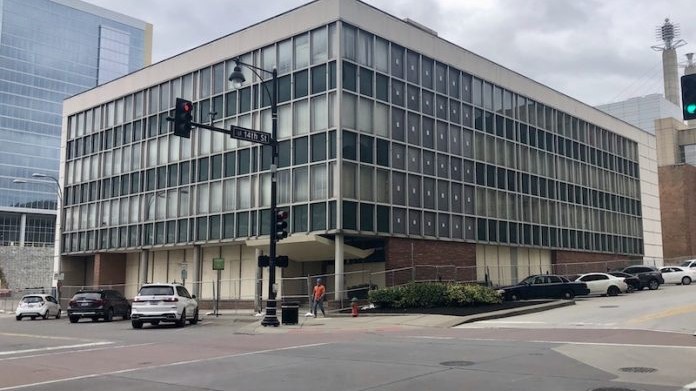 The block southwest of 14th and Baltimore is one of the finalists for the new Waddell & Reed headquarters, according to several sources. (Kevin Collison | Flatland)
Share this story

The hottest private development deal in recent downtown history, a $140 million high-rise project that would be the headquarters for 1,000 Waddell & Reed employees, is nearing the finish line.

The Enhanced Enterprise Zone Board today endorsed property tax abatement for the project. The recommendation now goes to the Kansas City Council for consideration.

During a presentation, attorney David Frantze, who represents the firm, said the project would include 250,000 square feet of office space atop a 1,000-space garage. The total structure, including garage, would be up to 15 stories in height. It would be completed by winter 2022.

Frantze estimated the city would gain a net $800,000 in earnings taxes the first year. He also told the board that Mayor Quinton Lucas supports the recommended tax incentive plan.

Two sites are finalists, according to several sources. One is a location at 13th and Grand long pitched by Copaken Brooks for an office development. The other finalist is property at 1400 Baltimore controlled by the Merriman family of Financial Holding Corp.

The proposed project would bring 919 jobs to Kansas City from across the state line from Kansas.

“This project will add to the skyline in Kansas City by creating a quality new construction high rise and increase the population of individuals working every day in downtown Kansas City,” according to a staff report to the EEZ board.

Sources say the company doesn’t plan to occupy either of the two major office projects currently in the works downtown, a 14-story tower planned by Platform Ventures at 13th and Wyandotte or the 25-story Strata project proposed for 14th and Main.

Instead, Waddell & Reed would sign a 15-year lease to occupy a new building that would be developed by another entity.

“The project…represents the opportunity for a new…office complex in the downtown area, which will be the first multi-story office complex to be constructed in almost 15 years,” according to the EDC staff report.

A spokesman for Waddell & Reed said the firm is close to making a final decision on the location for the new building.

“We’re still working through the process, the approvals and evaluating options at this point,” Roger Hoadley, vice president of communications, said in an email. “We anticipate making an announcement perhaps in early to mid-November.

The two sites that sources say are finalists are both next door to the Kansas City Power & Light District.

The Copaken Brooks property occupies much of the block at the northeast corner of 13th and Grand just north of the Sprint Center.

The firm has been pitching an office project for the property since 2006, when it won the development rights. It currently is a parking lot. The proposal has been described as a 525,000-square-foot development with half available for office space.

The development site at the southwest corner of 14th and Baltimore is currently occupied by what was known as the IBM Building at 1400 Baltimore and an adjoining garage at 117 W. 14th St.

The land was once pitched by DST Realty as a potential site for a convention hotel. It is now controlled by the Merriman family, a very low-profile major player in the Kansas City business community whose top executive is Michael A. Merriman.

There’s also a family connection to a potential deal. Joe Jack Merriman, Michael’s father, was president of Waddell & Reed in the late 1960s.

A visit to the 1400 Baltimore site this week revealed the buildings have recently been surrounded by fencing, an indication they may be preparing for demolition. The IBM Building, completed in 1957, and garage have been vacant for many years.

Backers of the “Project Decoy” plan are seeking local tax incentives, including property tax abatement and city economic activity taxes (EATS), to go along with a $62 million job incentive package from the state.

The tax incentive request was give a top rating from the city’s economic development review process because of the number of employees that would be relocated from Kansas, where Waddell & Reed is currently located, and their pay.

The staff report said the firm will initially bring 919 jobs with an average wage of $166,337. The firm also plans to hire another 120 full-time employees over the next six years with a total net new payroll of $172.8 million.

While the state and city effort to recruit Waddell & Reed from Kansas runs contrary to a recent “Border War” truce declared by the governors in August, the staff report notes the firm’s headquarters search was in play before that agreement was finalized.

“We are sensitive to and recognized the timing of this project relative to the border war legislation,” the report stated, “but this was a grandfathered project by the the state of Missouri and as such, staff feels we should view this the same way locally.”