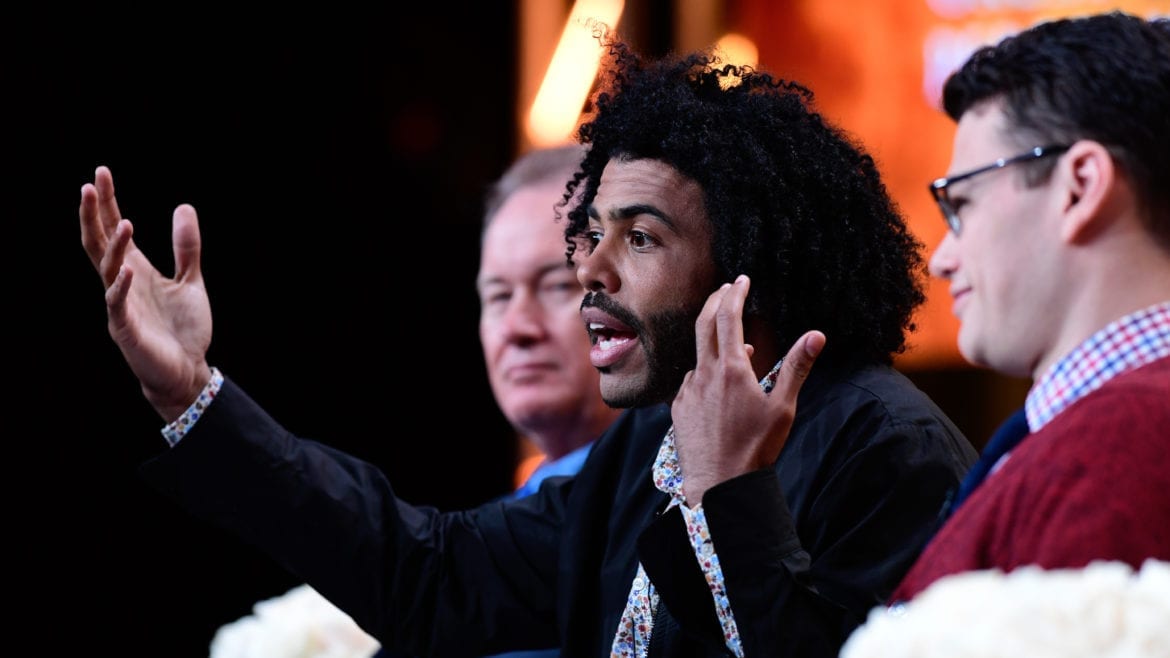 When we first learned that Great Performances would have a film about Hamilton, there were those who hoped it would be a full performance by the original Broadway cast that’s gradually been departing in recent weeks and months. It’s not; it’s a film called Hamilton’s America, and PBS presented it at the Television Critics’ Association press tour on Thursday, where its director, Alex Horwitz, was joined by Daveed Diggs, who just wrapped up his run as both Lafayette and Thomas Jefferson on Broadway. And despite the fact that it’s not a full performance, it made an impressive presentation.

In a videotaped message, show creator and star Lin-Manuel Miranda explained that Horwitz was a roommate of his who started following his process while he was still deciding exactly what form Hamilton would eventually take. Miranda also pointed out that he’s had a relationship with WNET’s Great Performances going back to his previous show In The Heights, and that his first job was at a WNET intern. It’s safe to say the station’s long relationship with him has turned into a good investment.

Critics had the opportunity to see an approximately 20-minute excerpt prior to the panel and then another couple of minutes to open the session, and the film turns out to be really three pieces in one. There are some performance excerpts from Hamilton with the Broadway cast. There’s also some fairly straightforward biographical material about Alexander Hamilton. But what appealed to me the most was that documentation of Miranda’s process, filmed well before it was complete. (You’ll hear him trying to perfect a few lines in “My Shot” that ultimately didn’t quite happen, for instance.) He’s already been expansively transparent about a lot of the influences in the book Hamilton: The Revolution, but seeing him writing and plotting in real time how to make the many pieces of the musical fit together is likely to be good stuff for the show’s many enthusiasts.

Of course, the panel comes at an interesting point for Diggs, who’s already been announced as an upcoming guest star on ABC’s well-regarded Black-ish and who appears in Baz Luhrmann’s splashy The Get Down. What came through as he talked about the experience was how rewarding it was, how fortunate he felt to be part of it, and how ready he felt to bring it to a close and do other things. “Eight shows a week is a particular grind and I don’t miss it,” he said, even as he talked about the folks working on the show being his closest friends at the moment.

One of the interesting things about the collision of live theater with other parts of pop culture, particularly for people who don’t care about Broadway normally (including Diggs, who said he didn’t care about Broadway himself until last year), is that its rhythms and customs feel strange if you compare them to, for instance, TV. A television show doesn’t begin with the understanding, in most cases, that after a year or two, even if (especially if?) the show is wildly successful, the entire cast will depart and be replaced by other people. People who follow television closely are used to thinking of mass cast turnover as a sign of trouble, either creatively or, at the very least, in terms of production. On Broadway, it doesn’t mean the same thing. It can just mean that … well, that eight shows a week is a particular grind.

That’s not to say, though, that Diggs doesn’t speak of the experience with awe and joy, because he does. That’s the point: moving on is a natural part of the cycle. The clip that was shown just before the session started covers, in part, the cast’s visit to the White House to perform in March of this year. In an interview, Miranda asks President Barack Obama for reflections related to “The Room Where It Happens,” the song in the show in which Aaron Burr talks about his longing to be nearer to the seat of power. “I’m in most of the rooms,” the president acknowledges. And Diggs told critics in the session that for him, the most iconic moment of the documentary — and clearly one of his most indelible memories — is Chris Jackson, who plays George Washington, singing “One Last Time” for President Obama against the backdrop of a portrait of Washington himself.

So no, it’s not a full performance of the show. But for fans of the show or for people who are curious about it, they’re trying to give you a lot about Hamilton and Hamilton.

Watch for “Hamilton’s America” as part of the PBS Arts Fall Festival beginning this October on KCPT.