US Treasurer Rios calls for greater economic equality and opportunity 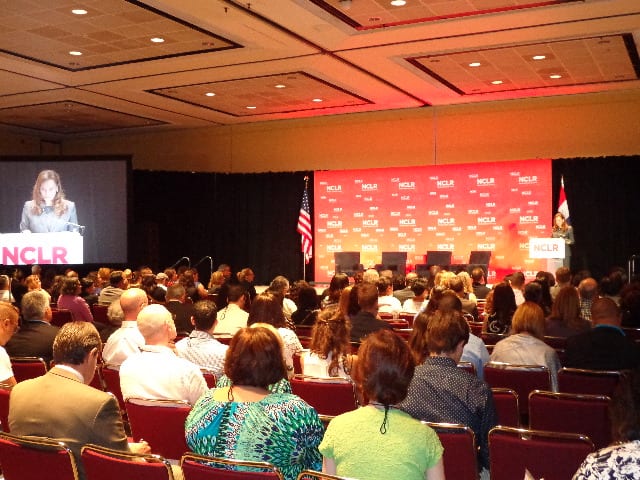 The poverty rate for Latinos is decreasing, but the continuing growth of income inequality is making economic advancement for Latinos difficult. That’s according to panelists speaking Sunday at the National Conference of La Raza (NCLR) in Kansas City. In a panel discussion titled “The Great Economic Divide, Why Inequality Matters,” the town hall meeting featured U.S. Treasurer Rosie Rios as keynote speaker.

In front of a gathering of about 300 at the Kansas City Convention Center, Rios spoke about how housing, income, investments and opportunities and how they impact the Latino community.

“Because I am the first person in the history of any administration to be the senior advisor to the Secretary of Community Development, these issues are near and dear to my heart, whether it’s job creation, or small business lending,” she said.

Rios stressed caution over optimism during her speech. While the economic landscape of Latinos is improving, she said, it is far from being fixed.

“Hispanics were the only group to experience a significant decline in their poverty rate in 2013,” she said.

“While this is welcome news, the poverty rate for Hispanics is still notably higher than its pre-recession levels, and significantly higher than the rest of the national average.”

“Since the New Market Tax Credit Program has begun, the program has created an estimated 350,000 new jobs,” she said.

Although not technically on topic, Rios concluded her speech talking about the $10 dollar bill redesign that she has spearheaded. The makeover would remove Alexander Hamilton’s image from the bill and replace it with a yet-to-be-determined woman. Suggested women so far have been Harriet Tubman, Betsy Ross, and Rosa Parks. Rios pledged she would see the $10 dollar bill overhaul come to pass.

“The last time a woman was on paper currency was 120 years ago,” she said. “It has been long enough.”

“The theme of democracy is to celebrate our differences. We need to see more women, more Latinos,” she said to cheers from the crowd.

Beginning with Cleaver, each panel member spoke for five minutes before opening up the town hall to questions. The former Kansas City mayor shared Treasurer Rios’ sentiments that while things are looking up for the Latino community, it is not time to be overly optimistic.

“There is no question that the U.S. economy is growing,” he said, “there is absolutely no question about it. But minorities are lagging behind. And worse, the wealth gap is actually widening.”

Cleaver also addressed the Fight for 15 movement here in Kansas City, which seeks to raise the minimum wage to $15 an hour. Cleaver, a supporter of the initiative, tried to put the minimum wage increase into perspective.

Addressing economic inequality, Cleaver addressed the issue with a famous saying about money.

Maria Pesqueira, whose work as an Alderman helped lead Chicago to raise their minimum wage recently, agreed with Cleaver. She called on the city council to approve the proposed legislation.

“We have got to raise the minimum wage,” she said.  “Latinos make 60 cents less an hour than everyone else,” she said.

Pesqueira said that a higher living wage for Latinos would help boost the economy because low-wage workers would put more money back into local businesses.

“Our (Latino) community is still a powerful community, with $1.3 trillion dollars of investing power. Imagine what we could be if more money was put into it,” she said.

Former New Mexico State Senator Martin Chavez opened his statements with remarks that addressed the wealth gap between the upper class and the Latino community.

Speaking on the wealth gap and economic inequality, Chavez stressed the lopsided economy was by no means an accident.

“We find ourselves today in this system of inequity, of inequality. It is by design. It is policy,” he said.

“It is dependent upon us, as Latinos, to say, ‘This is not fair. And we are not going to take it anymore,’” he said.

He called on the Latino community to advocate for economic equality through their actions.

The NCLR conference will continue through Tuesday, July 14. While Republican candidates are steering clear of the La Raza convention, Democratic presidential candidates Bernie Sanders, Matin O’Malley and Hillary Clinton were also on today’s schedule. All three hope to gain Latino support for their campaign and solidify the Democratic Party as the party that stands for Latino advancement. Republicans have come under fire recently in the Latino community largely because of controversial statements made by Republican presidential candidate Donald Trump regarding undocumented immigrants.

Our Community’s Day of the Dead Tradition