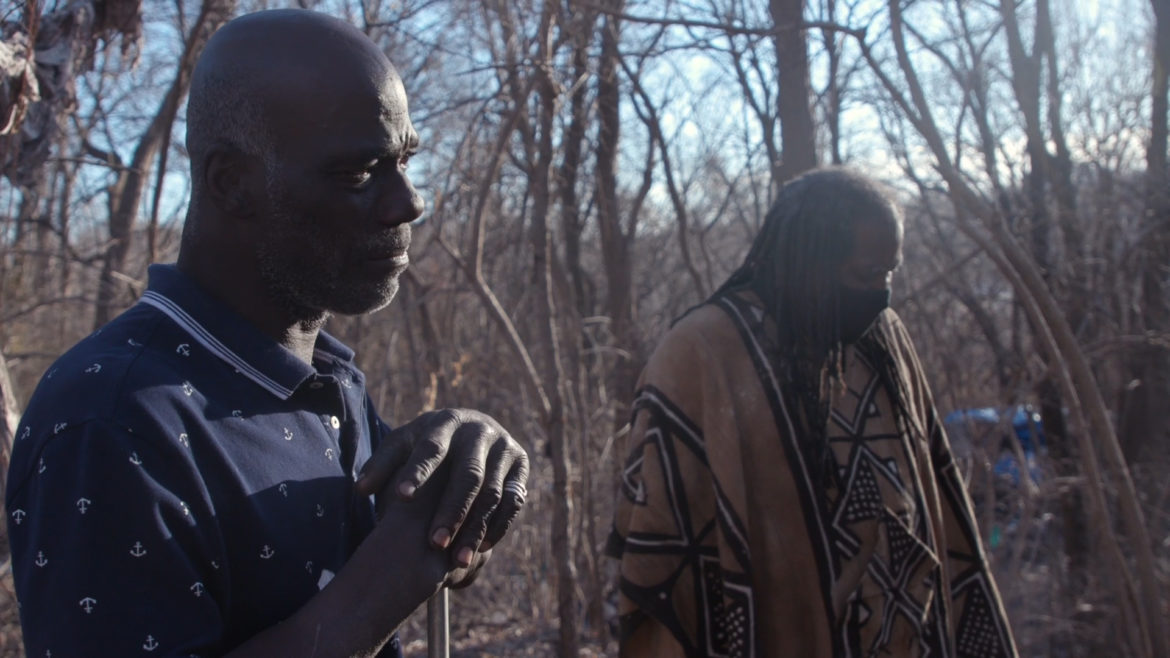 A year into the pandemic, people who are unhoused still face an uphill battle for shelter in Kansas City.

Some people were evicted and others are chronically homeless, but all of them have one thing in common: the need to find a safe place to live. Safe from COVID-19. Safe from the elements such as the cold snap that blasted the region in mid-February. And safe from losing belongings during sweeps of their encampments.

He knows. He experienced homelessness firsthand. After he was freed from prison he lived in his car. Understanding the struggle, he has dedicated himself to helping the unhoused community find secure housing and write legislative protections for people at risk of homelessness.

Shelby says the people closest to the problem are the people closest to the solution, which is why he helped create the Kansas City Homeless Union. Now occupying the front lawn at City Hall, Shelby and the union have presented itemized demands to the city. The demands include the reallocation of unhoused assistance funds to purchase homes from The Land Bank of Kansas City, contracted labor to build new housing for and by members of the union and a seat at the table for crafting solutions.

He’s not planning on going anywhere.

“Instead of folding, you know, we growing,” he said in a video, filming encampments in front of City Hall.

The pandemic has exacerbated the homeless crisis, according to the National Alliance to End Homelessness.

Over the past year, some organizations that aid the unhoused community were in dire financial straits.

Some shelters had to reduce the number of people they could serve to adhere to social distancing mitigation guidelines during the pandemic. For instance, reStart Inc. was forced to close a 90-bed shelter for single adults on 918 E. Ninth St.

Renee Kuhl, the LCS executive director, saw the need for additional housing, as well as temporary shelters, for people needing to quarantine. Last March, Kuhl said she was concerned for folks who didn’t have shelter or housing options, particularly those who need support for mental illness or disabilities.

People with mental illness or disabilities traditionally face extra hoops to jump through when they are seeking shelter or affordable homes. This is unnecessary, advocates say.

“When the pandemic hit, that was crystal clear. What I had been saying for six months before the pandemic only became more urgent when we went into lockdown in March of 2020,” Kuhl said. “At the coldest moment in February we were sheltering — across the community — 400 people in an emergency shelter and we still lost people … people still died of exposure (to COVID-19).”

As a result, people who find themselves unhoused pitch their tents wherever they can find space and create their own shelters. Small encampments have emerged around the metro, such as near Interstate 70 and The Paseo and Westport Road and Southwest Trafficway.

But if someone sees a camp and wants it removed, they call 311. After that, a ranger will inform the encampment that they have 24 to 72 hours to leave.

Amanda Kirsten, a social worker and advocate with Kansas City Homeless United, said she’s followed camp sweeps for a decade. In the last year, Kirsten said there were more than 400 calls that ended in displacement, eviction or a sweep.

People living in these encampments have learned to vacate quickly.

“They knew if they didn’t leave, they’d wake up at 6 in the morning with a dumpster and bobcat and lose everything,” Kirsten said.

In January, John Wood, director of the Neighborhoods and Housing Department proposed additional strategies to support the unhoused community. Under “Clean-ups/Transient camp,” the new proposal states: “No individual is moved without the opportunity to retain their personal belongings, usually with notice several weeks in advance.”

Wood also added that transient camp cleanups should be suspended during the winter months.

Even so, social workers such as Kirsten said sweeps happen “in the shadows.”

“We have these agencies and grassroots organizations going out and trying to just provide basic levels of needs,” she added. “If that’s getting swept two days later all we’re doing is terrorizing houseless camps and wasting resources.”

Homeless shelter leaders, housing advocates and some city leaders agree that this problem connects to inaccessible, unaffordable housing. This is why local advocates are pushing for Kansas City to create a comprehensive plan to tackle homelessness.

It hinges on a “housing first” model, developed by Dr. Sam Tsemberis, a psychiatrist-turned-housing advocate. Tsemberis, who is a psychiatry professor at Columbia University Medical Center, founded Pathways Housing First in 1992.

“We as a society are creating homelessness every single day because of the structural inequities in our social system,” Tsemberis said. “There isn’t enough housing inventory to end homelessness. … (It) was invented when we stopped building public housing.”

He said the pandemic focused a brighter light on the pre-existing need for housing first approaches to helping folks experiencing homelessness. Getting people safe and sheltered was concern number one, not their status of sobriety or mental health.

Conversations that Tsemberis had 25 years ago — about getting people secure housing no matter if they had a substance abuse problem or a mental illness — suddenly were brought to the fore.

Some cities reached out to local hotels to protect community members from the virus and the elements. When California secured 15,000 hotel rooms for emergency shelter it reaffirmed Tsemberis’ sentiment that the ability to immediately house people is possible when the political will exists.

“If we would have called (homelessness) a pandemic, we would’ve had everybody housed right away,” he said, chuckling. “And what the pandemic shows is you can do this in a large scale, you know, not build one little building or get 20 people off the streets.”

In Lawrence nearly 100 people have sheltered at local hotels since May. In Kansas City, all 28 rooms at a local hotel designated as temporary shelter are occupied.

This is why local leaders such as U.S. Rep. Emanuel Cleaver and Kansas City Councilman Brandon Ellington are supporting the push for affordable housing and funding for people who are unhoused. It needs to be more accessible, Cleaver has said.

Cleaver lauds the Veterans Community Project at 8900 Troost Ave., which builds tiny homes for veterans, creating a pipeline of support that gives unhoused veterans a leg up.

“They cost about $15,000 apiece if you get volunteers for the assembly. We can solve a lot of our problems,” Cleaver said.

In Kansas City, the Community Services League (CSL) employs the housing first method. Lynn Rose, CSL’s senior vice president, said that for the past seven years the organization’s programs have focused on helping people, many of whom have substance abuse issues, find secure housing.

However, Rose said there are barriers to accessing these programs.

“It can take years, especially in our programs, in order to be eligible for housing through permanent supportive housing, again, HUD-funded through the Continuum of Care,” she explained. “You have to be chronically homeless, which means you’re on the streets for at least a year, but most families that come to us have been there six, seven, 10 years.”

On top of needing to qualify as “chronically homeless,” the person would also need to have a condition that is defined as “a diagnosable substance abuse disorder, a serious mental illness, developmental disability, or chronic physical illness or disability, including the co-occurrence of two or more of these conditions,” according to the Department of Housing and Urban Development.

Some people can’t afford to go to the doctor or just don’t have access to health care. But a lack of diagnosis means some people are disqualified for assistance.

Experts point to the need to expand transitional and wrap-around services to better support community members. Consider what social workers see, for example.

“Fewer than 4 in 10 (of 156,000 families) will receive dedicated housing assistance to escape homelessness.”

Watson, who’s part of the local Point-in-Time Count and Housing Inventory Count team, said the city’s on track to count more than 400 people living outside. Because the unhoused population is transient, however, Watson suspects they “grossly undercount the number of people experiencing homelessness.”

Watson noted many of the people she encountered had been evicted.

There was something else about this year’s count, Watson said, adding: “We actually are asking people if their homelessness or their housing crisis is related to COVID-19.”

“This is a human problem,” Watson said. “Each person that we’re counting has a story and they belong somewhere and they came from somewhere. … It’s incredibly traumatic. It hurts to see people living this way.”

So the people who are experiencing the homelessness crisis increasingly are organizing to advance their cause. The Kansas City Homeless Union is standing up for better financial support, to be consulted with, and to have a say in where government funds go.

“The homeless do not get heard. Everybody speaks for the homeless. Let us deal with our problems,” Shelby said at a public hearing on Feb. 27. “We’re tired of dying and we ain’t going to let you keep killing us with your decisions.”

New moratorium, through Oct. 3, covers about 80% of U.S. counties

Nick's Picks | Mask On, Mask Off Debate in Days Ahead of Garth Brooks Concert

‘I’m Gonna Lose it All’: Tenants Left in the Dark as KC’s Rental Assistance Program Closes to New Applicants

Tenants who already applied for assistance are still waiting for help, and local nonprofits face challenges in processing applications quickly