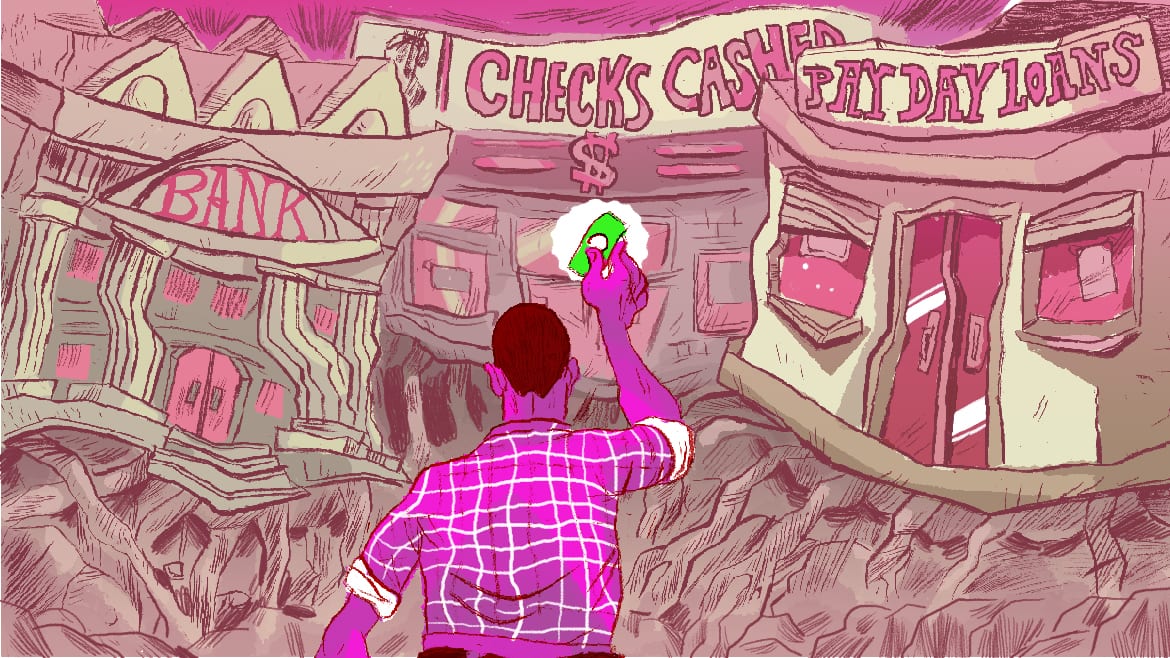 LaJua Manning works 40 hours a week, and sometimes more than that. She’s a certified nursing assistant, working nights to take care of bedridden patients. Still, she struggles to make ends meet for her and for her two-year-old daughter.

When the paychecks do come in, Manning doesn’t deposit them in a bank. In fact, she doesn’t use a bank at all. “I’d prefer to stay away from them altogether,” she said.

Manning is part of what the financial industry calls “the unbanked.” They are people who don’t put their money in traditional institutions like banks and credit unions.

Kansas City’s total unbanked population has grown 4 percent since 2009. In St. Louis, that number has fallen 3 percent in the same period.

So, Where Does the Money Go?

Mario Urquilla is the vice president of community development at Enterprise Bank and Trust. He works with low and moderate income people, many of whom are or have been unbanked. There are several different ways that people who don’t use a bank manage their money, he said.

First, there’s check cashing. Some people take their paychecks directly to a check casher or to Walmart, paying a small fee to turn their paycheck into dollars. Walmart usually charges $3 per check cashing transaction. For many of Urquilla’s clients, this is a reasonable solution.

“If I don’t have a bank account and my employer hands me a check, a $3 fee at Walmart is better than some of the banks,” he said.

Aside from paycheck income, sometimes people need a little extra money to get by, Urquilla said. It’s usually a few hundred dollars to fix a car, or to pay a medical bill, or to fix a leaky roof. But, according to Urquilla, big banks just don’t provide small personal loans anymore because it’s not profitable.

“So, how do those folks who just need a few hundred dollars get access to funds?” he asked. “We know what’s been created from that supply and demand is payday loans.”

Missouri ranks second-highest in the nation for the utilization of payday loans, according to a 2012 study by the Pew Foundation.

“The system exists to fill a need, but it exists in a way that it’s almost impossible for the people they’re targeting to actually be able to recover,” Urquilla said.

Kansas City Mayor Sly James recently signed a symbolic pledge against payday loans. “We have to do something about this,” he said.

Channa Navarro is a financial coach at the Women’s Employment Network. Many of her unbanked clients don’t want to use a bank because they don’t think they have enough money, she said. While some banks offer free checking, others charge fees for low balance.

“They haven’t had enough income,” she said. “When you don’t have enough to make it, you’re not going to feel like you have enough to justify a bank account.”

But, she said, it goes both ways: “No bank really wants clients that can’t keep $10 in their checking account,” she said. LaJua Manning and her 2-year-old daughter.

That’s what happened with LaJua (LA-jew-uh) Manning. She has used a bank in the past, but found it confusing. She said she never really understood the fees, and now owes the banks somewhere between $200 and $500. She said she’s not even sure why she owes the money.

“You’re more broke when you put your money in the bank,” she said. “I feel like they take out for this and that.”

She thinks she should be in control of her money, not the bank.

What’s Behind the Numbers?

For both Navarro and Urquilla, financial education is key to getting more people involved in the financial system.

“For some kids, walking into a bank is as foreign as seeing a cow,” Urquilla said. “For some kids, the three blocks between their home and school is all they know.”

As the son of immigrants from El Salvador, Urquilla didn’t see much of the financial world when he was growing up.

“Banking was this foreign world to me,” he said. “I’d drive by banks and it seemed like this place where everybody wanted to be, but nobody in my realm really was.”

He feels that financial education could have been a game-changer for his family. That’s why he’s dedicated his career to educating young people about the financial system.

“If my mom had known just a little more, and had shared that with me, it would have made a huge difference in my life,” he said. “So, if I can get in front of students and let them know if a bank’s not on your radar, it’s gonna be really tough for you to go anywhere.”

Physical access to a bank is part of the problem. In fact, some people like Sarah Pickrell think that “bank deserts” exist in Kansas City. She’s a financial coach at Catholic Charities. She lives east of Troost, the city’s notorious dividing line between historically white and black neighborhood. She said she sometimes wonders why she doesn’t see more banks in her own neighborhood.

“You don’t find banks on every corner over there,” she said. “I know even when I’m looking for a bank on my way home from work, and my bank has many locations, it’s so hard to find one sometimes.”

Mike Hagedorn, CEO of Kansas City-based UMB Bank, had not seen the FDIC’s statistics on the unbanked in Kansas City before the Hale Center for Journalism showed them to him. But, he said he thinks UMB is doing its best to provide banking services to the whole city.

“I know what our coverage is, and I feel that our coverage is good,” Hagedorn said. “I’m sure there’s a neighborhood that would say, ‘But we don’t have a UMB branch right down the street.’ But it’s not that simple, just to say there’s a hole there.”

The following map shows all of the Bank of America, Commerce Bank and UMB Bank locations in the Kansas City metro, including ATMs. The addresses come from the banks’ websites. These three banks were chosen because they are the top three in local market share deposits, as of June 2014. It does not include locations of any other banks.

In fact, some people think the lack of access to banks in some parts of Kansas City has caused a disparity in the number of unbanked between white households and black households.

“I would speak to the history of Kansas City, if I’m being perfectly frank,” Urquilla said. “This has been a city with deep-seeded roots and trouble, whether it’s the Troost line that you want to look at, or whatever the case may be.”

Just four hours east in St. Louis, though, only 13 percent of black households are unbanked, and the percentage has fallen by 18 percent since 2009.

Alex Fennoy, co-chair of the St. Louis Regional Unbanked Task Force, credits that improvement in part to the group’s efforts. But, he said some families have built up a mistrust of banks over time.

“If your grandmother, mother, father, aunts, uncles were never banked and all you’ve seen was going to get money orders to pay bills, that’s what you’re going to do,” Fennoy said.

Urquilla sees this scenario reflected in many of the young people he works with. And when he does, he puts them on the spot.

“Typically, my response is, ‘So are you going to be content living where your grandma lives and living the same life that your grandma lived? If you expect your life to be any different, then you’ve got to do something different. And one of the biggest differences people can make is knowing how to use banks appropriately,’” Urquilla said.

Helping people get involved in traditional banking is difficult because most people are unbanked by choice.

There is no one-size-fits-all solution, but there are groups in Kansas City working to fix the problem.

Next Step KC is a nonprofit that encourages financial services for low- and moderate-income families. It provides free tax prep, and also guarantees small-dollar loans from bank partners. Urquilla, who is the executive director of the nonprofit thinks the small-dollar loan program helps fill the gap left by banks.

UMB is one of the program’s bank partners. Hagedorn said working with Next Step KC makes business sense for the bank.

“It’s awfully hard to make money on loans that are a couple hundred dollars, so when you do that through a nonprofit, when you’re vetting it, you’re taking all those fixed costs out of the bank and it can be profitable for us,” Hagedorn said.

Some employers are loading paychecks directly onto prepaid debit cards, which is sort of a gateway to the banked world.

This is what LaJua Manning does. Her agency deposits her paychecks directly onto a prepaid debit card. It’s easier than working just in cash, she said.

In St. Louis, an initiative called Bank-On Save-Up grew out of the St. Louis Regional Unbanked Task Force. It’s a partnership between 18 financial institutions and 42 other community partners. The goal is to provide low and moderate income St. Louis families with access to affordable financial services.

Having so many organizations involved in the effort has lowered the percentage of unbanked people in St. Louis, Fennoy said. Similar efforts in Kansas City haven’t yet borne fruit.

“Building a partnership in the beginning is really where all of our success comes from,” he said.

The FDIC has an initiative called the Alliance for Economic Inclusion (AEI) that addresses the unbanked problem with community partners.

The group’s Kansas City branch says it plans to “significantly reduce the unbanked population by the year 2020.” Their next meeting to discuss the plan is at 8 a.m. Aug. 19 at the Plaza Library.

Voices and portraits from workers getting by in KC

Tags: Getting By in KC