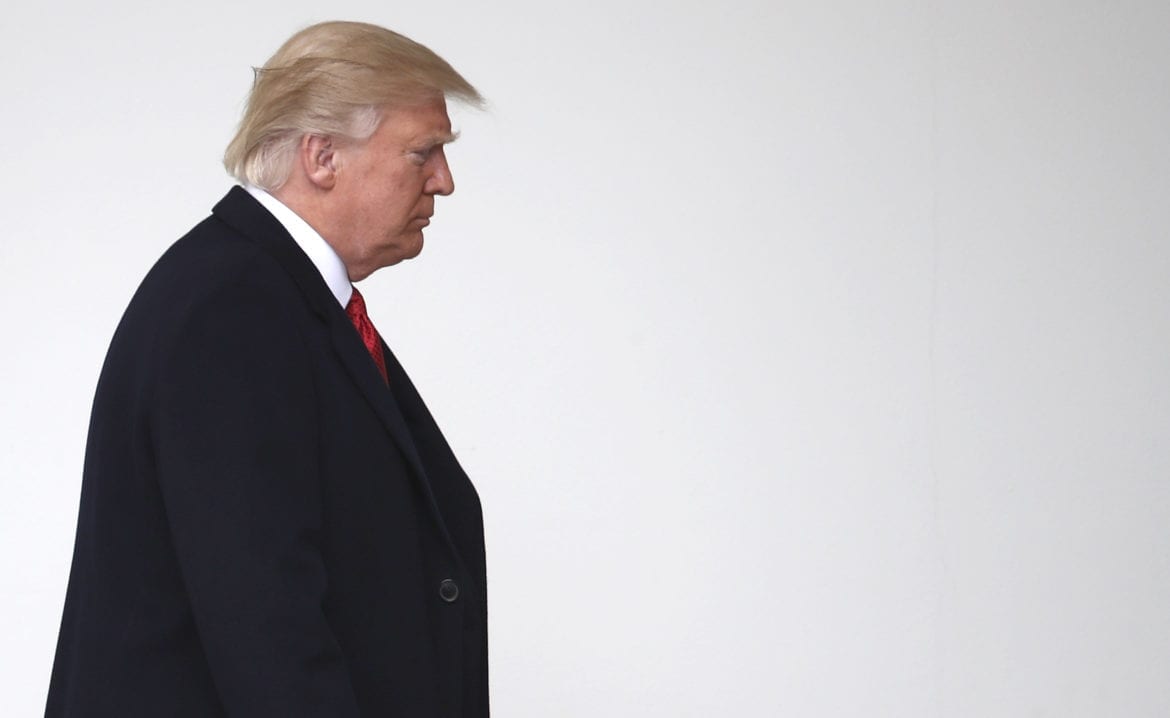 President Trump released his budget blueprint on Thursday, calling for a boost in military spending and deep cuts in the Environmental Protection Agency and other programs. (Photo: Win McNamee)
Share this story

The Trump administration’s new budget blueprint aims to quantify the president’s nationalistic agenda in dollars and cents. The plan, released Thursday morning, calls for significant increases in military and border-security spending, along with corresponding cuts in many other parts of the government.

The blueprint was designed to “send a message to our allies and our potential adversaries that this is a strong-power administration,” Office of Management and Budget Director Mick Mulvaney explained on Wednesday as he previewed the document in a briefing with reporters.

It also sends a clear message domestically: This administration is willing to make drastic, controversial cuts to fund that “strong-power” message. That includes slashing spending on foreign aid and the environment, as well as long-standing programs aimed at boosting the arts and humanities, as well as the fortunes of the most vulnerable Americans. The question now is how much the Republican-controlled Congress will go along with that vision.

Like any White House budget, Trump’s blueprint is more of a political document than an accurate predictor of government spending. Congress controls the purse strings and lawmakers may have very different priorities. As a statement of presidential intention, though, the blueprint is crystal clear.

“This is the America First budget,” said Mulvaney. “In fact, we wrote it using the president’s own words. We went through his speeches. We went through articles that have been written about his policies … and we turned those policies into numbers.”

Trump wants lawmakers to boost military spending in the coming fiscal year by 10 percent, or $54 billion. Rather than raise taxes or increase the deficit, the president is calling for equivalent cuts in other areas. Foreign aid would be especially hard hit, with the State Department’s budget cut by about 28 percent.

Alongside Defense, the agencies for which the White House proposes spending increases are almost entirely military- and national security-related. The Department of Homeland Security would see a hike in funding of 6.8 percent, as would the Department of Veterans Affairs (5.9 percent) and the National Nuclear Security Administration (11.3 percent).

“The president ran [his campaign] saying he would spend less money overseas and more money back home,” Mulvaney said. “When you go to implement that policy, you go to things like foreign aid, and those get reduced.”

Critics argue the administration’s single-minded focus on hard power is short-sighted, and could ultimately be detrimental to national security. They point to past comments from Defense Secretary James Mattis, a retired Marine general, who once told lawmakers, “If you don’t fund the State Department fully, then I need to buy more ammunition, ultimately.”

The White House blueprint does not address major safety net programs such as Social Security and Medicare, which the president has promised to protect. But Trump is calling for sharp cuts in discretionary spending, including the Environmental Protection Agency.

The budget says that slash in funding is necessary “to ease the burden of unnecessary Federal regulations that impose significant costs for workers and consumers without justifiable environmental benefits.”

Instead of carrying out many of its current functions, the agency would “primarily support States and Tribes in their important role protecting air, land, and water in the 21st Century,” the document adds.

The EPA’s new administrator, Scott Pruitt, is a longtime critic of what he sees as the agency’s activist agenda. He and the president have both promised to scale back environmental regulation, including efforts to curb carbon pollution and promote alternative energy. Last week, Pruitt reiterated his doubts that carbon emissions are a primary contributor to climate change. That puts him at odds with the overwhelming scientific consensus.

Climate research at NASA could also take a hit under Trump’s budget. The plan would reduce overall spending at NASA by around 1 percent, Mulvaney said, but would increase spending on space exploration, which Trump supports.

In addition, funding for the National Institutes of Health would fall by 18 percent, or $5.8 billion. That cut involves “a major reorganization of NIH’s Institutes and Centers,” including closing some of those centers, “to help focus resources on the highest priority research.”

In a speech to a joint session of Congress last month, Trump promised to bring renewed hope and opportunity to what he called “our neglected inner cities.” The Department of Housing and Urban Development will not be the vehicle for that effort, though.

“We’ve spent a lot of money on housing and urban development over the last decades without a lot to show for it,” Mulvaney said. He added that Trump prefers to invest in cities’ infrastructure and school choice.

The president’s plan calls for a 6 percent increase in spending by the Department of Homeland Security, including $2.6 billion to begin work on a planned border wall. The White House is also asking Congress to devote $1.5 billion to the wall in the current fiscal year, which ends Sept. 30.

Trump also wants to eliminate funding for the Corporation for Public Broadcasting, which helps to finance public radio and television stations. CPB received $445 million in the current fiscal year.

Several of these eliminated programs aim to help the poorest Americans. The Low Income Home Energy Assistance Program (LIHEAP) helps people pay utility bills and weatherize their homes. And the Community Development Block Grant, a part of HUD, helps support affordable housing and infrastructure (among many other things).

The budget also proposes eliminating the Appalachian Regional Commission, which promotes economic development in the region stretching from northern Mississippi to western New York. Many counties in that swath heavily supported Trump in November.