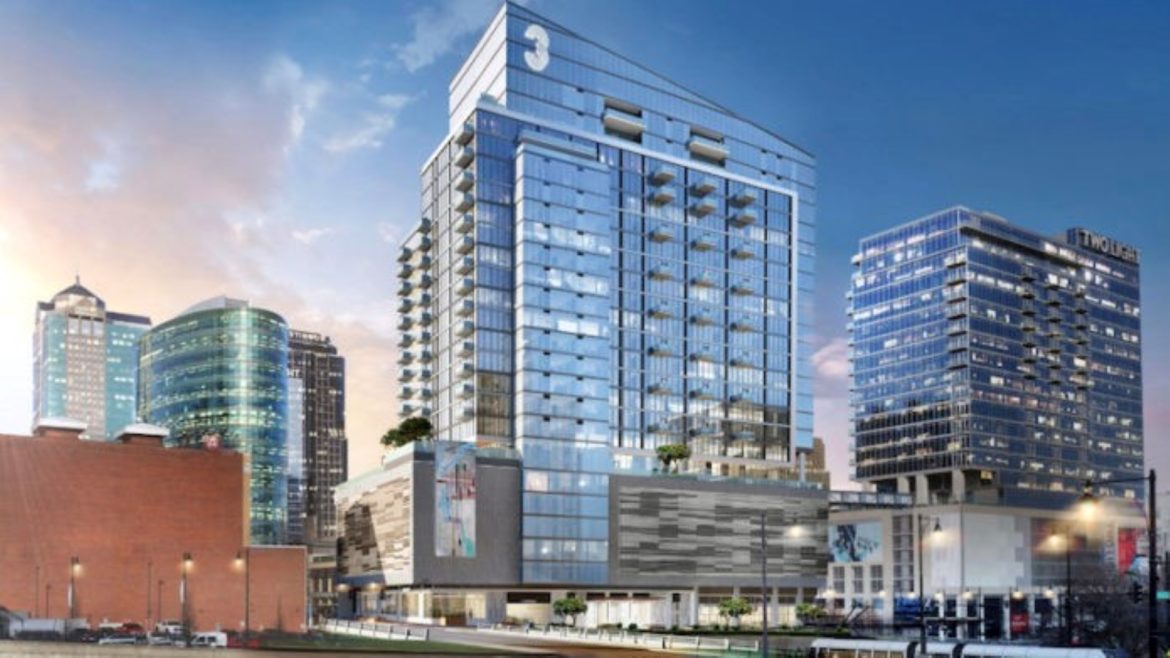 The Cordish Co. has confirmed construction of the $140 million Three Light luxury apartment tower will begin in May, adding the renovation of the historic Midland building into affordable apartments is expected to begin this fall.

CityScene reported a month ago that J.E. Dunn, the contractor for the 26-story tower, had obtained a street closing permit beginning May 3. The official announcement comes three years after the City Council approved tax incentives for the redevelopment plan.

“We are extremely excited to commence construction on Three Light and The Midland Lofts … a sign of new growth and energy downtown following an incredibly challenging year,” Nick Benjamin, executive director of the Power & Light District, said in a statement.

Three Light will occupy what is now a parking lot at the northeast corner of Main Street and Truman Road and will be connected to the Two Light apartment tower across Walnut Street by an eighth floor skybridge.

It will allow residents of both buildings to share social amenities including an infinity pool, outdoor spa and an indoor/outdoor party space and bar.

The Three Light architect is Hord Coplan Macht of Baltimore, the same firm that designed Two Light. The Three Light project will include a 472-space garage and 7,600 square feet of retail space on the first floor.

The Three Light project is expected to be completed in May 2023, according to a press release announcing the construction start.

The $25 million renovation of the historic Midland Building into 139 apartments that were described as affordable was part of a deal struck with the City Council in 2018 to win approval of the tax incentive package for Three Light.

While the city is obligated under the 2004 Power & Light District redevelopment agreement to financially assist Cordish with its apartment projects, the negotiation for the deal that helped build Three Light was a contentious affair at the council.

The council ultimately approved a 25-year property tax abatement and $17.5 million in cash to build the project’s 475-space garage, but included a requirement that Cordish develop affordable housing in the historic Midland Building at 1221 Baltimore Ave.

“We are eager to bring the historic Midland building back to life as Midland Lofts,” Marnie Sauls, executive director of residential management for Cordish, said in a statement.

“The residential renaissance of downtown Kansas City began with historic conversions and we think it is fitting as we begin this next phase of the renaissance that at we are adding both high-rise new construction and a historic renovation.”

Rents for apartments in the Midland Lofts will begin a $700 per month. All units in the building will be available to renters making 80% or less of the  area median income, according to the release.

The Midland renovation project is being designed by Helix Architecture + Planning and is expected to have a similar level of finish to the luxury towers developed by Cordish, according to the release.

The Midland renovation is expected to begin the third quarter of this year and be completed in late 2022.

Cordish officials have said previously the new Three Light tower is expected to seek monthly rents ranging from $1,400 for a studio up to $7,000 for a penthouse club apartment.

The Cordish press release stated the One and Two Light buildings have remained 95% occupied during the pandemic.

A potential Four Light apartment tower is contemplated on a parking lot on the west side of the now-closed Alamo Drafthouse Cinema.

Officials at B&B Theatres of Liberty are in negotiations with Cordish to reopen the former Alamo space in the historic Mainstreet Theater as a B&B operation.

Flatland contributor Kevin Collison is the founder of CityScene KC, an online source for downtown news and issues.

About $600 Million in Rental Assistance Coming in Kansas, Missouri

Help Getting the Rent Paid