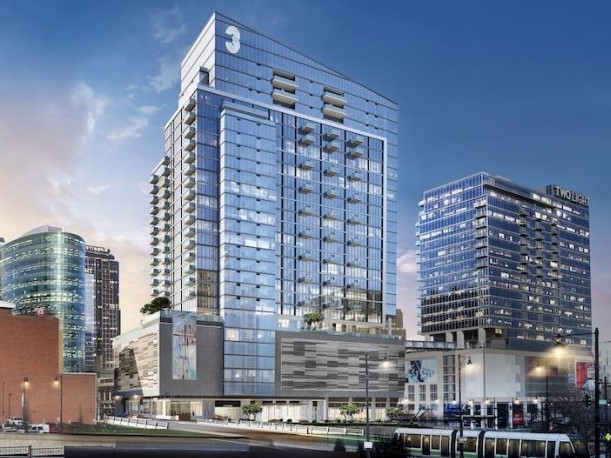 A view of Three Light from the south. (Courtesy | Arnold Imaging)
Share this story

Construction of the long-awaited Three Light luxury apartment tower at 15th and Main streets is set to begin by early summer. Completion is expected in late 2023.

The Cordish Co., which won city approval in 2018 for the incentive package for the $150 million project, has submitted its final drawings to City Hall. Cordish has hired J.E. Dunn Construction to build the 32-story tower.

Monthly rents at the 321-unit project are expected to push new heights as well, ranging from $1,400 for a studio up to $7,000 for a penthouse club apartment.

Nick Benjamin, development director for Cordish, is confident the new apartment building will do well in the marketplace.

“Since we started construction on One Light (in 2014), close to 10,000 apartments have been built downtown,” he said. “It’s been a period of rapid residential growth. Rents have grown and velocity hasn’t come down.”

The design of the new Three Light tower has been adjusted so that it is narrower and taller than Two Light.

“We wanted to differentiate the massing of the building from Two Light,” Benjamin said. “That south side of the Power & Light District is such an important part of the skyline.

“We want it to make the buildings welcoming and not blocking energy and visibility.”

There are 29 levels of apartments with a glass “fin” above that adds another three levels for 29 penthouse units.

A skybridge over Walnut between Three Light and Two Light at the eighth floor also is part of the development.

The skybridge will allow residents of both towers to share their buildings’ social amenities – including an enhanced theater room, infinity pool, outdoor spa, hot tub, entertainment kitchen and indoor/outdoor party space and bar.

A second, larger infinity edge pool at Three Light has been designed to cantilever above Main Street.

“When you’re on Main Street riding the streetcar you’ll be able to see into the pool,” Benjamin said.

The building also will continue Cordish’s salute to Kansas City entertainment and sports legends that has been part of the decorative flourishes at One and Two Light.

The screen of the 476-space garage at the base of Three Light has been designed as a set of abstract art murals that pay tribute to Kansas City jazz greats Charlie Parker and Count Basie.

On the south and east facades, a gradient from white to black was used to evoke Basie’s piano keys. On the west facade, brassy tones will honor Parker’s saxophone.

Digital visualization software was used to convert the audio of two of the artists best-known compositions, Parker’s “Ornithology” and Basie’s “Moten Swing” into large graphics that register changes in musical pitch and volume over time, according to Cordish.

Benjamin added that the mural of Kansas City entertainers on the side of one of the Power & Light District buildings that will be obstructed by Three Light’s construction will be reproduced as well, with some updates.

The lower level of the garage will have 75 parking spaces reserved for Power & Light patrons.

The Three Light architect is Hord Coplan Macht of Baltimore. The interior designer is Rebecca Jones of Baltimore and Washington D.C.

With the completion of Three Light, Cordish will have added 924 apartments to the entertainment district that began opening in 2007. An estimated 1,350 people will be living there.

“The District has been in an unmitigated positive run and now with the new office construction and convention hotel, there’s a lot to be excited about,” Benjamin said. “Our only risk now is construction pricing. One Light cost $80 million, Two Light was $120 million and Three Light will cost $150 million.”

In related news, Benjamin said the renovation of the historic 12-story Midland Building into 117 affordable apartments is expected to begin before the end of the year. That project should be completed by late 2021 or early 2022.

The 117 units are intended to meet the affordable housing goal of not only Three Light, but potential Four and Five Light projects as well.

Historic Board of Education Building is Being Demolished

City Plan Commission to Consider Project in May

Age of Coronavirus: Developers Leave the Light On for Downtown Hotel Projects

Hospitality Industry 'Kicked in the Teeth' by Pandemic