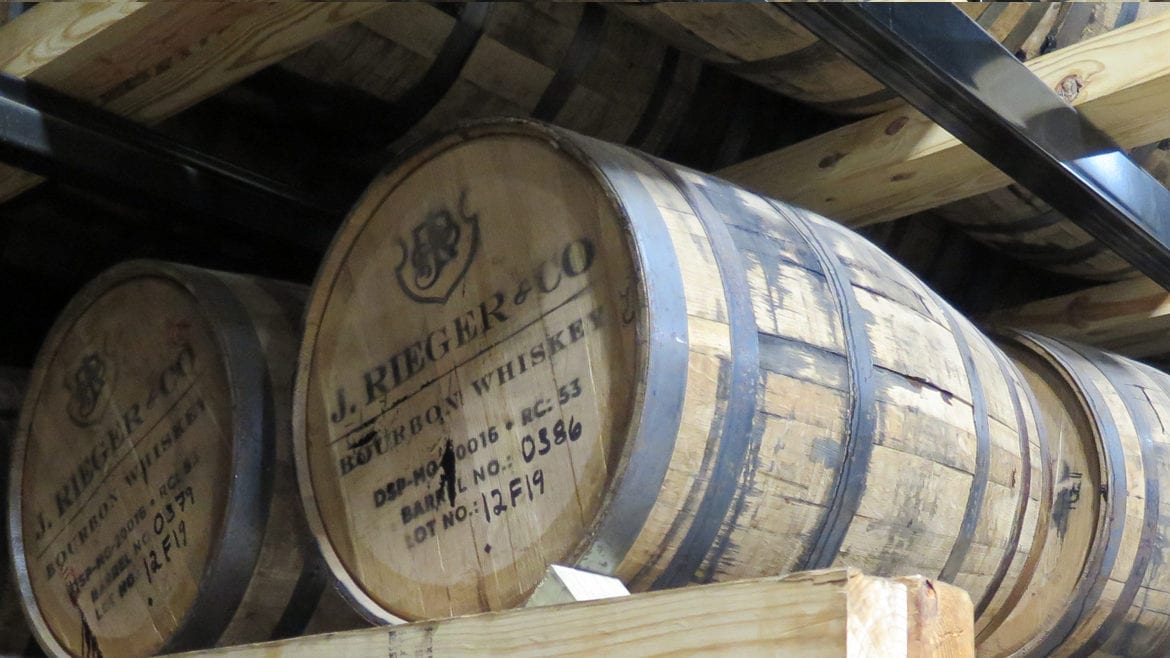 Torn Label Brewing Co. used barrels, like these from J. Rieger & Co., from distilleries and wineries around Kansas City for a new barrel-aged brew. (Pete Dulin I Flatland)
Share this story

Torn Label Brewing Company has been having a lot of fun with barrels lately. Case in point: Torn Label brewmaster and co-founder Travis Moore has crafted a 15-barrel batch of Barrel-Aged Long Time Comin’ for its 2017 release. However, rather than stick with a single type of barrel, the brewery created unique barrel-aged variants within the batch for this limited release.

The inaugural version of Barrel-Aged Long Time Comin’ was aged in J. Rieger and Company whiskey barrels. Initially released for the taproom’s first anniversary in early 2016, the beer sold out within hours.

“We loved what the year spent in J. Rieger barrels did for our big stout,” said CEO and co-founder Rafi Chaudry. “We thought it would be fun to widen the scope and age a single batch of Long Time Comin’ in a series of different barrels from local wine and spirit artisans so drinkers can enjoy comparing and contrasting the subtle flavor nuances those diverse barrels impart.”

Browne’s will host a release party for their portion of the Knappogue version the week of April 10th. Every partner will receive half the amount aged in their particular barrel for their own release. All bottles will feature a distinct neck hanger that distinguishes the particular variant. Bottles will also be wax coated in differentiating colors.

“Every version shares a common heritage, which serves to highlight how profound the various oak and spirit character of the barrels can impact the end result,” said Chaudry. “One variant might have notes of caramel and nutmeg, while others may feature an aromatic cedar character, or a sticky, chocolate cherry dessert quality.”

Torn Label will host a release party at its taproom for the entire array of 22-oz. bottles beginning at noon on May 27. The Tom’s Town portion of Barrel-Aged Long Time Comin’ will be available on draft as well as in bottles.

For craft beer lovers, this festival in Parkville is a spring rite of passage that ushers in the year’s craft beer festival season. The festival takes place at 1 p.m. on Saturday, April 29 at English Landing Park in downtown Parkville. Tickets are $36 online or $45 at the gate. Brewery Emperial’s (1829 Oak) has a pre-Prohibition American Cream Ale in the icehouse. Look for it soon. It was brewed with 20-percent corn mash, Crystal hops, and German lager yeast before being fermented on the high side of lager range and stored cold for four weeks before filtration. Also, the brewery will tap a Maibock (six percent ABV) in May, a traditional German Helles in color and flavor with noble hops, German yeast, low range lager fermentation, and 60-day lagering.

Now available in six-packs, Boulevard Brewing’s summer seasonal Zon Belgian-style Witbier is its interpretation of the classic style. Zon (Flemish for “sun”) has subtle flavors of coriander and orange peel, which makes it a delightful, refreshing summer beer. Also, Boulevard’s Changeling, a blend of dark sour ales aged in whiskey and wine barrels is out in 750-ml. bottles. Cinder Block Brewery (110 E 18th Avenue, North Kansas City, Missouri) releases Lusus Naturae (Latin for “Freak of Nature”). This farmhouse-style beer is fermented with a blend of wild yeast strains and then transferred to a variety of wine barrels for 12 months. Peach and apricot are added to trigger a secondary fermentation. The beer has a tart dry finish with loads of stone fruit flavor and aroma.

Boulevard Tours & Rec Center (2534 Madison Avenue) hosts Hop Quiz! from 5:30 to 7:30 p.m. This trivia game focuses on general topics, pop culture, and beer knowledge. Sign up in advance for $10 and receive two draft beers of your choice. A team can have up to six players and you must be over 21 years old to attend.

Stockyards Brewing Co. (1600 Genessee Street, #100) celebrates its one-year anniversary over the weekend. They will have a special beer tapping of a seasonal Cerveza Royale, a Mexican-style light lager, and re-tapping throughout the day. DJ Joc Max and Dj Ataxic will be spinning in the taproom from 8 p.m. to midnight.

This strong Belgian ale is a borderline IPA with the bitterness and tropical fruit characteristics of Mosaic and El Dorado hops. The brew was fermented with Belgian candy sugar and a classic Belgian Abbey yeast. They will also hold brewery tours and host the American Fusion food truck from 1 to 5 p.m.

Hop down to Flying Saucer Draught Emporium (101 E 13th Street) for Hoppy Easter. Flying Saucer will tap Stillwater Big Bunny, release Stillwater Superhop IPA bottles, and pass around beer-flavored jelly beans. Plus, if you find an Easter egg, then you get a free beer.

Held at Boulevard Tours & Rec Center (2534 Madison Avenue), Tap Chef is a head-to-head, three-round competitive beer and food cook off between chefs Josh Eans (Happy Gillis) and Howard Hanna (The Rieger). Both chefs will be given three local ingredients and three Boulevard beers to prepare three dishes for guests. Tickets are $30.