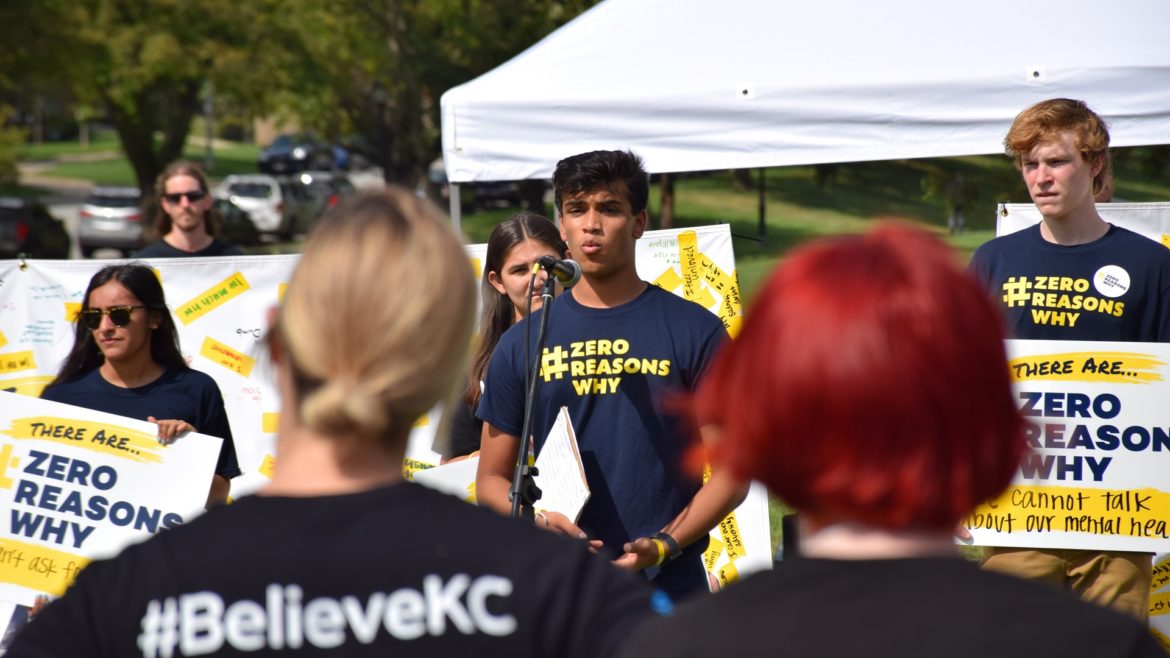 The teen was beautiful and fun-loving, a cheerleader, a peacemaker, and a girl who kept everyone in stitches.

Her personality didn’t change even after face-altering surgery prompted jeering at school. Life turned darker when a female friend was shot and killed.

The week after the funeral, 13-year-old Ashley Craddock, took her own life.

She used her father’s unsecured gun.

To this day, family members don’t know if it was the ridicule, the grief, or a combination of the two that prompted the suicide.

But her cousin, Lateshia Woodley, does know one thing: “It is something you can never get over. That pain stays with you for a lifetime.”

As executive director of student support services at Kansas City Public Schools, Woodley does not want any other family to endure that trauma.

The district is training students and staff to spot warning signs of mental illness, and it has increased the number of therapists (though Woodley hopes grants will help hire more).

A couple statistics illustrate the timeliness of Woodley’s efforts:

To many observers, the issue is crystal clear: unsecured guns in households with potentially impetuous teens is a recipe for disaster. In this line of thinking, it stands to reason that permissive gun laws contribute to the problem of teen suicide.

The San Francisco-based Giffords Law Center To Prevent Gun Violence flunks both Missouri and Kansas when it comes to gun laws. Among other things, the nonprofit says the two states should institute universal background checks for firearms purchases and repeal their “dangerous permitless carry laws.”

The National Rifle Association (NRA) fiercely rejects suggestions that firearms themselves are responsible for gun violence, including youth suicides. An NRA spokeswoman last year criticized a recommendation from the American Academy of Pediatrics that “the safest home for a kid is one without guns.”

In an online video commentary, the NRA’s Dana Loesch said a physician who was quoted supporting the academy’s recommendation seemed to be “trying to incite fear into the hearts of every family across America.”

Yet Kansas City-area medical professionals are equally as adamant about the inextricable link between guns and teen suicide.

“To me it is really about access and how it is so closely linked to death,” said Dr. Shayla Sullivant, a child and adolescent psychiatrist at Children’s Mercy Hospital.

One oft-cited statistic, derived from U.S. violent death data, is that 82% of firearm suicides among children ages 17 and younger  involve a gun belonging to a family member. By one estimate, fewer than half (39%) of U.S. households with children store their guns unloaded and locked with ammunition stored separately.

The dangerousness of that data is compounded by the fact that guns are a highly lethal way to attempt suicide, and by research showing that many people attempt to take their own lives within 10 minutes of first contemplating the act.

The latter point is especially worrisome given the impetuousness of adolescents and young adults, where a romantic breakup or problem at school can seem like the end of the world.

“Crises can really kill you, especially when you are a teen,” Bill Geis said during a teen suicide forum filmed last week at Kansas City PBS. Geis is a psychiatry professor at the University of Missouri-Kansas City.

Gender and race play a role in firearm suicides among children. Boys are much more likely than girls to take their own lives with a gun, while white and American Indian children are far more apt to shoot themselves than their black or Hispanic peers.

That racial disparity could explain why white suburban youth seem to mobilize against teen suicide more than students of color in the urban core, where the spotlight focuses largely on homicides among young black males. One of the most prominent teen-suicide prevention efforts in the area is the Zero Reasons Why campaign, which is centered in suburban Johnson County.

Complex forces within the black community help explain the racial disparity, according to Woodley, the KCPS administrator, and David Smith, the spokesman for the Shawnee Mission School District. Both of them are black.

Woodley said the stigma of mental illness remains so strong within the black community that a pastor friend only told the truth about his daughter’s suicide after he realized his cover story about complications from lupus might unduly worry Woodley. Lupus runs in her family.

Stories like that make Woodley think suicide is underreported in the black community.

Smith has a different take.

Black people in this country are conditioned to expect a difficult life, he said, so struggles are not as likely to push them over the edge. A white teen might react differently, Smith said, if the message to them has been they are supposed to succeed with ease.

In addition to limiting the means by which kids can take their own lives, suicide prevention specialsts say that parents must not shy away from frank and direct conversations with their children. Suicide should not be a taboo subject.

There is also evidence that physicians can effectively counsel patients on safe storage of firearms and ammunition.

For Woodley and her family, Ashley’s death was like a total eclipse snuffing out a ray of sunshine.

The girl’s parents divorced after Ashley’s dad dulled the pain with alcohol. And even though it has been nearly a decade and a half, the trauma continues to haunt Ashley’s siblings and Woodley’s son.

The suicide, Woodley said, has left “a gaping hole in the family.”