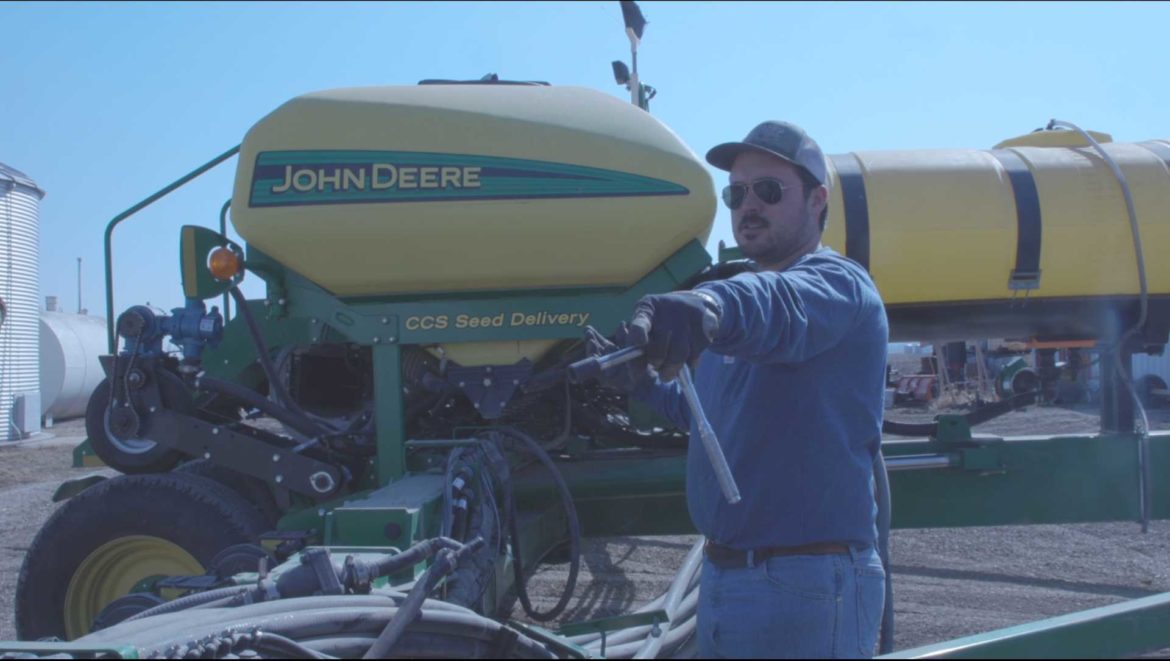 WATSON, Mo. — Trey Garst hops into his black Chevy pick-up truck at 8 a.m. on a Thursday morning. Heavy metal blares from his speakers as he sips water out of his large silver thermos.

“Most people think because you’re a farmer that you like country music,” Garst says. “I like metal.”

He talks about Corey Taylor, lead singer of Slipknot and Stone Sour, while pulling out his phone to play a YouTube video of the singer’s “Wicked Game” cover.

‘Steward of the Land’

This is the first in a series of occasional stories as Flatland rural affairs reporter Jacob Douglas follows a Missouri farm family through the seasons of the year. This coverage is made possible, in part, with the support of Report for America.

Garst has a lot of time to watch music videos this time of year. While the ground is still too wet to plant, he’s in one of the world’s slowest races against the clock. He has to get his grain to the local elevator before it fills up, since the train only comes once a week to pick up the product of his labor.

On March 4, Garst sits in his grain truck with a load of white corn piling up in the back. There is a mattress in the cab of the truck. It’s never been used, and Garst notes that the truck actually was cheaper because of the sleeper cab.

For the amount of time he spends waiting in line at the grain elevator, he probably has time to use the bed to take a nap.

But taking naps during the work day isn’t really a part of a farmer’s mentality, and it certainly isn’t a part of Garst’s. He’s more concerned with getting his grain bins by the Missouri River emptied in case Mother Nature happens to strike, as she has so often in this part of Missouri.

Garst is a sixth generation farmer, whose family has been working this 2,700 acres since the early 1800s. In that time, the family has seen its share of floods and other disasters on the farm about two hours north of Kansas City along Interstate 29. In just the last two years, the farm has been hit by two extreme events.

In 2019 the Missouri River flooded, causing massive damage to communities like Craig and the surrounding farmland. A year later COVID-19 happened.

If you ask Garst which had a bigger impact on his operation, hands down the answer is the flood.

In 2019 Garst and his father, Garry, weren’t able to farm all of their land. Last year with the river receding, they were able to work some of that ground. Throw that on top of some federal relief for COVID’s impact on the markets and recently booming commodity prices, and 2020 was a great year for Garst operation.

Sometimes in the grain truck, while he’s waiting hours to dump a load of grain, Garst will listen to the “Dave Ramsey Show,” featuring a financial show host obsessed with eliminating debt. It’s a philosophy that Garst has bought into.

In fact, Ramsey has influenced Garst so much that he declined a five figure PPP loan for a number of reasons, one of those being reluctance to be in debt to the federal government.

“You know, I didn’t feel right because I believe that if I haven’t earned it I don’t deserve it,” Garst says. “I didn’t do anything to earn that money, so I’m not going to take it.”

Notably, farmers across the U.S. received more than $20 billion in subsidies in 2020. A majority of those were relief for former President Donald Trump’s trade war with China that hurt commodity prices. Coronavirus Food Assistance Program relief was given out twice by the United States Department of Agriculture. Garst received those payments, but says they didn’t boost his operation significantly.

The biggest drivers behind success in 2020 for Garst was the ability to farm ground he couldn’t in years past due to flooding, and increased commodity prices. A year ago, many farmers thought they may never see corn get above $5 a bushel again, or soybeans rise above $10. That day has come, and both markets continue to rise. Soybeans reached more than $14 a bushel in March, and corn prices rose to more than $5.50.

Garst’s sunny outlook matches that of most American farmers at the moment. The Purdue University Center for Commercial Agriculture’s Ag Economy Barometer gauges farmers’ optimism levels on their current operation, and the future.

The March edition of the barometer found current optimism among farmers is at its highest level so far in 2021, and near an all-time high. Even so, the barometer’s index of future expectations is down 20% since October, the same month of the 2020 election.

As always, politics nearly as much as weather influences the mood of farmers.

Garst acknowledges that the Trump-led trade war hurt the markets, but he views it as a necessity, sort of like stopping a bully on the playground who had taken advantage of someone for too long. Garst wasn’t a Joe Biden supporter leading up to the election, but now he has full hope that the new president will be successful in leading the country, and helping farmers.

As for those policy changes, specifically environmental restrictions that farmers are worried about, Garst is frustrated.

Despite his good fortune, 2020 wasn’t rosy all of the time. Much like the rest of the country, Garst and his family had to deal with coronavirus. His wife Shelby is a school teacher in the area, and had to quarantine a couple of times due to outbreaks at the school.

Trey also had to quarantine after a family member tested positive for the virus. He shacked up with his father, which he says was actually quite fun. It was just him and his pops hanging out, a huge reason why he loves farming in the first place.

Trey’s operation is called Garst and Sons Inc. Family is deeply ingrained into what he does.

“I always wanted to go with my dad to farm,” he says. “I get to work with my dad every single day, and that’s my favorite part.”

Garry and Trey eat lunch together just about every day. Whether it’s his mom bringing lunches to the field, or stopping by the local diner or Mexican restaurant to grab a bite, the two are together a lot. When in the grain truck, Garry passes by in his truck, after dropping a load at the elevator. The two exchange waves.

Now age 28, Trey became a father recently, and he and his wife are expecting their second child this year. They have decided to forgo the extravagant “gender reveal” process that has become infamous on social media, and leave the sex of the child a surprise. He refers to it as one of God’s last true surprises.

As for whether he wants those kids to follow in his footsteps and help on the family farm, that’s also not up to him. His dad didn’t force him, and he doesn’t want to do that either.

“I begged him (Garry) every day and weekend to let me go with him,” Trey says. “So it’s just something that’s always been natural for me to want to do this. It was something that was in me at a young age, because I could never imagine doing anything else.”

That said, his one-year-old son does love playing with toy tractors and riding in the fields with his dad, just like Trey did when he was young.

Now he is all grown up, playing with the real thing. A welder is coming tomorrow to install brackets on his planter, getting it ready for a heavy plant season once the fields are dry enough. Before that happens, he has to make sure it’s ready for him to work on. It’s just more of the prep work to put himself in a good position to succeed in 2021.

Things are good for Garst right now, with a promising year ahead. The Missouri River remains in its channel, at least for now, and big changes loom on the horizon.

“I could not be any more content with my life right now.”