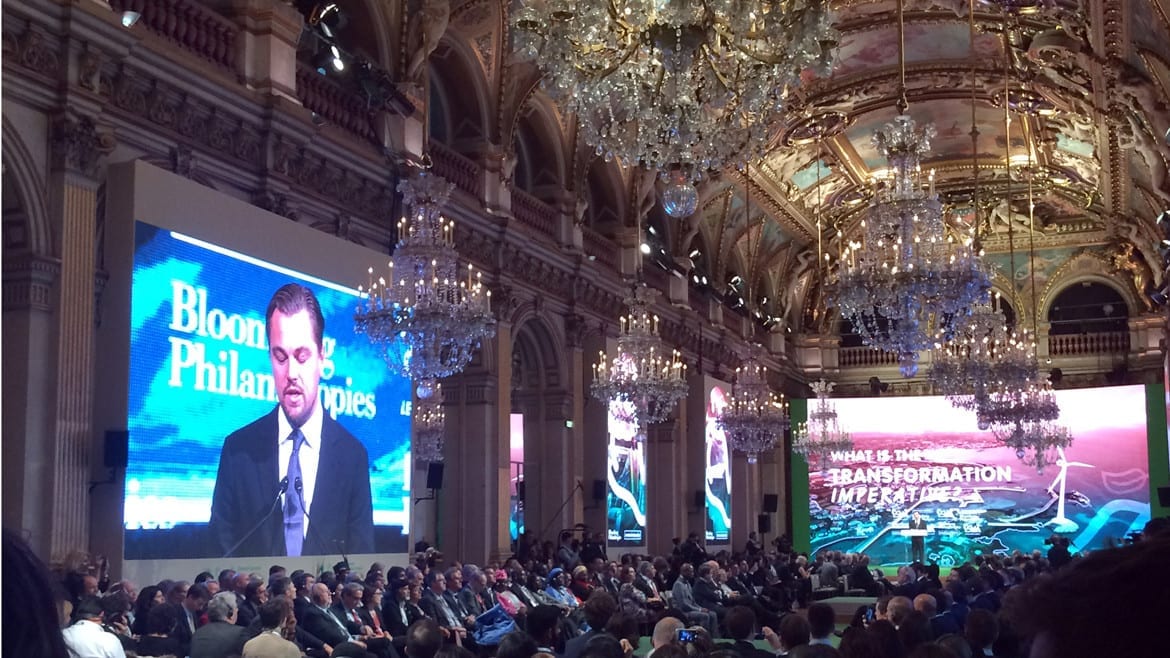 US actor Leonardo DiCaprio is seen on a giant screen during a meeting with Mayors to push for local actions and fight climate change during COP21, United Nations Climate Change Conference in Paris, France. (Photo: Catherine Gaschka | AP)
Share this story

At the Climate Summit in Paris, Leonardo DiCaprio delivered a powerful speech about the dangers of global warming. Afterwards, Leo got into a private jet, flew to one of his several mansions and spent some time chilling on a giant yacht.

Coca-Cola said on Friday that it may have to close some bottling plants in India if the government pushes through a proposal that would subject carbonated drinks to a 40 percent “sin tax.” We’re not sure about the merits of the tax, but if you think soda pop is a sin, you are leading a seriously boring life.

Donald Trump fell behind in the polls, so he said a bunch of wildly controversial stuff about Muslims. Social and mass media, obligingly, gave non-stop attention to Trump’s message. Now he leads in the polls again. Trump was also endorsed by a well-known White Supremacist. Then he was attacked by an American bald eagle. Because symbolism is awesome.

After the San Bernardino shootings, President Obama urged Congress to prohibit anyone on a no-fly list from purchasing a gun. “What could possibly be the argument for allowing a terrorist suspect to buy semi-automatic weapon?” he asked. The argument is due process. The president’s proposal, according to the ACLU, would be illegal under the Fifth Amendment because the no-fly list is arbitrary, secretive, the standards for inclusion are vague, and innocent people are often blacklisted without a fair process for redress. The President, who taught constitutional law at the University of Chicago, had tweeted “Closing the No-Fly List loophole is a no-brainer.” Which it is, but maybe not in the way he intended.

In maybe the stupidest political correctness story of all time, students at Lebanon Valley College have called on school administrators to rename “Lynch Memorial Hall,” citing the racist connotations of “lynch.” In other words, we as a society have now reached the point where people are offended by homonyms.

A man tried to snort cocaine during a traffic stop in Seattle. Maybe the officer had told him to “follow the white line” and he just got a little confused.

Peter Robbins, a former child actor who voiced Charlie Brown in the classic Peanuts specials, was sentenced to prison for threatening the manager of a mobile home park. Maybe Lucy moving the football made him finally snap.

A judge has granted the New York Attorney General’s request to bar fantasy sports sites from the state. Customers of so-called daily fantasy Sports sites will wager money based on their knowledge and research in hopes of predicting the future. Which is supposed to be Wall Street’s job.

The University of Vermont is offering a course in the science of marijuana, and nearly 90 students have signed up. Snacks will be served. Hacky Sack optional.

According to a report by the Aviation Department, building a new single terminal at KCI is cheaper than renovating the existing structures. A new airport could cost about $964 million. Which sounds like a lot – until you remember that the downtown streetcar system cost more than $100 million and those things will only move you about ten blocks.