He saw his son lying dead, shot by sovereign citizens 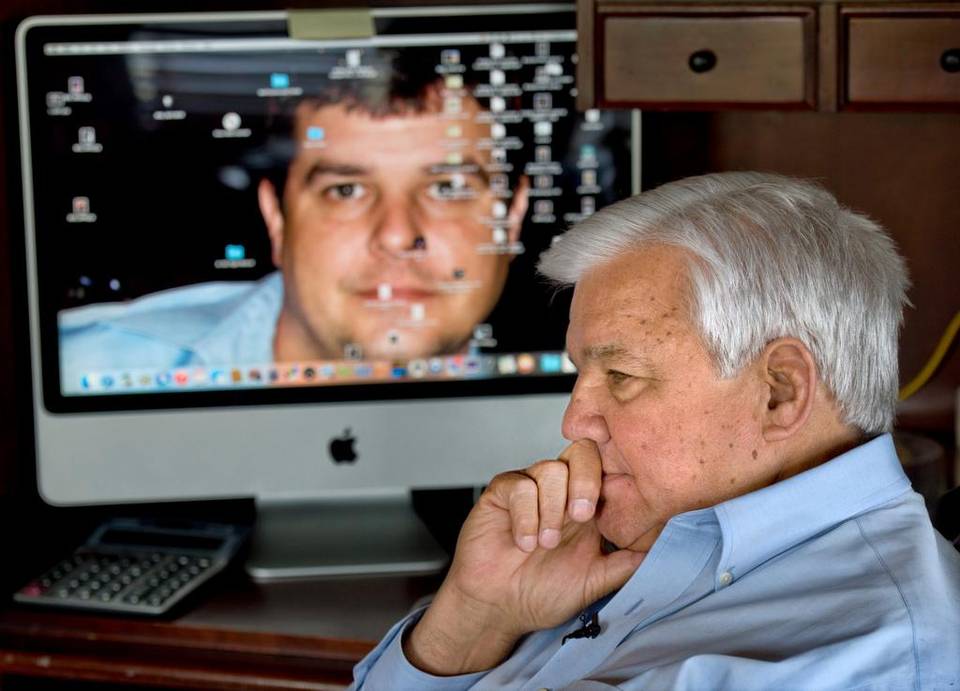 Although nearly five years have passed, telling the story hasn’t gotten any easier for Bob Paudert.

But here was the former police chief of West Memphis, Ark., standing before dozens of law enforcement officers to describe the day that turned his life upside-down and to hopefully prevent such a tragedy from ever occurring again.

These days, this is how Paudert spends his time — traveling the country to educate other law enforcement officers about violent extremists, whose numbers and outbursts are increasing.

And once he started speaking, his message — and the dash-cam video that showed the horrific events of that day — silenced the room.

That morning in 2010, Paudert said, started out like a typical day at the West Memphis police headquarters.

The four-officer interstate team, led by Paudert’s son Brandon, a sergeant, was conducting traffic stops, trying to stem the flow of drugs along Interstates 40 and 55.

Bob Paudert was looking forward to spending a long weekend with his wife, who had just undergone triple bypass surgery. The two were heading to property they owned near Springfield. He picked her up at 11:30 a.m., and shortly after they got on the interstate a call came over his police radio. Officer down at Exit 275 on Interstate 40.

Paudert was less than 2 miles away. “I figured, ‘It’s got to be the state police.’ I told my wife, ‘I’m going to run over and see if they’re OK before I leave town.’”

Just as they arrived, the dispatcher reported that two officers had been shot. Paudert stopped a short distance away and told his wife to stay in the car.

“I saw the officers running down the slope and one of my officers lying in a pool of water in the ditch, facedown,” he said. “And they pulled him out of the water and they said, ‘Bill, you’re going to be OK.’ So I knew it was Bill Evans. His vest was shredded to pieces. He’d been shot 11 times with an AK-47.”

As Paudert stood over Evans, he tried to figure out what had happened. Evans was an outstanding SWAT team member; he probably had more training in high-risk situations than anyone on the force.

“And when I looked down at him, I noticed that his gun was still locked in its holster,” Paudert said. “He never drew his weapon.”

Then Paudert remembered that the dispatcher had said there were two officers involved. He looked from the ditch up the hill.

“One of my sergeants was standing there, and I ran up and he grabs me and says, ‘Chief, please don’t go around there.’ I pushed him aside and went around.

“And I see Brandon lying there on his back on the interstate. The back of his head had been shot off. He had been shot 14 times with an AK-47. He had his left hand over on his heart, and his right hand was extended out with a .40-caliber Glock clutched in his hand. He was lying among all these shell casings, and he was just shot to pieces.”

As he stared at his son, Paudert realized that he had to make decisions both as a father and as a police chief. Then he remembered his wife was still in the car.

Paudert then had to call Brandon’s wife and tell her to go get the couple’s three children, ages 14, 9 and 8, from school.

They found the gunmen, Jerry Kane and his 16-year-old son, Joe, in a Wal-Mart parking lot 90 minutes later. The Kanes had changed clothes, removed the license plate from their van and were getting ready to take off when the county sheriff and his deputy pulled in and approached them head-on. The gunmen got out of the van and started firing, hitting the sheriff in the shoulder and the deputy in the abdomen.

A wildlife officer who had heard the call and showed up to help then rammed the van with his truck and fired 30 rounds from his AR-15 into the van.

The younger Kane continued firing at officers, even after his father was killed. Then he was shot to death a few minutes later.

The investigation revealed that Jerry and Joe Kane had been crisscrossing the country preaching about the sovereign citizen movement.

Paudert said Jerry Kane had been stopped in several states for driving without a license. The last time was a month before the shootings, he said, when Kane drove through a DWI checkpoint in New Mexico. When the trooper asked for his driver’s license, Kane handed him a “traveler’s card” — a form of identification some sovereign citizens use because they don’t believe in driver’s licenses.

The trooper arrested Kane, and he spent two days in jail before posting $1,500 bond.

By then, Paudert said, Kane was furious at law enforcement. He and his son drove to Phoenix, where they attended a gun show and bought an AK-47, along with several hundred rounds of ammunition, a pistol, a hunting knife and a pound of marijuana, Paudert said. Then they headed east.

“He wasn’t concerned about being arrested again,” Paudert said. “He was ready for war.”

And on that warm spring day, West Memphis police officers became the enemy.

When Evans pulled Jerry Kane over, the man gave Evans his “traveler’s card,” Paudert said. Kane also had a document declaring that he was no longer a citizen and didn’t have to obey the laws of the land or pay taxes. Then he handed Evans a piece of paper that said the van was registered in the “kingdom of heaven.”

“There’s a Bible in the van,” Paudert said, “and then (Evans) sees he’s a pastor, he sees scriptures written, he had written sermons.

“Then he checked the registration on the Ohio plate, and it comes back to a church. So he is absolutely convinced that this father and son were going around preaching the gospel.”

In reality, all of the documents were related to sovereign citizen activity, Paudert said.

When Brandon Paudert heard the chatter on the police radio about the vehicle registration, he drove over to see what was going on.

The dashcam from the police car shows him looking at some of the documents. Jerry Kane and Evans disappear from view. Then suddenly, Brandon Paudert turns to see what is going on. A witness told police that Jerry Kane had shoved Evans toward the ditch.

“The exact second when Brandon turns, the door opens on the van and the kid gets out with an AK-47,” Bob Paudert said. “Brandon never saw it.”

The teen opens fire on both officers, and Evans falls into the ditch.

“Brandon returns fire, and then he takes cover behind his car,” Paudert said. “And a FedEx driver who witnessed the entire shooting said one of the first shots hit Brandon in the head … and he was dead in the air.”

Still, he said, the teen walked over to where Brandon had fallen and shot him several more times.

Although some other agencies were aware of the Kanes, the information hadn’t been shared, Paudert said. The FBI was tracking the Kanes but considered them white-collar criminals rather than domestic terrorists because they were defrauding people, he said.

Paudert later made two trips to Washington, D.C., to talk to authorities about the lack of shared information, and the FBI changed its policy.

“The sovereign citizens now are still listed as white-collar criminals, but they’re also listed as domestic terrorists in the database,” he said. “So if you stop one, there should be a red flag that comes up.”

After the shootings, Paudert began traveling the country to teach others about the potential dangers of dealing with sovereign citizens.

Now he works as a contractor for the State and Local Anti-Terrorism Training program, funded by the Bureau of Justice Assistance, and also does some presentations on his own. In November, he led sessions in 11 Missouri cities, with hundreds of law enforcement officers attending from around the state.

Although Paudert is committed to continue getting the word out, he conceded that the training sessions can take a toll.

“I don’t know if it’s beneficial to my health by reliving it every day,” he said. “Sometimes, I have to take a break and pause to get through it. But the one good thing I get out of it is knowing that another officer can go home to their husband and wife at night. And particularly to their kids.”

And yet at least eight more law enforcement officers have been slain by sovereign citizens and other anti-government extremists since that day in West Memphis.

To reach Judy L. Thomas, call 816-234-4334 or send email to jthomas@kcstar.com. Video by Todd Feeback. To reach him send an email to tfeeback@kcpt.org.

A Variety of Virtual and In-Person Entertainment Options