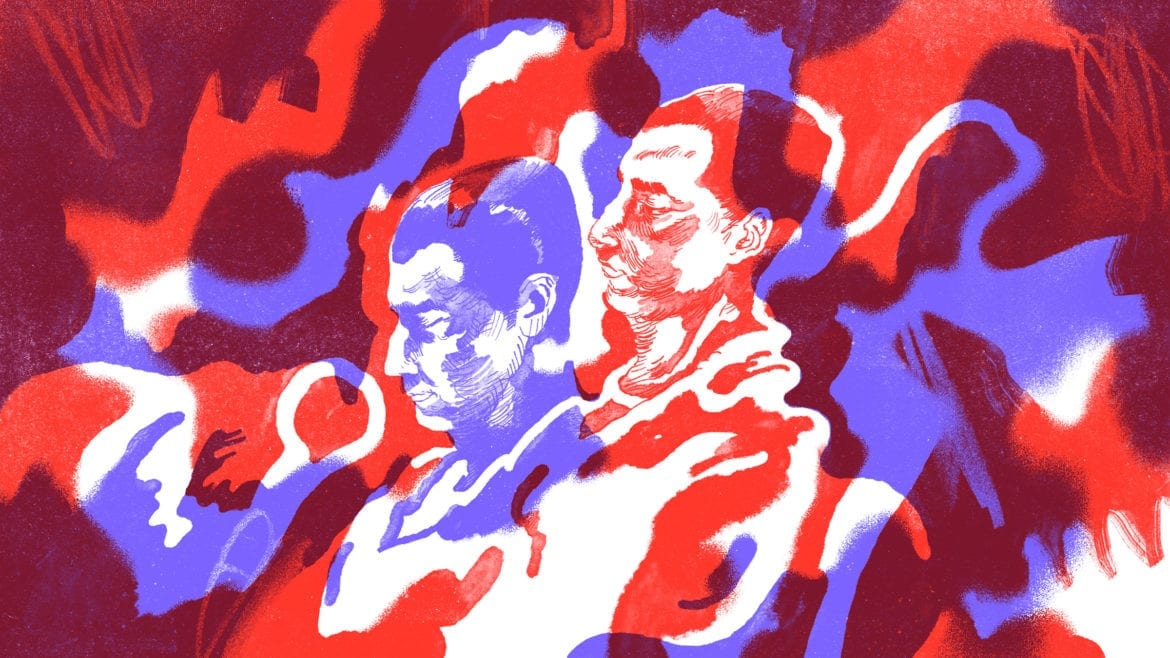 Bryan Sheppard sits in a courtroom at the federal courthouse in Kansas City during his resentencing hearing in mid-February. A judge ruled today, March 3, that Sheppard, who was sentenced to life without parole for the 1988 arson deaths of six Kansas City firefighters, will be released for time served under the Supreme Court findings in Miller vs. Alabama, a case regarding the sentencing of minors. (Illustration: Kelsey Borch | Flatland)
Share this story

Bryan Sheppard, the youngest of five people sentenced to life in prison for a 1988 explosion that killed six Kansas City firefighters, will be released, possibly in the next few days, a federal judge ruled today.

Members of Sheppard’s family, who packed one side of a federal courtroom here this afternoon began sobbing as the decision was being read by U.S. District Judge Fernando J. Gaitan Jr.

“They finally let my son out so that he can come home and be with his family,” his mother, Virginia Sheppard, said through tears from her wheelchair outside the courtroom.

Sheppard, who was 17 at the time of the deadly, arson-fueled explosion – and who has continuously maintained his innocence – is to meet with his probation officer Monday, his attorney was told, an indication that he may be released before then.

Sheppard, who will be 46 on Sunday, has been in prison for the arson conviction since 1996.

Today’s decision resulted from a 2012 U.S. Supreme Court case, Miller vs. Alabama, which held that, for juveniles, life sentences without the possibility of parole violate the cruel and unusual punishment clause of the Eighth Amendment.

The case is based on research showing that adolescents “lack the experience, perspective, and judgment to recognize and avoid choices that could be detrimental to them.”

Defendant in Firefighters’ Tragedy Gets a Re-Sentencing Hearing

Because they were older at the time of the crime, the three surviving defendants are not eligible for shorter sentences. A fifth defendant died in prison.

During an earlier phase of the hearing, family members of two of the six firefighters said their families were decimated by the deaths.

“I have a hole in my heart, and I believe this man should stay in jail for the rest of his life,” said Debbie McKarnin.

Firefighter families and their supporters, who were also in the courtroom today, reacted to the decision with silence.

Assistant U.S. Attorney Paul Becker, who was also the chief prosecutor at the 1997 trial, had argued earlier that Sheppard was only 114 days shy of his 18th birthday when the crime occurred.

Sheppard’s attorney, Cyndy Short, got exactly what she had asked for in earlier arguments in the re-sentencing case — credit for the 22 years he has served and a near-immediate release.

Judge Gaitan noted in his written opinion later Friday that while the crime “resulted in a tragic loss of six lives,” the Court “cannot ignore the statements made by the trial judge, that he did not believe that the defendants intentionally with malice and forethought set out to kill the firefighters.”

Gaitan noted also that Sheppard “has consistently maintained that he is innocent of the charges. Also of note is that several of the witnesses who testified against Bryan Sheppard at the trial have since recanted their testimony.”

He then sentenced Sheppard to 20 years. He has already served 22.

Gaitan also sentenced Sheppard to five years of supervised release with strict conditions and required that he help finish making payments to the city for the loss of the fire trucks destroyed in the explosion.

Sheppard testified earlier in the hearing that since his incarceration, he has committed himself to sobriety and has done everything he can to better himself.

“I know it is of little comfort to the families,” Sheppard said, adding, “I am very sorry for the loss everyone in this room has suffered.”

Lurking in the background of the case are longstanding questions about whether Sheppard and his co-defendants actually committed the crime.

The government has since acknowledged, in what it called a “significant” finding, that additional perpetrators “may have been involved in the arsons in addition to – and not to the exclusion of – the defendants.”

The government has long refused to release the names of those additional suspects.

Sheppard is the first federal defendant in the Western District of Missouri to get a re-sentencing under the Miller decision.

One other case is pending.

National ‘Reveal’ Podcast on the Case

— Mike McGraw is a Special Projects Reporter. Contact him at mmcgraw[at]kcpt.org.