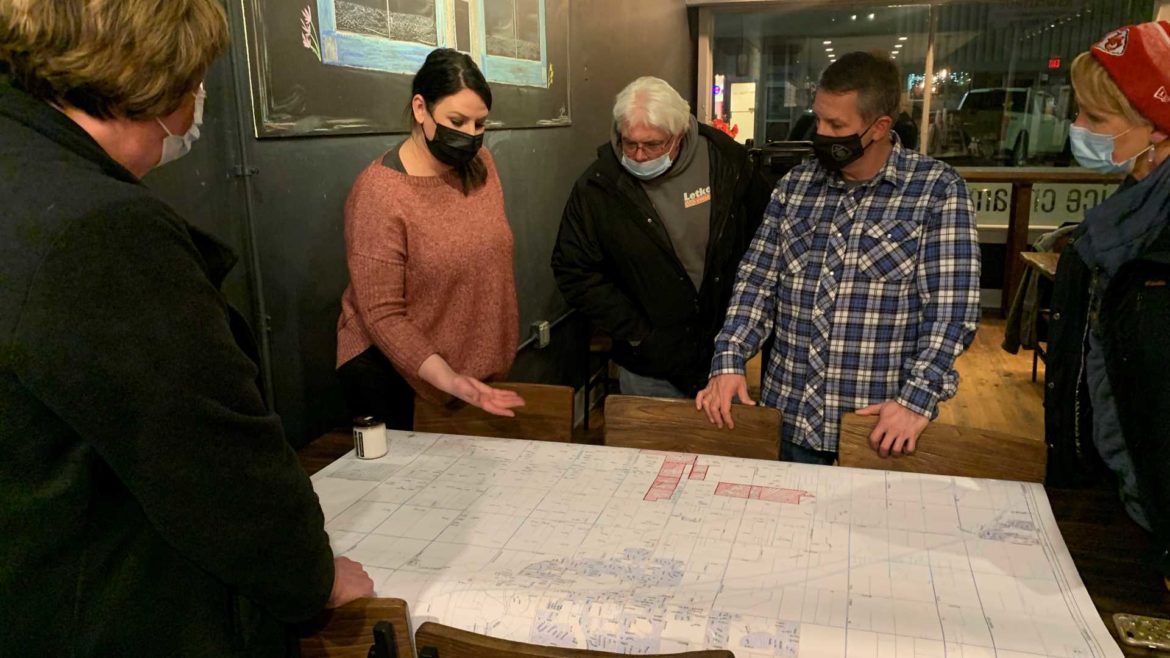 Jenni Koch shows other residents the parcels of land up for rezoning at The Coffee Bean Co. in Spring Hill, Kansas, on Feb. 9, 2021. That night, the Edgerton planning commission recommended not rezoning the land. (Jacob Douglas | Flatland)
Share this story

SPRING HILL, Kansas — On the night of February 9, about 15 people huddled around a small monitor connected to a MacBook in The Bean Coffee Co. On the monitor was a Facebook livestream of a podium in the middle of a community hall meeting room in neighboring Edgerton.

Over by the coffee bar was a table with a massive map highlighting parcels of land in rural southern Johnson County. The map detailed the shrinking wedge of now-rural land between Spring Hill, Edgerton and Gardner that the people in this room have been fighting to protect over the last four months.

That night, the Edgerton Planning Commission recommended denying the rezoning of seven parcels of land along South Gardner Road from rural residential to industrial park, which would make room for the expansion of the Northpoint Development’s Logistics Park Kansas City along nearby Interstate 35.

At the time, emotions were high. Rural property owners won a land-use battle that night, but they stopped short of a full-on celebration. They knew the war wasn’t over, and they were right.

The people living just outside of Edgerton’s newly annexed land may have Gardner and Spring Hill mailing addresses. But they identify as rural Johnson Countians who feel they have been unfairly treated by Edgerton officials they did not elect.

On March 11, the Edgerton City Council met to decide whether or not they would follow the planning commission’s recommendation. After nearly three hours of public comment from both supporters of rezoning (most of which were Northpoint employees) and those opposed, the council decided they would send the issue back to the planning commission, because they were not satisfied with their lack of reasoning for denial.

Last week, the planning commission reversed its recommendation. Commissioners suggested approval of the rezoning of those seven parcels of land. The council will decide Thursday whether or not to follow that decision. The belief among opponents is that the council will.

“I know that we are going to continue to fight,” said Connie Mayberry, a rural resident whose back yard abuts the proposed land rezoning. “It’s just, I feel defeated. I feel like they’re (Edgerton) not a good neighbor. People I have known for most of my life have sold us out and don’t care at all because it doesn’t affect them personally.”

On the day after the planning commission made its decision, Jenni Koch woke up to do chores around the 80-acre farm she shares with her in-laws. Feeding her animals, Koch realized why she has fought so hard these last four months.

“We will fight it,” Koch said. “Seeing that (lifestyle) is what keeps us going, but it’s not easy.”

Koch has been one of the leaders and organizers of a group of hundreds of concerned rural residents in Johnson and Miami County. Like a lot of the other people fighting to maintain their rural way of life, Koch has been doing this in addition to her real life.

She’s a business owner, a mother. Koch says because of how busy she has been fighting this battle, she hasn’t been able to spend as much time with her family as she would like.

“We’re having to fight this because nobody else will,” Koch said. “We as citizens should not have to privately fund this fight.”

Mayberry resides closer to Gardner. There is a boundary designated by an old gas pipeline that will separate her home from the new construction that would occur as the result of rezoning.

She grew up here. The land has been in her family since the 1940s. Her parents live on one side of her, and her childhood home sits on the other. A sprawling field with a pond sits just behind the three residences. If warehouses are built, it will all be paved over.

“I have to stick around because I can’t leave my parents at 83 and 80,” Mayberry said. “But trust me, if they weren’t here I would be gone.”

Mayberry is planning on planting trees along the line to create a wall between her and burgeoning warehouses. But even then, it’s going to take potentially a decade to create a true barrier between her life and the new one that is going to unfold when the expansion overtakes her back yard.

The argument from Edgerton and Northpoint all along has been that this expansion will bring jobs and progress to this area.

On the night the city council bounced back the decision to the planning commission, several Northpoint employees talked about how their lives have been positively impacted by the jobs created by the intermodal.

Scott Mueller, a resident of Gardner and employee at the logistics park, told the city council that night that he grew up in a rural town. He stated that once all of the industry left, so did the people. Now all that is left are farmers and their land.

“We need to get more people in here, and get the jobs flowing,” he said.

Others testified that they moved to Gardner for jobs at the intermodal facility, and expected more to do the same.

But the “warehouse warriors” of rural Johnson County say they aren’t opposed to progress and jobs. But they are against a corporation and representatives that they did not vote for encroaching on their way of life.

Patrick Robinson, vice president of acquisitions at Northpoint Development, said he hopes the intermodal expansion will bring durable assets as well as a long-term partnership with the community to make sure those assets are viable.

“I don’t feel like we were going into any of those meetings feeling overly confident, but we did feel like they cared,” Koch said. “And they heard us the first round, so for them to completely disregard that and say, ‘oh well, it’s going to happen no matter what.’ We might as well do (fight) it.”

That is exactly what Koch and the rest of the Protect Rural JoCo group intend to do. They have hired a lawyer, and are prepared to take legal action against what they believe to be a corrupt and unfair process.

In addition, a member of the group submitted a petition to the Miami County Board of Commissioners on April 13 proposing a new town in the area to be called “Golden, Kansas.” The name is a reference to the so-called “golden criteria” used to assess land-use decisions, which have caused much debate around the legality of the rezoning. The petition has nearly 300 signatures.

This is symbolic of a group of people who feel like their neighbors have left them behind, and like they are being forced to change their entire way of life by representatives who they did not elect.

“Over here, they don’t care about us,” Koch said. “We’re not in Edgerton. We never will be.”

Back on that night in February, Koch told Flatland that there was still a lot more work to be done, which seems like an understatement today. She said that if they fail, she will be moving elsewhere. But she’s not focused on that currently.

“I can’t let myself go down that path because our fight is so strong,” Koch said. “It’s just too depressing.”