Behind the Bryan Sheppard Ruling: What the Release Order Says and Doesn’t Say 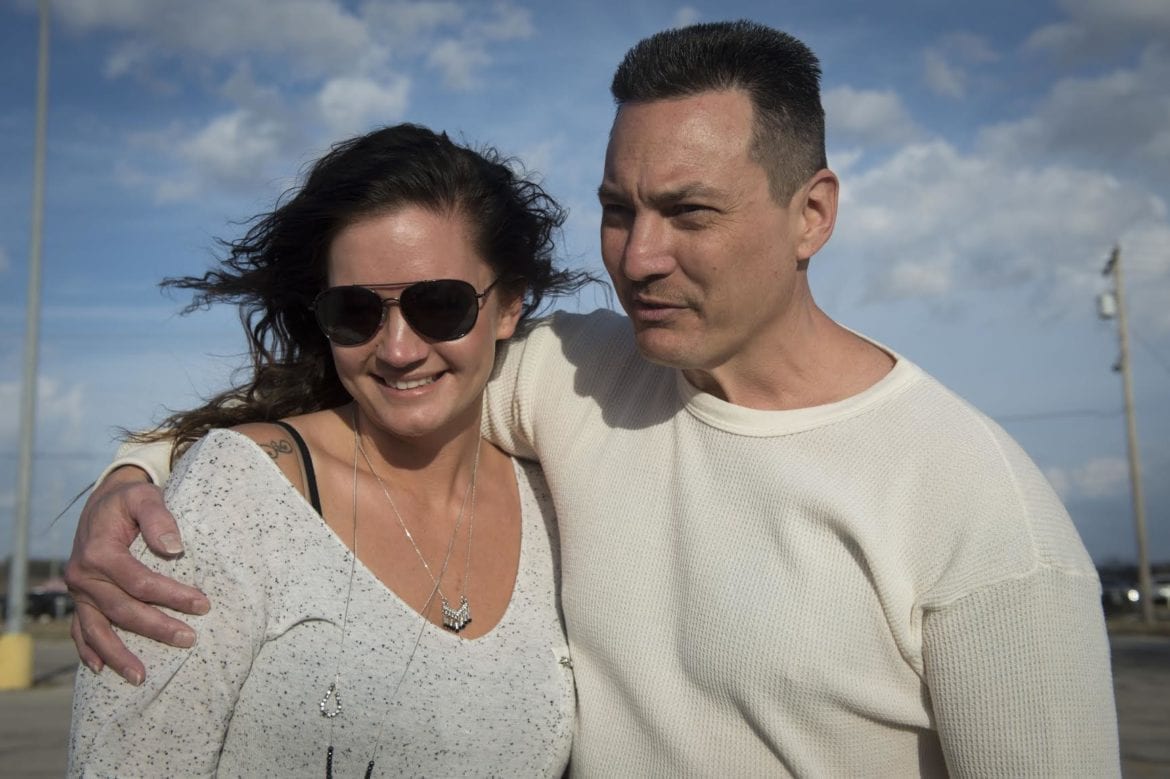 Bryan Sheppard’s long wait for freedom ended late Monday, when he was greeted by his daughter, Ashley Keeney, after his release from the Leavenworth Detention Center. (Tammy Ljungblad | The Kansas City Star)
Share this story

A federal judge’s decision last week to release a man serving a life sentence in the 1988 deaths of six Kansas City firefighters was, at least for some of the families of those men, a hurtful betrayal by the legal system.

For the families of the accused, it was the final arrival of justice long delayed.

And for both sides, it showed that decisions handed down by the U.S. Supreme Court can have wrenching and far-reaching impacts on real people.

The decision may have an outsized impact on other Kansas Citians who remember the arson-fueled construction site explosion. The blast near 87th Street and Bruce R. Watkins Drive was so massive it cracked foundations, ruptured gas lines, broke windows and quickly elevated the firefighters to hero status.

At its core, the decision Friday by U.S. District Judge Fernando J. Gaitan to release defendant Bryan Sheppard — a juvenile at the time of the crime and a grandfather now — was based on a 2012 Supreme Court decision that bars automatic life sentences in such cases.

But Gaitan’s 22-page order in the case offers a deeper analysis of a high-profile 1997 prosecution that ended with the convictions of five defendants and has troubled many in the Kansas City legal community for two decades.

A measured jurist who denied an earlier appeal in this case, Gaitan acknowledges in his order some of the inconvenient facts that have surfaced since the convictions. That it took nearly a decade after the 1988 explosion to bring about those convictions, with most of that time spent on a theory that federal agents later abandoned, was lost on no one.

Gaitan’s order includes a discussion of over-reaching criminal statutes passed during America’s law-and-order era in the 1980s and 1990s — and that many on the left and the right now want to eliminate. And it acknowledges emerging brain science asserting that juveniles are too immature to be given life sentences.

But it can also be seen as a shot across the bow of a prosecution that has long been mired in controversy.

Over the years, the U.S. legal system has treated juveniles harshly, Gaitan noted in his order. But the “law and order” decades of the 1980s and 1990s, Gaitan quoted one commentator as saying, ushered in “an even coarser treatment of youth due to the rise in popularity of the myth of the juvenile ‘superpredator,’ … radically impulsive, brutally remorseless youngsters … who murder, assault, rape, rob, burglarize.”

Though the theories turned out to be wrong, Gaitan said others have noted that “cultural lore around the superpredator claim contributed to Congress enacting and President Clinton signing the Violent Crime Control and Law Enforcement Act of 1994 …which, among other things, authorized the federal prosecution of juveniles as adults for certain crimes of violence.”

But the law slowly evolved, as it always does, and it finally caught up with science. The law now says juveniles should be treated differently because human brains don’t fully mature until age 18 or later.

The families of the fallen firefighters, who waited nearly a decade for closure in this case and then had to relive their grief in a weeks-long 1997 trial — and once again last week — strongly reject that notion.

But it is the basis for a 2012 Supreme Court decision, Miller v. Alabama, which found that life sentences for juveniles are in many cases a violation of the Eighth Amendment prohibition against cruel and unusual punishment.

And that’s why Gaitan released Sheppard, the only one of the four surviving defendants who was under 18 at the time of the crime.

Gaitan found that Sheppard’s tumultuous upbringing by alcoholic parents, who were themselves parented by alcoholics, was a factor indicating immaturity and the idea that he could have easily been misled by the older defendants — primarily his two uncles.

Gaitan also noted that Sheppard’s “relatively few” criminal convictions and exemplary conduct in prison demonstrate that he falls within the category of the juvenile offender whose crime reflects what the courts call “unfortunate yet transient immaturity.” It does not indicate that he is the “rare juvenile offender whose crime reflects irreparable corruption.”

In the end, Gaitan’s decision rejected an argument by Assistant U.S. Attorney Paul Becker (the original prosecutor in the case) that Sheppard should serve the rest of his life sentence. But the judge didn’t sentence Sheppard to another 10 years or 20 years, as he could easily have done, and which some had expected.

Instead, he ruled that the 20-year sentence Sheppard had already served was sufficient. And in doing so, he meted out one of the shortest sentences on record so far in Miller vs. Alabama resentencing cases.

Decisions have been handed down in 16 of the 28 resentencing cases that have been brought on the federal level. Of those cases, two inmates were ordered to complete their life sentences, and the remaining 14 were resentenced to anywhere from 10 to 60 years.

Sheppard’s sentence of 20 years (or time served) was the second lowest of all those cases.

That’s what stunned both Sheppard’s family and the families of the fallen firefighters who packed the courtroom last Friday.

But why did Gaitan hand down such a ruling, sure to be unpopular with the still-grieving families? The rest of his opinion may offer some clues.

The Elephant in the Room

“There is no denying that the crime which the defendants were convicted of resulted in a tragic loss of six lives,” Gaitan prominently noted in his order.

But Gaitan said he couldn’t ignore the fact that the judge in the original 1997 trial “did not believe that the defendants intentionally with malice and forethought set out to kill the firefighters.”

In fact, he added that, according to the government’s own theory of the case, Sheppard and the others went to the highway construction site to steal tools and that they set the fires merely to cover up their crime.

That whole theory of the case has long been questioned on its face as making no rational sense.

Gaitan also noted that the trial judge in 1997 acknowledged that there was no evidence that the defendants meant to lure the firefighters to their deaths, or that they had any idea that the fire would cause an explosion.

They should have considered that, Becker and the grieving families argued. But like it or not, the issue of whether Sheppard and the others actually meant to kill anyone that night has always been an issue in the case, at least from a legal perspective.

Gaitan could have stopped right there, but he didn’t.

The elephant in the room during the resentencing hearing was evidence that has been emerging since before the trial even ended that all five defendants, who have consistently denied guilt, could have been wrongly convicted.

Gaitan said from the outset, in his earlier rulings in the case, that he would not allow Sheppard’s attorney to go there. But in his order, Gaitan went there on his own.

He noted there was no hard evidence in the case, and that Sheppard has consistently maintained his innocence. In fact, when the government suggested that Sheppard should acknowledge his role in the crime if he wanted a reduced sentence, he refused to do so.

Indeed, Sheppard had said publicly that he would not admit to a crime he did not commit, even if it meant he would serve another 40 years.

Gaitan also found it noteworthy that there was a “lack of evidence regarding Sheppard’s participation in the crime” and that several of the witnesses who testified against him have since recanted.

Listen to the National ‘Reveal Podcast on the Case

The judge also relied on earlier court statements showing that the government’s case was built partly on a confession by defendant Darlene Edwards and numerous witnesses who testified that the defendants — in private conversations with them — had admitted their guilt.

Years ago, Edwards recanted that confession, which had been made in the face of serious drug charges arranged by government agents as part of their investigation of the larger case.

As for the numerous witnesses who claimed that Sheppard and the others admitted involvement in the crime, Gaitan noted earlier findings that they were inconsistent and offered few details about the alleged role of each defendant.

He could have added that many of those witnesses had strong incentives to adopt the government’s theory in the case. One of them got a sentence reduction of 25 years after he testified.

Some of those same witnesses would later tell The Kansas City Star that they were pressured to lie — an assertion that a two-year federal investigation would later question.

No undue pressure was applied, the government said in its final report on the matter in 2011.

However, that investigation would also identify two new suspects in the case — in addition to the five in prison.

The Justice Department says those two new suspects helped commit the crime along with Sheppard and the others. But government officials have consistently refused to identify them. And Gaitan denied a request from Sheppard’s attorney, Cyndy Short, to release an unredacted version of the report that names them.

The U.S. attorney here, Tammy Dickinson, has consistently declined to discuss whether those new suspects were investigated or to speculate as to why the defendants — all of whom were serving life sentences until Friday — would refuse to name them.

Her spokesperson reasserted that position just this week.

As for Sheppard, Friday’s decision will not allow him to reclaim his good name. Indeed, he had no claim on one until he went to prison and straightened out his life.

But at least he can say that a federal judge has finally acknowledged — sort of — that there’s a chance he may be innocent. And it only took 20 years.

— Mike McGraw examined the federal prosecution of the case in numerous articles for The Kansas City Star. He is now Flatland’s special projects reporter. Reach him at mmcgraw@kcpt.org. Follow his stories online at FlatlandKC.organd @FlatlandKC.

Demonstrations Moving to the Suburbs This Week

Marvin Francois: Scenes From a Life Lived For Others