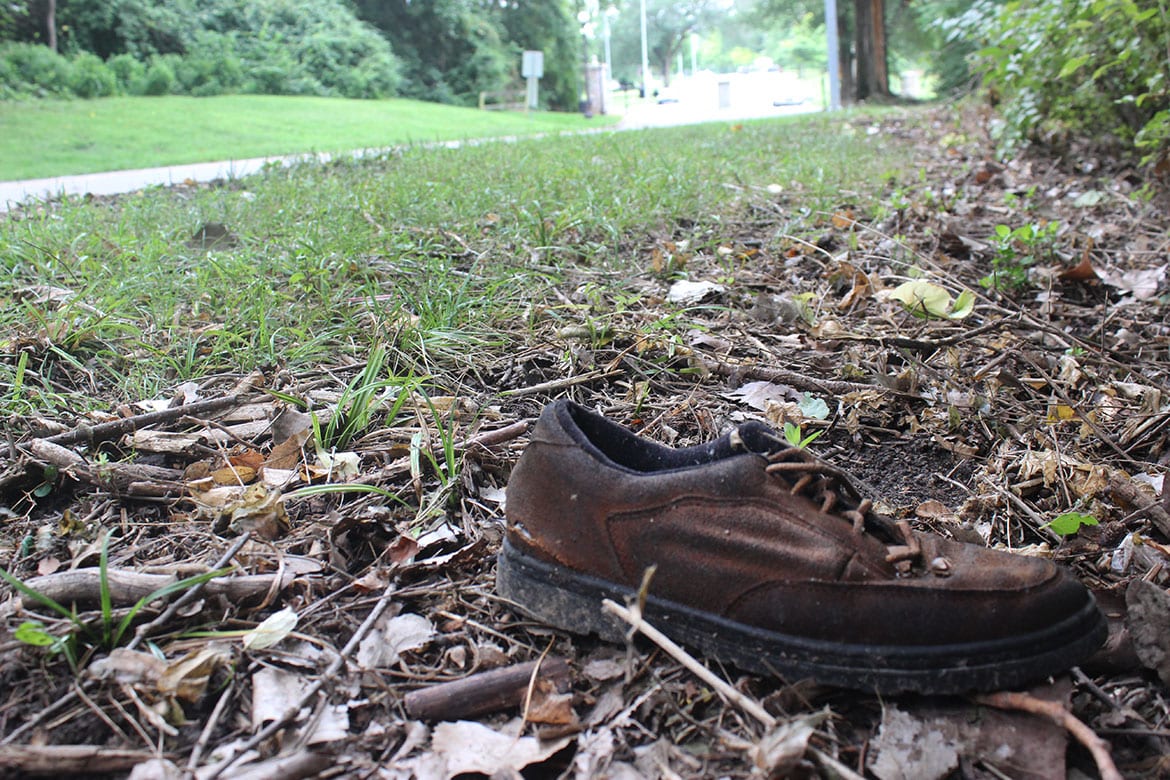 Cliff Drive, a state scenic byway, winds through Kessler Park in the northeast part of Kansas City, Missouri. Hidden in an under-visited area north of downtown, Kessler Park is the namesake park of George Kessler, considered to be the father of Kansas City’s parks and boulevards system. Cliff Drive runs the length of the park, bordered on one side with 40-foot cliffs. Open grassy areas and courses for rock climbing and frisbee golf are available for recreation. Bicyclists and joggers navigate the tight corners of the drive.

It sounds like a picturesque scene, but a closer look at Kessler Park reveals issues to be addressed: layers of trash from illegal dumping can be seen over the side of the cliff. Invasive honeysuckle covers much of the park. Cyclists and pedestrians share the winding road with cars.

The cumulation of these issues led Brett Shoffner, executive director of the Cliff Drive Corridor Management Committee, to file a petition on change.org, an international, web-based petition platform. Shoffner’s petition asks the city to permanently close the gates to Cliff Drive. The gate closure would prevent automobiles from accessing the road.

The petition gained community support very quickly. Andres March, the committee’s technical director, said 1,000 people signed the petition in the first 24 hours. The petition currently has around 1,500 signatures — much higher than Shoffner’s original goal of 100.

Shoffner said this road closure could return the park to its original glory.

“Originally, when George Kessler designed this… cars weren’t around,” he said. “This used to be a pedestrian and horse and buggy road, so people could come down here and enjoy it without the fear of automobile traffic, and that’s kind of what we’re trying to return it to.”

Forest Decker, superintendent of parks for Kansas City, said the city was taking the dumping issue at Kessler Park “very seriously” even before the petition.

Shoffner said he wrote the petition, in large part, to instigate a community dialogue.

“We want public support,” he said. “We don’t want to do this in a vacuum and just have the city tell people or have (the committee) tell people what’s best for them.”

The gates to Cliff Drive are currently closed Friday afternoon through Monday morning, Decker said. The park’s car-free weekends allow Kansas Citians to recreate safely, but do little to stop illegal dumpers. Decker said the city has tried closing the gates during different times of the week with little success.

“There’s not a lot of traffic on the drive; it’s not a major thoroughfare,” he said. “Even during the daylight hours, some people still feel comfortable dumping there.”

Kessler Park through the years

Trash has been accumulating in Kessler Park for hundreds of years, Shoffner said.

“We like to call (the area) an archaeological case study in human waste because there’s literally hundreds of years of layers of trash out here,” he said. “Really, before the 1950s, when they instituted regular trash pickup at people’s homes, people just got rid of it. And this is one of the places (where) it was easily out-of-sight, out-of-mind.”

Shoffner said that he thinks the majority of today’s dumping is coming from a small group of contractors, and looking at the trash buildup seems to support this: piles of wooden debris, air filters, roofing material and glass from windows have been cleared out by volunteers.

“But immediately after doing that, the next day after they left, there was more dumping,” he said.

Shoffner sees the dumping issues as a perpetual problem of perception: since there is already trash at Kessler Park, others see that as an excuse to dump more.

“If people see trash and know that they can dump trash there, it’s going to generate more trash,” he said.

Decker said he doesn’t understand the motivation for everyday dumping that happens at Kessler Park.

“… Kansas City has free trash removal and free bulky item pickup,” he said. “If you don’t want your washer or your dryer, you can make an appointment and we’ll come to your house and pick it up.”

The cycle of dumping off Cliff Drive has led to 5,422 volunteer hours cleaning up Kessler Park in the past 11 months. Shoffner said at least 1,000 of those hours were focused in one small area at the top of E. Lookout Point Drive. During a recent cleanup effort, Bridging the Gap, an environmental nonprofit in Kansas City, Missouri, helped to build a trail down a hill so volunteers could reach trash on the hill’s slope.

Even after that 1,000 hours, trash still remains on the steep slope.

“(The trash) was waist-deep on me when I first came through here,” Shoffner said. “It looks a lot better than it used to.”

These volunteers have also cleared honeysuckle — another invasive problem along Cliff Drive.

The honeysuckle covers much of the drive’s namesake cliffs and is choking the forest above and below the cliffs. The overgrowth is particularly bad now, since the park is lush and green at the end of this mild summer.

The abundant overgrowth also conceals some of the trash.

When asked why the city would allow so much trash — nearly 3,000 tires, for example — to build up, Decker said that the parks department didn’t initially realize the full extent of the problem.

“I don’t think that anyone really knew the extent until we really got down in the weeds, so to speak,” he said. “We started seeing some of this stuff that’s off of the cliff and off the drive that  you just really can’t see from the (road)…. It became a higher priority, for sure, at that point.”

Part of the city’s effort to deter dumping includes large boulders placed along the drive. The boulders prevent trucks from backing up to the drive’s edge and dumping trash off its sheer face.

“That’s obviously worked in those exact spots,” Decker said. “You can’t dump there. But, unfortunately, we have not lined the entire drive with large boulders, and people are very creative and seem to be finding new places to dump outside of areas where we’ve taken preventative measures.”

Another preventative measure has been the installation of cameras along Cliff Drive, but Decker said that this has been ineffective.

“We don’t have enough cameras to line the several miles of the drive,” he said. Cliff Drive is approximately 4 miles long, according to the city’s website.

It is because of these unsuccessful attempts to control the dumping that Shoffner suggests permanently closing the gates in his petition.

“We’d like to see it taken care of in a systematic way instead of just picking up the trash time and time again,” he said.

In order to find a solution, the committee is working closely with the parks and recreation department. Solutions proposed from both sides include the gate closure and closing just the lane adjacent to the drop-off and making the drive one-way. Because of the drive’s scenic byway status, the road must be open to vehicular traffic. Both Decker and Shoffner said that this requirement is open to interpretation and that they are working with legal teams to see if gate closure is even an option.

In the meantime, Shoffner said the committee will continue its efforts to clean up the park in earnest.

“We’re still going to march on with our organizing attempts to get community support for our project and for closing the gates at least temporarily so we can get… control of the illegal dumping,” he said. “Then we can re-clear the cliffs (of honeysuckle), open the forest back up and let people actually enjoy the natural beauty up here instead of seeing a dump.”

Video produced with assistance from Lindsey Foat and John McGrath.