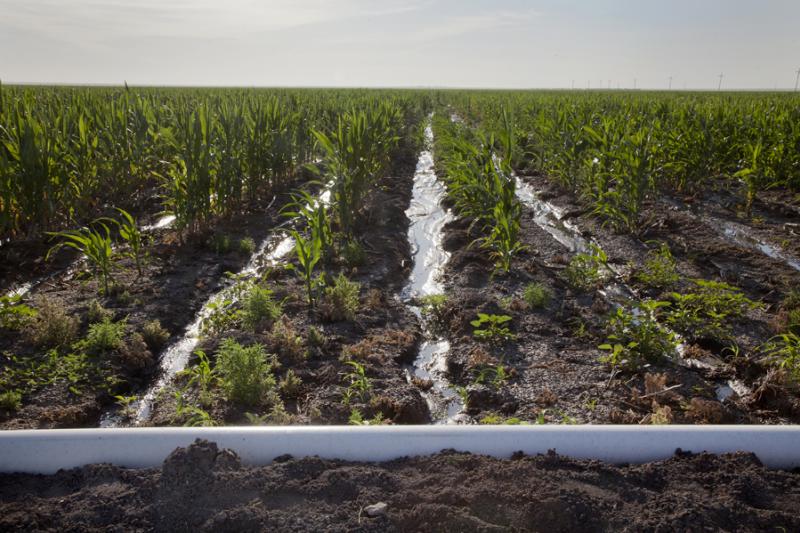 Irrigation accounts for about 85 percent of the state’s water use, according to the Kansas Department of Agriculture’s Division of Water Resources. All that water helps support the agriculture industry, which is a key component to the economy in parts of Kansas. (Photo: © Larry Schwarm)
Share this story

In mid-fall, trucks full of corn and soybeans rumble through the north-central Kansas town of Courtland on their way to the grain elevator at the south end of Main Street.

While neighboring counties struggle to survive, the western half of Republic County, including Courtland, population 273, isn’t doing too bad. Technology and insurance companies support the agricultural industry, and a new arts center has opened in one of the limestone-brick buildings downtown. There isn’t enough housing to accommodate everyone who would like to live in town.

Courtland sits in a part of Republic County that is blessed with the water that comes from the Republican River, said Dan Kuhn, one of the state’s largest wholesale growers of fruits and vegetables.

Kuhn sells his watermelons, pumpkins and tomatoes to grocery stores in Kansas, and from a roadside market on U.S. Highway 36 just north of Courtland. The town is doing well, he said. Kids who grew up here are moving back to start their own families.

But travel a few miles east or west, where the water isn’t plentiful, he said, and the story changes. Those communities are literally drying up without resources that draw businesses and people.

“Follow the water, and you’ll see which towns are doing well,” he said.

Courtland isn’t representative of every rural community when it comes to water. In fact, there may not be a single place that can capture every issue related to water and agriculture in Kansas.

The “A Long-Term Vision for the Future of Water Supply in Kansas,” produced by the Kansas Department of Agriculture and the Kansas Water Office, outlines the various issues that Kansans face related to water.

In the western part of the state, the declining resources of the High Plains/Ogallala aquifer, as well as other groundwater sources, dominate the discussion. In eastern Kansas, reservoirs designed to store water to supply cities, industry and agriculture are filling with silt, reducing their storage capacity.

The area around Courtland doesn’t experience these problems. Its greatest challenge is ensuring that users upstream in Nebraska leave enough water in the Republican River as it meanders south and east across Kansas — even turning to the U.S. Supreme Court in recent years to uphold a water use compact agreed to by the two states.

But if there is an example of what can happen with a local economy where water is clean and adequate, perhaps there is a case to be made for Courtland.

Hard to compare urban and rural
Courtland is home to the Bostwick Irrigation District, which provides water to 350 farmers who irrigate crops in Republic and Jewell counties in north-central Kansas. The district diverts water from the Republican and delivers it to its member farmers through a series of canals and pipes. Dan Kuhn is one of the state’s largest wholesale growers of fruits and vegetables, thanks to a healthy water supply in Republic County from the Republican River. (Photo by Sarah Green)

Grain crops bring in $29 million to the irrigation district, Nelson said. That money then circulates in the district’s towns of Courtland, Scandia, Belleville and Mankato — with as much as a sevenfold impact, he said — and in regional hubs like Concordia and Salina.

“Irrigation has made it a little simpler for people to have a better income,” he said.

It’s not easy to draw parallels between water use in cities and farmland irrigation, said Republic County farmer Warren Sutton.

“I don’t think people in cities understand what we go through,” he said.

A few years ago, drought affected everyone living in north-central Kansas. Irrigators, Sutton said, had to stop watering their fields — putting their yields at risk. People living in Salina were encouraged to water their lawns less frequently.

“I don’t think they are sensitive to our livelihood,” he said. “A brown yard doesn’t have the same economic impact as it does when you can’t irrigate your crops.”

Irrigation accounts for about 85 percent of the state’s water use, according to the Kansas Department of Agriculture’s Division of Water Resources.

When Republic County farmers are doing well, Sutton said, the whole state benefits — especially urban shopping areas, where the farmers and their families spend their money on clothes, food and entertainment.

“I am not sure people who live in cities appreciate how much more the economies of Salina, Manhattan and Wichita benefit” from the farm economy, he said.

Water powers industry
According to research conducted by Kansas State University using the 2012 U.S. Census of Agriculture, the top eight Kansas counties for market value of agricultural products are on top of the Ogallala aquifer in southwest Kansas.

These eight counties — Scott, Haskell, Finney, Gray, Grant, Ford, Wichita and Seward — together sold more than $6.3 billion in crops and livestock, or slightly more than one-third of the state’s total agricultural revenue. The counties have been identified as a “grand challenge” for research at K-State focused on water-saving technologies.

Grain commodity crops, such as corn, use water from the aquifer. So do the dairies and the feedyards that dot the gently rolling landscape.

“I don’t think they are sensitive to our livelihood. A brown yard doesn’t have the same economic impact as it does when you can’t irrigate your crops.”  – Republic County farmer Warren Sutton

The real economic impact here is from the “multiplier effect,” an economic term to describe the worth not just of the grain crops themselves but of the industries that process the raw commodities, said Josh Roe, assistant secretary of the Kansas Department of Agriculture.

“When you look at the industries down the line that exist in Kansas because of the commodities produced in the state, that’s where you get a lot of economic activity,” he said. “It’s about getting people to look beyond what the value is at the farm gate — to look at the jobs that are created and value we add to a lot of products. Then those people go out and spend money at local businesses, which supports local communities again. It’s all part of that multiplier effect.”

The Kansas Department of Agriculture, which oversees the appropriation of water to farmers, ranchers, cities and industry, and the Kansas Water Office, which is the state agency responsible for long-term water planning, have worked with more than 13,000 Kansans since the end of 2013 to build the long-term vision for the state’s water supply, said Kansas Agriculture Secretary Jackie McClaskey.

The economic relationship to water has been at the center of the discussions.

“When you really look at the long-term economic impact, thinking about what’s the economic potential of water 50 years ago, or, more importantly, the cost of not having water 50 year from now, it’s easier than when you’re looking at things one day at a time,” she said.

“It’s a very difficult problem to solve. It’s why we have to look over a long time frame and find a balance of supporting economic growth while still conserving resources in the best way possible.”