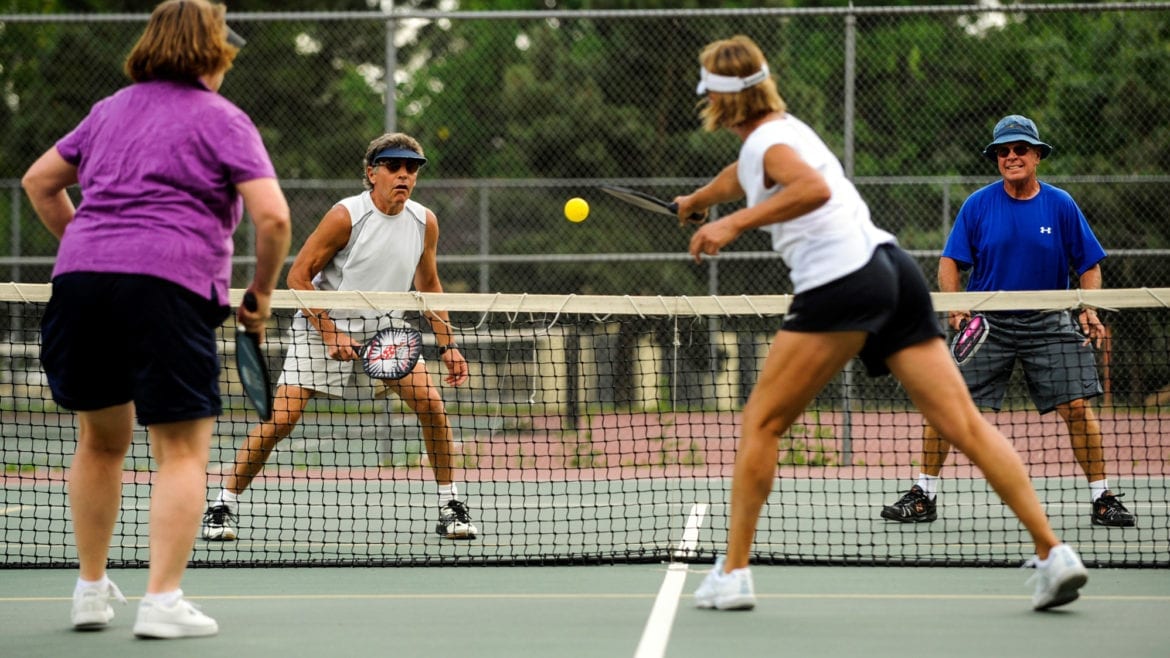 Val Olson (from left), Rick Kamm, Steve David and Dee Haskins play up to the net during a pickleball game at Monument Valley Park in Colorado Springs, Colo., in 2011. (Photo: Colorado Springs Gazette)
Share this story

It’s a bright fall morning in Santa Cruz County, Calif., and the tennis area at Brommer Street Park is overrun with dozens of people. But they aren’t here for tennis. Instead, cadences of pick-pock sounds fill the air as doubles players — many in their 50s and older — whack yellow Wiffle-like balls back and forth on eight minicourts.

This recreational craze, which has an estimated 2.8 million players nationally, has a quirky name: pickleball.

I stumbled across the game last summer, when I started coming to this park to hit the tennis balls around with my dad, who’s still nimble at 87.

Could this upstart racket sport, I wondered, be something my elderly father and I could enjoy together?

My dad has played tennis for fun, for most of his life, but he’s out of practice and slowing down. And with my bum knee and elbow tendinitis, I haven’t played much tennis since high school. He’s still better at the game, though I’m quicker on my feet; we both spend a lot of time trudging around to retrieve wayward balls.

Easy to learn, and feels gentler to joints than tennis

The ball is lighter than a tennis ball, the paddle shorter and there isn’t as much running back and forth. But the moderate exercise and social nature of the game keeps participants coming back. New research suggests that taking up pickleball as a serious form of leisure can enhance mental health and well-being in older adults.

Pickleball was born as a cross-generational game in 1965 when three dads in Washington State invented it to entertain their kids.

It’s easy to learn, and — this is key — with less ground to cover on a smaller court, “it’s not that hard on the joints,” says Drew Wathey, director of recreational programs at the USA Pickleball Association. It can be a great alternative to tennis as we get older, or for anyone nursing overuse injuries from other sports.

The beauty of the game is that it can be enjoyed at any level of intensity, says Karen Long, a 57-year-old nurse who is president of the Santa Cruz Pickleball Club and a USA Pickleball “ambassador.” Even sedentary seniors can safely be taught an easy doubles game, she says, starting with dinking the ball back and forth at the net.

And though anyone can play it, Long says, “it takes a long time to perfect.”

Pickleball was invented by three dads to entertain their kids

Strategy and finesse are more important than driving the ball hard. Much of the game is played in quick-paced rallies up at the net, where an artfully dropped “dink shot” can win the point. That’s why the sport lends itself well to intergenerational recreational play; older players can hold their own against young ones.

Can be a good cardio workout for people with overuse injuries

And it can be a good cardio workout, says Molly Smith, a 65-year-old exercise science professor at Weber State University, near Salt Lake City, Utah, who both plays and studies the game. Even if you’ve had shoulder or knee injuries, she says, “you could still probably play a pretty competitive game of pickleball doubles and get your heart rate to the high end of the moderate-intensity exercise zone.”

That’s according to a preliminary study that Smith and colleagues conducted in a dozen middle-aged, novice and intermediate pickleball participants: Across 30 minutes of doubles play, their heart rates increased to an average of 117 beats per minute, with a peak rate of 140 — comparable to, say, fast ballroom dancing. And they burned 40 percent more calories than during a half-hour of walking.

Injury risks from pickleball have yet to be systematically investigated, she says, when I ask about potential impacts on achy and aging joints.

Even on a pickleball court, quick changes in direction while chasing the ball could put stress on the knees, notes Matt Denning, a sports biomechanics specialist at Brigham Young University’s Idaho campus. For those with prior knee problems, he says, certain types of knee braces may help.

Long, the nurse and pickleball aficionado in Santa Cruz, tells me pickleball has been gentler than tennis on her elbow, which she seriously injured five years ago as a competitive doubles player. She now competes in national pickleball tournaments instead.

But the exercise may not be the best part of the game.

“It’s very social,” says Dave Witte, treasurer for the Santa Cruz Pickleball Club, which welcomes beginners. The game seems to me more casual than tennis; because anybody can pick it up pretty quickly, that maybe increases the friendliness factor.

“You get that whole camaraderie thing going,” Witte says.

That’s especially important for retirees, he says, because “as you grow older, the last thing you want to do is become isolated.”

Researchers have noticed the camaraderie, too, and have started examining the psychosocial benefits of the sport. In a study published this month in the Journal of Positive Psychology, investigators from Texas A&M University and Florida State University surveyed 153 participants, ages 51 to 85, at pickleball competitions.

The more deeply engaged in pickleball these enthusiasts were, the more likely they were to be highly satisfied with their lives and have a positive experience with aging.

Meanwhile, back at the park in Santa Cruz, spirits are high among the 50 people gathered to play pickleball on a weekday morning, some chitchatting in lawn chairs as they wait their turn. My dad sizes up the scene and opts to just observe the game, for now.

Long hands me a loaner paddle, and she and a friend graciously instruct me in the basics.

I’m matched up with two other beginners — Caroline Nicola, a 48-year-old massage therapist, and her mother, Heide Nicola. It’s Heide’s 75th birthday, and pickleball looked like “a fun new activity to try out together,” Caroline says.

At first, I’m whiffing like a cartoon character on many shots. Ouch. My coordination is off because the plastic ball isn’t as bouncy as I expected, and the racket is shorter than I’m used to. But the learning curve seems pretty quick. Dad, watching from nearby, is amused.

Fast forward one week: We’re back at the park, and my father says he’s ready to give pickleball a try, too. As two regulars kindly coach us in doubles, I watch Dad grapple with the same frustration of missing his shots.

“Keep your eye on the ball,” one instructor tells us. After an hour of practice we’re both getting better.

Dad still isn’t ready to trade-in his tennis racket, but I’m hoping that with a few more pickleball sessions, he’ll change his mind. I, meanwhile, can see how the game could become an addiction, if my joints hold up. So far, so good!

We’ll be out there again.

COVID-19 Clamps Down Even in the Great Outdoors

Here to Help You Play (Virtually) in a Pandemic

Age of Coronavirus: Swooping from the Swiss Alps to Sitting on the Couch