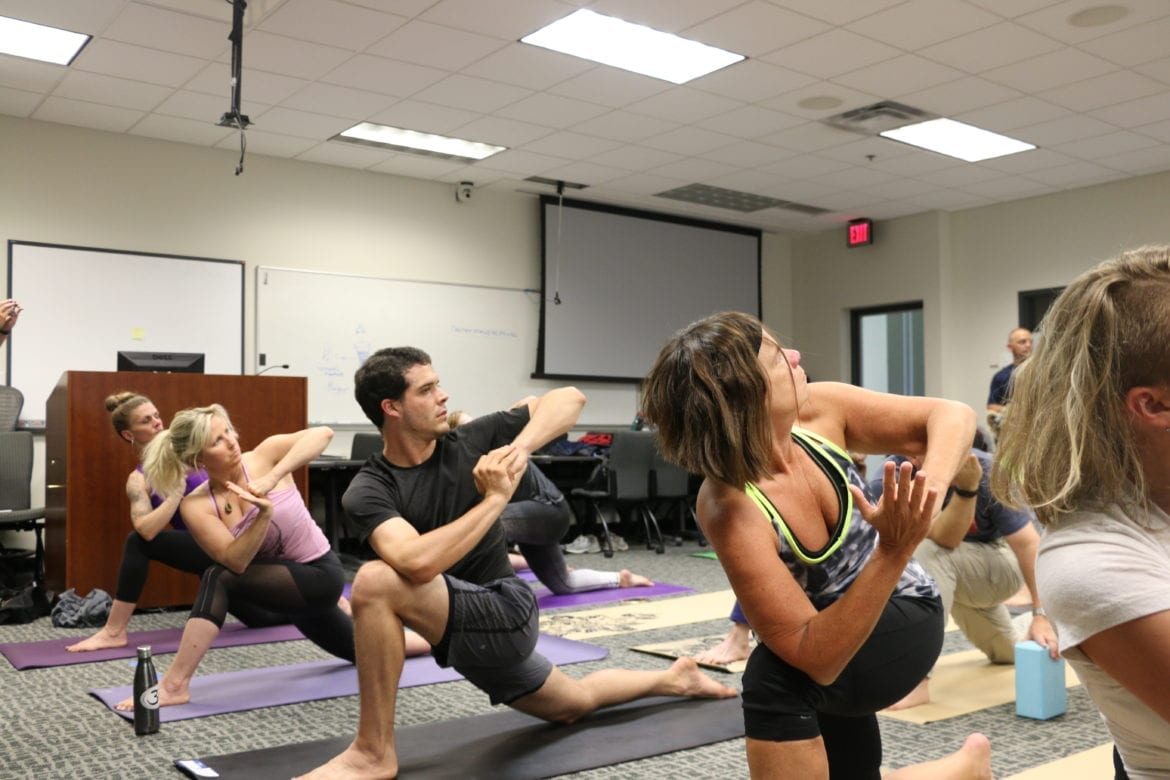 With legs bent like sprinters in starting blocks, arms thrust forward and necks twisted toward the fluorescent lights of the Kansas City Missouri Police Academy, a group of first responders was focusing on breathing and forgetting about work.

In the world of emergency response, people are beginning to realize that victims and their families are not the only ones scarred by accidents and violent crime. The helpers themselves can suffer what is now known as “secondary trauma” from the stresses and gruesome details that accompany their jobs.

That’s something Capt. Darren Ivey knows firsthand as commander of the police department’s Crisis Intervention Team, which specializes in handling situations in which mental illness might be a contributing factor.

And that’s why he was among the group of emergency personnel at the academy that June evening, practicing what he preaches about trauma-sensitive yoga, which includes explanations of the brain science behind secondary trauma. Police officers might see as many as 500 dead bodies during their careers, he said, which they might shrug off as part of the job.

“We want to explain to them that what they see on a daily basis is not normal,” said Ivey, who last year helped Truman Medical Center launch a four-hour training curriculum for the department on trauma-smart practices. “Our reaction of feeling like, ‘This is crappy.’ … We’re telling people that’s a normal reaction; we encourage you to talk about that.”

Yet the police department’s efforts are just one piece of a much larger effort underway in the city, financed in part by a $300,000 grant from the Robert Wood Johnson Foundation and The California Endowment.

The initiative is known as Resilient KC, which is a partnership between the Greater Kansas City Chamber of Commerce and Trauma Matters KC, a coalition of more than 30 organizations, including mental health centers and philanthropies.

One way to think about that approach, according to practitioners, is to rephrase the question, “What’s the matter with you?” to “What happened to you?”

The initiative launched in April, and a key focus is alleviating childhood trauma, known collectively as adverse childhood experiences, or ACEs, which can range from sexual abuse to living in a household where substance abuse or mental illness is a problem. The federal Centers for Disease Control and Prevention recognize these as a serious issues because of their link to risky health behaviors later in life and early death.

In July, Resilient KC began an ACEs survey to gauge the amount of trauma experienced by youths in the community. The higher the score, the more traumatic one’s childhood was, and thus the more likely the person is to experience negative health effects.

Once the data is in, Resilient KC will look to see whether there’s a demographic with higher ACE scores. A separate survey will be available to gauge participants’ resilience.

Recognizing the fundamental impacts of ACEs represents nothing short of a revolution in thinking about mental and physical health, said Dennis Meier, chair of the Resilient KC steering committee and associate executive director of clinical services at Synergy Services, a Parkville-based nonprofit serving victims of abuse and neglect.

“You don’t stop at recognizing the impact of trauma or the cost of trauma,” he said. “In fact, the antidote to having been traumatized is that, with some help, you can become even stronger and more resilient. That’s at the heart of Resilient KC — to understand the impact of those types of experiences,” Meier said.

While much of the focus is on children and their adverse experiences, Resilient KC is trying to tackle the impacts of trauma across age groups based on five subsets: armed services, business, education, health and justice.

“You can ask, ‘Will this change the way a doctor treats a person?’ Maybe, maybe not, but for that physician to ask the question begins the process of looking at whether that history makes a difference,” Meier said.

Ivey, the police captain, is the co-chair of the justice committee.

By the end of the summer, he wants to include the community in trauma-sensitive yoga, envisioning sessions everywhere from the local police department to a park. 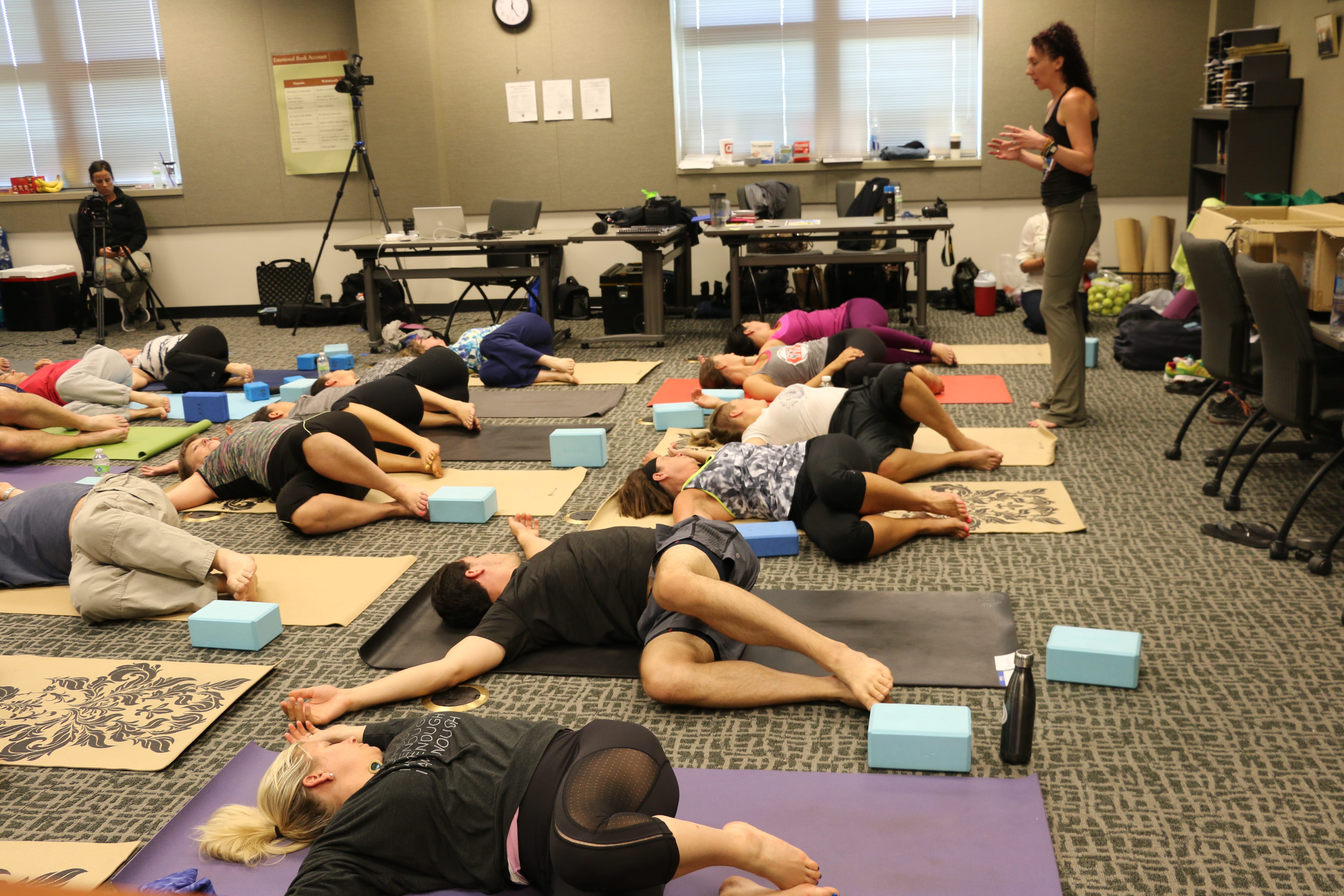 Even though Ivey and the department have been implementing trauma-smart practices, he said the ACEs survey results will solidify some of their practices and point to areas they could improve upon.

In addition, Ivey said the increased emphasis on trauma-sensitive practices also can limit some of the trauma inflicted by police officers.

“It’s not our fault. It’s our job,” he said. “We take mommy and daddy away, we tell mommy and daddy their son’s dead, we tell the family that they’re going to lose their children, we take the children out of the house. Since we’re already causing trauma, if we can do that in a way that’s sensitive, then maybe the trauma may not be as long-lasting or severe.”