Official reports about the shooting of Ryan Stokes raise more questions than answers. Here’s why 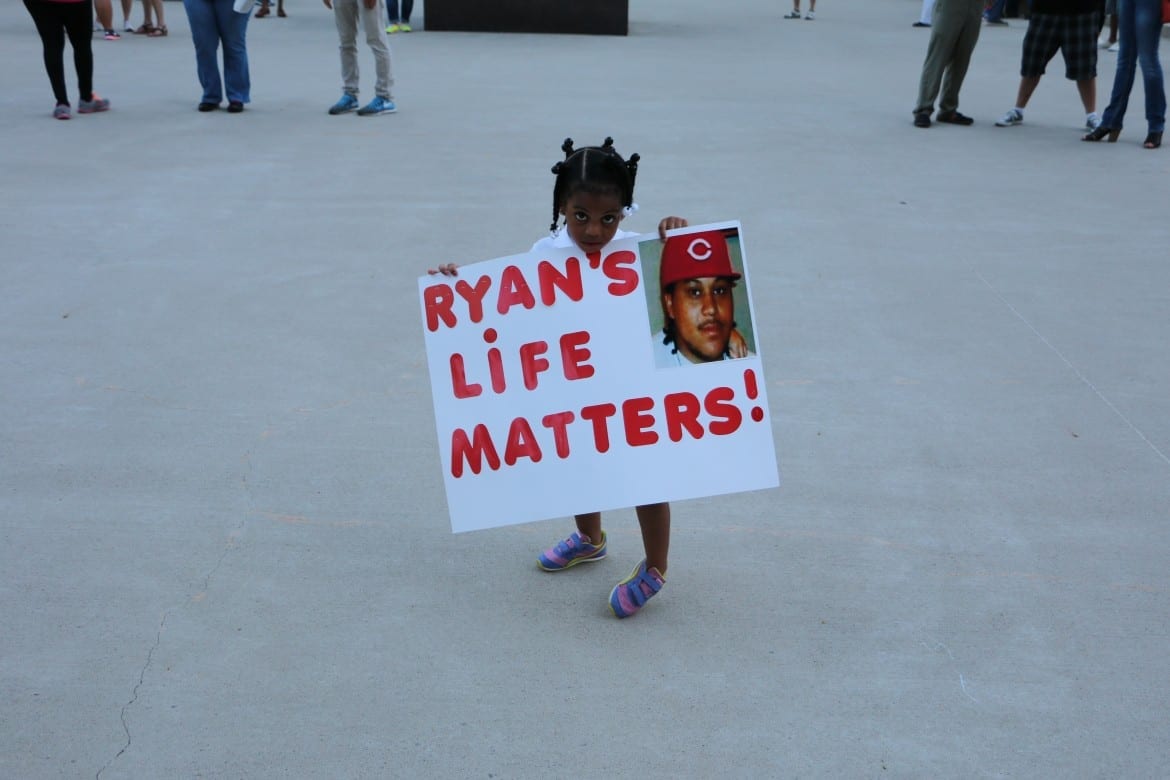 Last weekend, almost two years later, supporters at a candlelight vigil on the steps of City Hall demanded justice for a person they say was wrongfully killed by police. Cyndy Short, the Stokes family’s attorney, has yet to file a lawsuit against the Kansas City Police Department, but says that time is coming.

For now, the candlelight vigil is part of a “restorative justice campaign” to reclaim Ryan Stokes’ good name. Short and others portray Stokes as a loving father, a good son, and a church-going basketball fan with no criminal record.

So what happened that night? No one may ever know for certain. But the official record raises many questions for Stokes’ family, and ultimately, for the KCPD.

What Happened That Night

After midnight on July 28th, 2013, Ryan Stokes and Ollie Outley drove in Outley’s red Monte Carlo to the Power & Light District. They parked off of McGee St., which runs north and south between 12th and 13th streets.

There they met up with friends and spent the next two hours walking the perimeter of Power and Light, hanging out, and talking with acquaintances. Friends describe the group as being in good spirits, having a good time.

At 2:30 a.m. when the bars closed, patrons poured out onto the sidewalks. Stokes stood with Outley and others, all of whom are African-American, at the corner of 13th Street and Grand Blvd.

A group of five white males, including Jordan Miller, 21, emerged from a nearby bar at Power & Light.

Miller would later tell police he and his friends were extremely intoxicated.

They looked for a taxi cab big enough for all five, when Miller realized he had lost his cell phone. He accused Outley of taking it.

While Miller acknowledged later that he thought he must have dropped the phone on the sidewalk– and that he had never physically seen Outley holding his phone–he accused Outley at the time of taking it.

Miller yelled at Outley to give him his phone back. Outley denied having it. A shouting match ensued.

As the altercation escalated, surveillance video shows Stokes stepping in to act as peacemaker. No punches are thrown, but the yelling and shoving attracts the attention of Police Officer Albert Villafain.

Villafain, who was working Bike Patrol that evening, called for order. When the fight continued, he pepper sprayed the crowd, and people took off in all directions.

According to Outley and other witnesses, pepper spray got into Outley’s eyes. He gave the keys to his Monte Carlo to Stokes and told him to go get the car.

The video shows both of Ryan Stokes’ hands, and they appear to be empty.

According to police reports and surveillance video, Jordan Miller starts following Stokes. He then tells Villafain that Stokes or someone with him took his cell phone.

Villafain asked Miller if he could make a positive identification of the thief. Miller said he could. Villafain signaled another Police Officer, Daniel Straub, to assist in the pursuit of the two suspected phone thieves.

All three took off after Stokes.

They ran right past Outley, who had originally been accused of stealing the phone.

Stokes turned left off of 13th St. and headed north on McGee with police in hot pursuit.

Stokes headed towards the entrance of the parking lot, which is off of McGee St. about 200 feet.

Villafain and Straub arrived at the corner of 13th and McGee and turned northbound on McGee. At this point, Villafain radios police dispatch.

“In a foot chase, Northbound on McGee towards 12th, suspect of a stealing,” he said.

Ten seconds later, another call came in from Villafain.

According to police reports, officers Villafain and Straub ran over and found Stokes in a fetal position next to Outley’s Monte Carlo on the west side of the parking lot, in a pool of blood. He had been shot multiple times.

“Did he have a gun?” one of the police officers yelled at Thompson.

They pulled Stokes’ arms back to handcuff him and saw that he was unarmed. Stokes was holding Outley’s car keys and his flip phone.

Moments before the shooting, Thompson and his partner, Officer Tamara Jones, were standing at the 12th St. entrance to the parking lot, some 90 feet from Outley’s Monte Carlo, when Villafain’s first radio dispatch came through notifying area police they were in a foot chase.

According to Thompson’s statement to police later that evening, after he heard Villafain’s radio dispatch he entered the parking lot off 12th St. and saw Stokes come into view.

“He was holding a gun in his right hand, and it was bigger than my Glock 23,” he told investigators.

“I drew my gun and told him to drop his gun. He ran to the Monte Carlo and he opens and shuts the door. I kept ordering him to drop the gun and show me his hands,” he stated.

After Stokes was found to be unarmed, Thompson opened Outley’s Monte Carlo and found a gun, a .22 caliber Glock pistol.

Thompson said he found it on the driver’s seat. He said Stokes must have dropped it on the front seat when he opened and closed the door.

Police secured the crime scene, and arrested Kenny Cann for illegal possession of a firearm. Police later determined Cann had tried to hide a different gun under a car after Villafain and Straub closed in.

Ryan Lee Stokes died before he reached the hospital.

Later, a Jackson County Grand Jury found the shooting to be justified.

The Stokes family attorney Cyndy Short said it would be easy to dismiss Ryan Stokes as another thug with a gun who got what he deserved.

In fact, multiple media outlets dutifully reported the next day what the police had told them: that an armed man accused of theft refused to drop his gun and police were forced to shoot him.

“The Certificate of Commendation was presented to Officer Tamara Jones and Officer William Thompson for their dedication and commitment to the performance of their duties. While working in the Power & Light District Officers Jones and Thompson encountered suspects who were being pursued by other officers. One suspect had a handgun pointed in the direction of the pursuing officers. Officer Jones and Thompson drew their weapons and told the suspects to drop their weapons and get on the ground. One of the suspects refused to drop his weapon and Officer Thompson was forced to fire his weapon at the suspect, fatally injuring him and ending the threat to all officers involved.”

This official report is troubling on a couple of fronts. At no point did Thompson, or Jones, or any other police officer that evening, tell investigators that they saw Ryan Stokes point a gun at anyone.

A police spokesman later said that the commendation does not reflect the official investigation into the shooting.

“In Ryan’s case, the police created a false narrative very quickly about Ryan’s death and they put it into the newspapers,” Short said at a memorial for Stokes this past weekend. “And people accepted that.”

Ryan Stokes’ mother, Narene, said the police flat out lied to her.

“The police came to my house the next day a dozen deep,” she said.

“And they told me Ryan had been shot four times in the chest. I went down to the morgue and looked at his body myself. I am his mother, you know, so I look all over him. And he was shot from the back. Why would they lie to me? He was my baby, he was my son,” she said, fighting tears.

One fact that no one disputes: Ryan Stokes was unarmed when Thompson pulled the trigger, and Thompson himself acknowledges that.

However, the real question remains: Did Ryan Stokes ever have a gun?

Eyewitness testimony is inconsistent. Other than Thompson, who fired the shots, no other police officers saw a gun in Ryan’s hands, according to police interviews.

Officer Thompson said that he saw Stokes come around the corner of a building in the parking lot with a large gun in his hands. He said he observed Stokes run up to the Monte Carlo, open the door, shut it, and take off in the direction that he had come. Thompson said he assumed Stokes still had the gun as he turned back towards Villafain. After multiple commands ordering Stokes to drop the gun, Thompson fired his weapon two to three times.

A recent visit to the scene shows the parking lot at night is extremely dark. There are no lights that illuminate the pavement between the Monte Carlo and Thompson’s original position. A flip phone and a set of car keys found in Stokes hands could be mistaken for a gun from 90 feet away in the dark.

The timing is also a question mark.

There are only 10 seconds between the time that Villafain radios police dispatch about a foot chase involving a “stealing” and Thompson firing his weapon.

But the Hale Center’s re-creation of Thompson’s account raises questions about whether it all could have occurred in that time frame:

Running around the building, to the exact parking space where the Monte Carlo was, opening the car door and shutting it, taking off the other way, ending where Ryan Stokes was shot– took a minimum of 14 seconds at a full sprint.

Another piece of the puzzle is the gun itself. The gun Stokes allegedly dumped inside Outley’s car belonged to Outley. It was registered in Outley’s name, and Outley had a conceal- and- carry permit.

Outley told investigators that prior to heading to Power & Light he had left his gun in the Monte Carlo between the console and the seat, pointed down. Outley said that at no time did Stokes ever have Outley’s gun on him that evening.

In surveillance video of Ryan Stokes 25 seconds before the shooting, his hands appear to be empty.

Investigators took DNA samples from the gun but never tested it, they said, because the Grand Jury had already cleared Thompson of the shooting.

Whether Stokes’ fingerprints or DNA were on the gun was apparently not viewed as an important piece of evidence when presented to the grand jury.

As a result, no one knows for sure if Stokes ever handled the gun.

It is possible Stokes had the gun, and Outley didn’t know he took it.

It is possible that Stokes had the gun and Outley knew it.

It is also possible that Thompson caught a major break when he opened up the Monte Carlo.

Two facts are unavoidable. Ryan Stokes was unarmed when Thompson shot him, and police still defend the shooting.

KCPT’s John McGrath produced the video with this report.

Correction: Narene Stokes’ name was misspelled in the original version of this story.