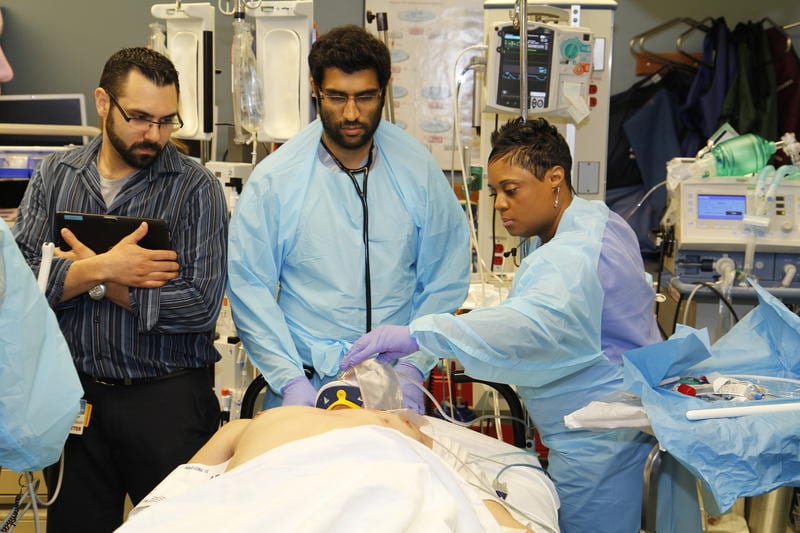 It’s a sweltering Monday afternoon, and in the emergency room of Truman Medical Centers near downtown Kansas City, a patient complains of excruciating abdominal pain.

The attending physician advises her there’s only so much he can do.

“The reality is you can get whatever pain medication I’m able to give you in an effort to get rid of your pain so we can try to figure out what’s going on in your belly,” he says.

“Of the 41,000 who are uninsured that we care for, we estimate that at least three fourths of them would be covered if Missouri were to expand Medicaid,” says Charles Shields, president and CEO of Truman.

“That would have a dramatic impact on that $139 million of uncompensated care. It would probably reduce that significantly over $100 million worth.”

Shields is a former Missouri legislator who served in the Missouri House and Senate for two decades. He worries that if Missouri doesn’t expand Medicaid, Truman will find itself in precarious shape.

“If you look at the impact on hospitals like Truman across the country, if that were to happen, then there is a tremendous gap in our ability to pay for uncompensated care,” he says.

He’s hopeful but also pragmatic. Obamacare is highly unpopular in Missouri and 2016 is an election year. Shields calls the prospects for Medicaid expansion “challenging.”

“We have to be very realistic about what the future looks like for us,” Shields says, “and start to craft the solutions about the safety net that may not involve Medicaid expansion.”

Expansion would add about 300,000 Missourians to the Medicaid rolls. Right now, about half of them fall into what’s known as the “coverage gap”: They make too much money to qualify for Medicaid but too little to qualify for marketplace subsidies.

“It’s unfortunate because people will only continue to get sicker and continue to put off meeting their health care needs until they’re in a crisis, and then they will have a higher disease burden and will use a more expensive care setting such as the emergency room,” says Hilda Fuentes, president and CEO of Samuel U. Rodgers Health Center, which sits a few miles northeast of Truman.

Like Truman, many of Samuel U. Rogers’ 25,000 patients are uninsured – about 40 percent to be precise. A lot of them would qualify for Medicaid if it were expanded.

But Fuentes has all but given up hope that will happen anytime soon.

After the Supreme Court ruled in June that subsidies are available to people buying insurance on the federal exchange, some experts thought states resisting Medicaid expansion would bow to the inevitability of Obamacare and reverse course.

Dr. Georges Benjamin, executive director of the American Public Health Association, is one of them. He’s convinced that states like Missouri and Kansas will eventually fall in line.

“I’m very optimistic. If we learn anything from history, it’s that it took 17 years to get all states involved in the Medicaid program before, and the incentives are better this time,” he says.

“So jobs, economics, health care quality, doing the right thing – I think state policymakers will see the light and expand Medicaid in all the states,” he says. “And it will be a whole lot faster than the 17 years it took us to do it last time.”

Still, because the Supreme Court ruled in 2012 that Medicaid expansion is optional, not mandatory, many hospitals in states that have not expanded Medicaid now find themselves in a financial pickle. They face cuts in federal reimbursements but not the anticipated increase in paying patients to offset those cuts.

“What we’re seeing, as what was predicted several years ago, we have already seen over 2,000 Missourians that work in Missouri hospitals and health centers lose their jobs,” says Dave Dillon, vice president of the Missouri Hospital Association.

Truman’s emergency room sees an average of 175 patients a day. Many if not most of them don’t have health insurance.  Shields, the hospital’s CEO, says that’s O.K. It’s part of Truman’s dual mission as a safety net and teaching hospital. But he frets about what the future holds in store.

“What we provide at Truman is this rational, low-cost approach to providing care for the uninsured and that makes the hospital system not just in Kansas City but the system in Missouri better,” he says. “And you have to continue that, and we have to figure out a way to work with policymakers to make that happen.”

Time may be running out. 2016 is the last year the federal government will pay for 100 percent of expansion costs. After that it will pay for no more than 90 percent. Shields, the onetime Missouri lawmaker, says he’s confident the Legislature will come up with a solution.