Using Partnerships and Local Leadership, the Marlborough Community Revitalizes from Within 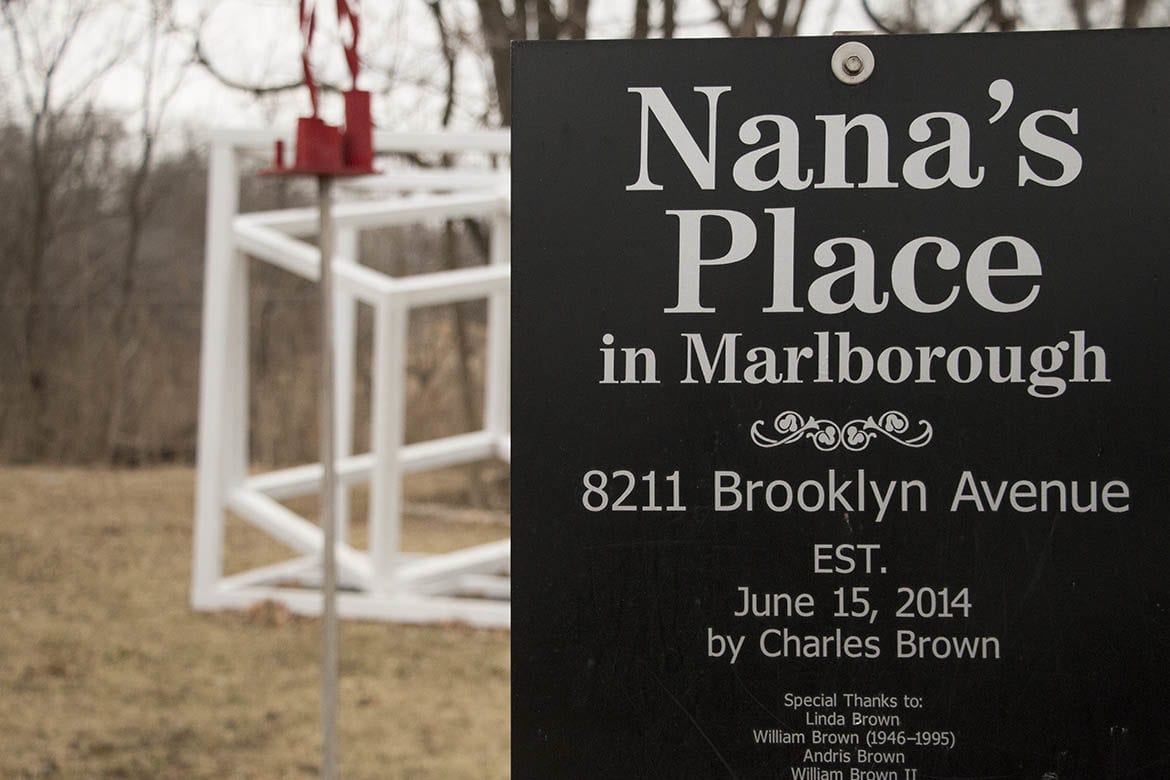 The story was accompanied by a message: “Change can happen!”

In fact, a different kind of change already is happening in Marlborough, the long-struggling portion of Kansas City roughly bounded by Gregory Boulevard and 89th Street and Troost Avenue and U.S. Highway 71.

Whereas Beacon Hill is grappling with worries that homes costing half a million dollars or more will price out residents of more modest means, Marlborough is celebrating an uptick in home renovations by responsible investors and:

The experiences of these two areas offer differing road maps for neighborhood revitalization, with Marlborough leaders preferring an “improve from within” strategy.

Brenda Thomas, whose hard work and relentless advocacy helped build the Marlborough Community Coalition into a force, doesn’t hesitate to bring up the “G-word.”

“I’m not against gentrification,” she said. “But I know all about the issues they’re having in Beacon Hill. I like the pretty houses and all that. But it’s almost like dragging a suburb into the middle of the urban core.”

Diane Hershberger, also a longtime board member of the community coalition, thinks change is inevitable in Marlborough. “We have development coming down Troost,” she said. “We know that the things we’ve been doing here are going to attract investors, and that’s good. But how do we avoid the gentrification problems that put people out (of the neighborhood) and create racial issues and all of those things?”

If any part of the city is prepared to control its own destiny, it is Marlborough.

Nine years ago, a merger of five neighborhoods formed the Marlborough Community Coalition. Led up until January by Thomas, a former labor relations manager and human resources director for the Kansas City school district, the group has adroitly formed partnerships and worked with city government to get things done.

Before now, you’d have to look back all the way to the 1930s to find optimism in Marlborough. That was when a streetcar line carried workers from downtown to the new homes that were springing up in southeast Kansas City, some of them quite elegant. But racial difficulties and the flight to the suburbs exacted a toll in the decades after World War II.

Today the Marlborough Community Coalition encompasses an area with about 10,000 residents, 75 percent of them African-American. The median household income is just under $24,000, according to census data compiled by the Conservation Fund, which is involved in projects in the area.

Can You Improve an Area Without Gentrifying It?By Anne Kniggendorf As a traffic engineer, Jay Aber worries that some of the improvements he designs have the exact opposite effect of what he had hoped. “We try to improve the street for the people who live there,” Aber…

“Marlborough has a lot of surprises, both good and bad,” said Hershberger, a civil engineer and organic farmer who moved into the neighborhood in 1997. “It has some real gems and treasures, but it’s a combination of neighborhoods that has had significant disinvestment since the 1960s and ’70s.”

Housing blight is the biggest problem. Drive around Marlborough, and you’ll find blocks where tidy, well-kept homes share space with abandoned, falling-down structures and yards littered with tires, auto parts and other junk.

The problem is especially acute south of 79th Street, where houses are smaller and absentee ownership is prevalent. About 60 percent of Marlborough’s housing is rental.

The community coalition realized early on that it needed expertise beyond the scope of its volunteer members to tackle big problems. 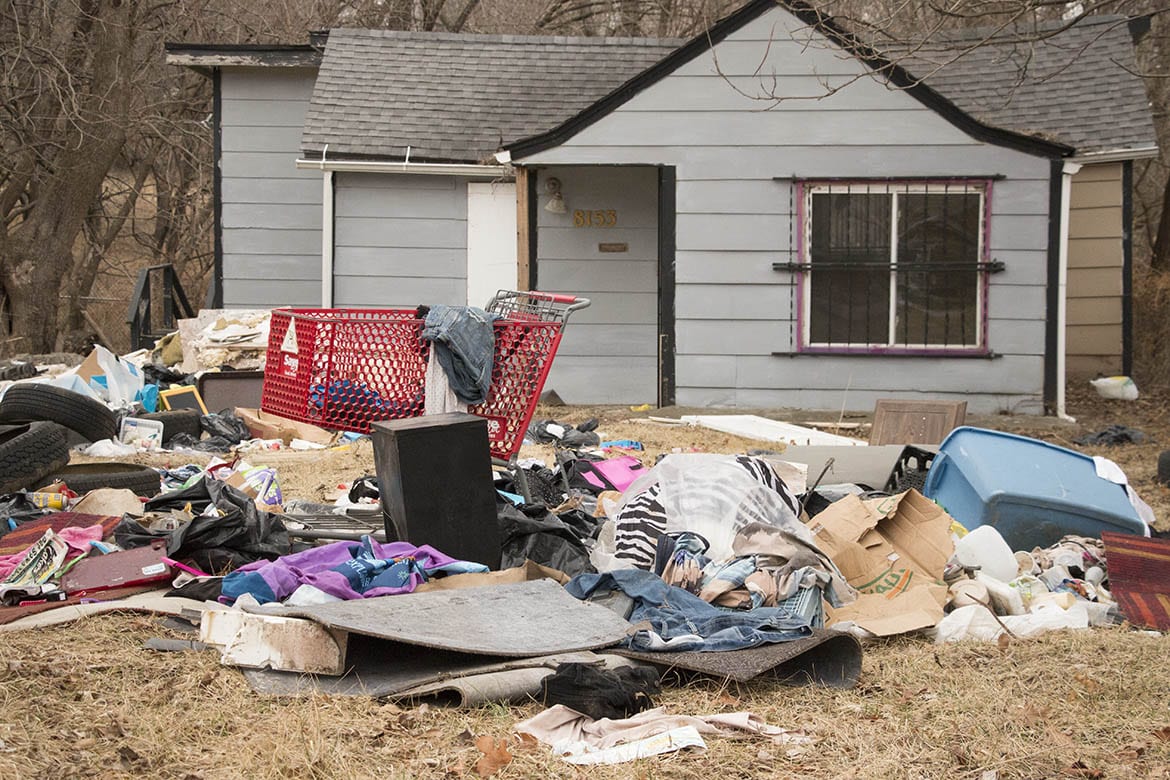 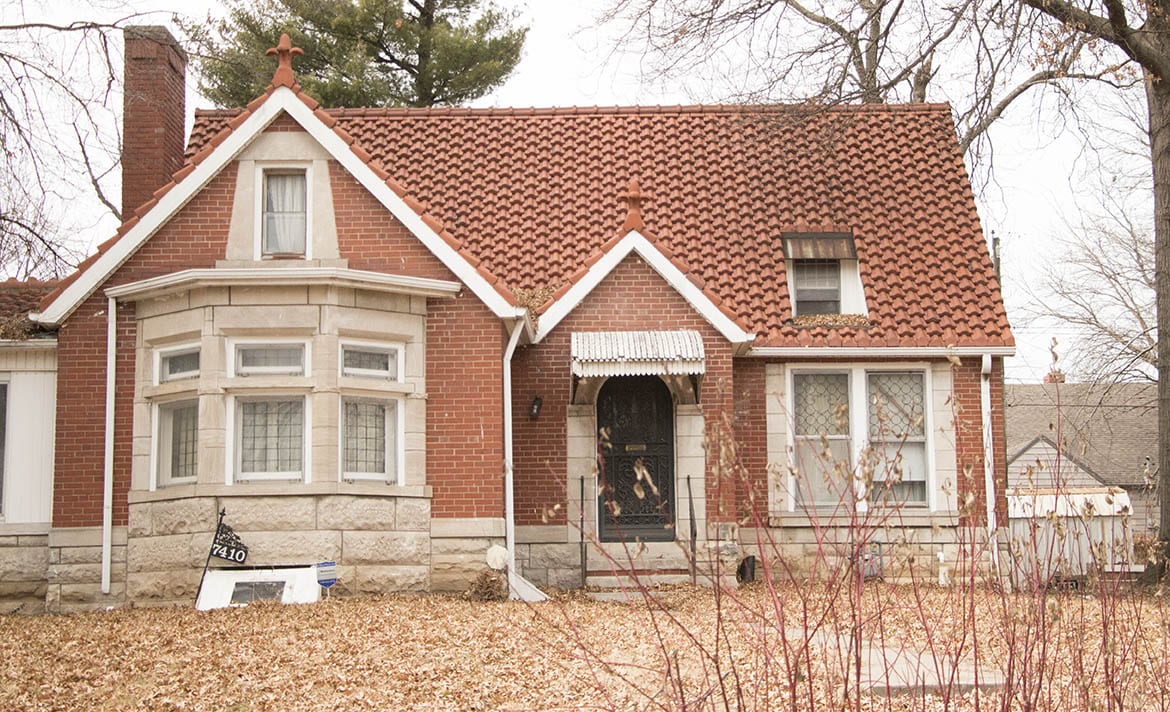 Fortunately, Legal Aid of Western Missouri was in the process of creating its Adopt-a-Neighborhood program. Using funding from the Washington, D.C.-based Legal Services Corp., the program pairs neighborhoods with law firms. The Marlborough Community Coalition was matched with Stinson Leonard Street LLP. It became the program’s first and most enduring partnership.

“They are real go-getters,” Stinson Leonard Street partner Rich Cook said of the neighborhood leaders. “We are just there to assist them. I kind of view us as the outside general counsel for the coalition.”

The firm helped the neighborhood group incorporate as a nonprofit, so it could receive grants and other assistance. And, along with Legal Aid’s own lawyers, it works with the coalition on housing issues.

Their primary tool is Missouri’s Abandoned Housing Act, a statute that enables nonprofit groups to take temporary ownership of properties that have been vacant for at least six months, are cited for code violations and are delinquent on city taxes. The community group petitions a judge for temporary possession of the property. If successful, it then seeks a buyer to fix up the house either as a place to live, sell or rent. 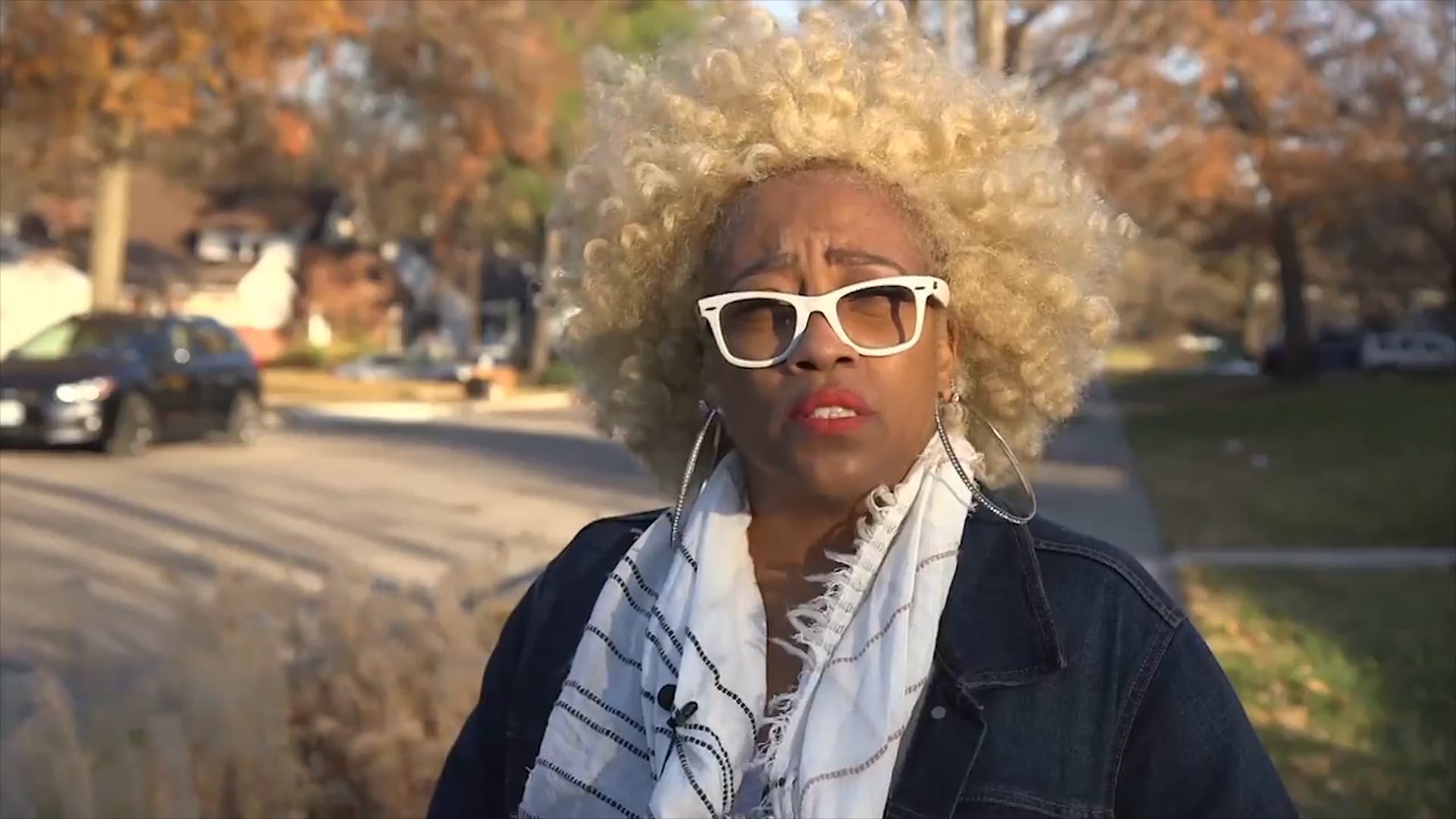 But it can take months to gain control of a property and find a buyer with good intentions and sufficient cash to do a good job — usually at least $25,000. Only a handful of properties can be reclaimed in a year’s time.

“There is a long list of problem property in Marlborough, but you chip away as best as you can,” said Jere Sellers, also a partner at Stinson Leonard Street.

Likewise, Kansas City’s Neighborhood and Housing Services Department is helping 26 Marlborough homeowners this year through its model homes repair program. Those are meaningful efforts, but small in the face of overwhelming need.

More dramatic changes can be seen in the city Water Department’s “green infrastructure” projects in Marlborough. It was the first Kansas City neighborhood to be selected for environmental improvements, totaling about $40 million, aimed at slowing down stormwater runoff into the sanitary sewer system.

Using ponds and terraces to collect runoff, contractors created park-like areas in three locations, including the site of a former decrepit strip mall on Troost Avenue.

More help came in the form of small rain gardens, new gutters and sidewalks in some locations, and sewer repairs. Neighborhood leaders are looking forward to the arrival of bike lanes and other quality-of-life additions.

They expect that the green infrastructure improvements and the repurposing of the two former school buildings will encourage responsible investors to buy houses in Marlborough.

That’s already happening in places. UC-B Properties, which has built or fixed up dozens of homes in neighborhoods stretching from Beacon Hill to Brookside, recently purchased a house across the street from the old Marlborough Elementary School.

“We like Marlborough,” said John Hoffman, the firm’s founder. “Our hope is people will see the benefit of moving east of Troost.”

Some already have. Nancy Phelps, director of marketing initiatives for the Greater Kansas City Chamber of Commerce, moved into Marlborough three years ago with her husband and two young daughters. They live in a 110-year-old house with a stone porch.

Her goal, Phelps said, is to see Marlborough continue to be a place where diversity is valued and “a great place for residents to live and work and play.”

Hershberger has been around long enough to understand how much work is involved in achieving that vision.

“It’s really hard to get people who have squatters in the house next to them to get together on a plan for inclusive housing,” she said. 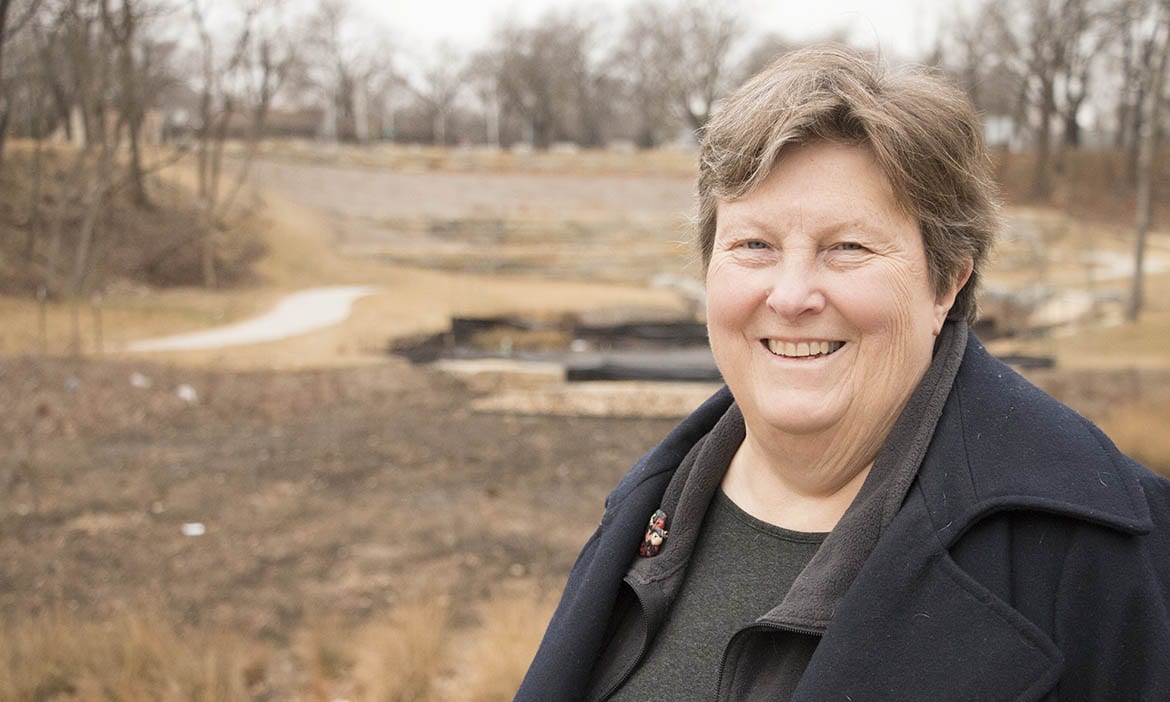 For the next five months, Hershberger will work full time as Marlborough’s healthy community program director. Funded by a grant from the Health Care Foundation of Greater Kansas City, her job will involve working with the community coalition and residents to set priorities around green spaces and health and safety for residents.

John Wood, Kansas City’s director of Neighborhood and Housing Services, acknowledges the magnitude of the task facing the community. “The city is putting a huge amount into infrastructure in Marlborough,” he said. “But there’s so much to do.”

The city will never have the money or capacity to solve the neighborhood’s problems on its own, Wood said. And he worries that the community coalition, relying on volunteerism, will run out of steam. He recommends that the coalition try to organize into a more formal structure, like a community development corporation, to be able to hire a staff, seek more funding and move the work along.

Wood talked about a section of The Paseo between 78th and 82nd streets that neighbors euphemistically call “Marlborough Village.” It once was, and could be again, a bustling district with restaurants and businesses like upholstery shops. But most of the buildings currently are owned and used by people looking for a place to store cars, boats and other large items — sometimes in violation of zoning restrictions.

“It’s still trying to discover itself,” Wood said. Several years ago, with help from the Mid-America Regional Council, residents conceptualized a vision for the strip that includes offices, housing, gardens and a farmers market. But it will take money and sustained effort to move the vision into reality.

For now, the day-to-day work of building a community is keeping everyone busy.

The Marlborough Community Coalition is seeking new board members. Its volunteers are planning the annual summer youth arts festival.

In partnership with the city and Bridging the Gap, an environmental nonprofit, the coalition is offering free trees for residents to plant in front of their homes. Neighborhood residents are working with developers of the Marlborough School, sharing memories that might help the building get designated as a historic property.

When they find time to look into the future, Marlborough leaders are resolute that change will come from within their community, not from outsiders.

“We want to get rid of blight. We would love to have people come in and invest here,” Thomas said. “But they should tell us what they’re going to do for the community. Marlborough will have to look carefully at the opportunities people want to present.”

One thought on “The Inside Job”